Accessibility links
Aging Satellites Threaten Climate Research Future Many of the U.S. satellites that collect climate change data were launched in the 1990s. With replacement satellites years away, the United States faces a big data gap when the current orbiters go out of service. It's like sitting on the edge of a cliff, says one climate researcher. 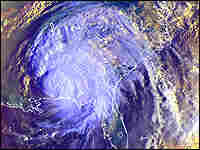 Satellite data allowed scientists to track Hurricane Ivan from its formation over the Atlantic Ocean to when it reached Category 5 strength. NOAA hide caption 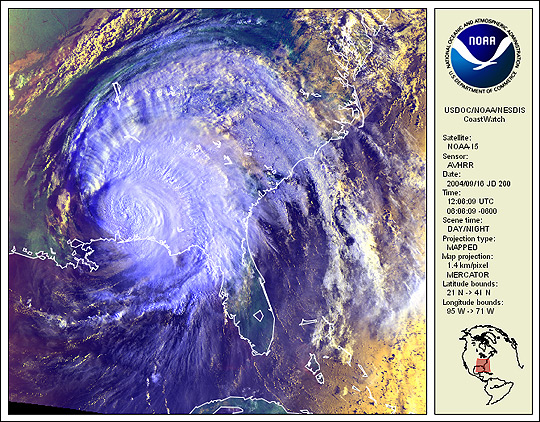 Satellite data allowed scientists to track Hurricane Ivan from its formation over the Atlantic Ocean to when it reached Category 5 strength. 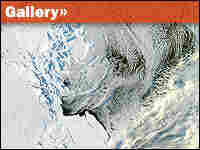 NASA satellites track changes in wind, water, land, atmosphere on all corners of the Earth.

The U.S. satellites that monitor climate change are aging, and replacements are years away, thanks to more than a decade of budget cuts and squabbling about which federal agency should run the climate satellite program.

Scientists say this means the United States will probably have to get along without some critical eyes in the sky at precisely the time it's making multibillion-dollar decisions about how to respond to climate change.

"We'll be blind for maybe a decade," says Kathy Kelly, an oceanographer at the University of Washington who depends on satellite data for her research.

As an example, she sites a satellite called QuikSCAT. For the past decade, it's been sending back a stream of data about ocean winds and hurricanes, which are affected by the changing climate.

But Kelly says the stream of data from that satellite could end any day now. "It's way past due," she says. "It's amazing that it still works."

No Replacements In Sight

Kelly says a proposed replacement for QuikSCAT won't be launched for years. But also, the replacement is designed for weather forecasting, so it's not accurate enough to do climate research.

And Kelly says the loss of satellites like QuikSCAT will leave the United States with a flawed record of changes in the climate.

To be useful, the climate record has to be highly accurate and span decades without any gaps. That's because climate change is happening in tiny increments over many years, Kelly says.

"For instance, with sea level, 3 millimeters a year is the signal," Kelly says. "It's tiny. And so every little bit of error matters."

Also, the climate record requires precise data on things like the thickness of ice sheets, the exact temperature of oceans and the chemical composition of the atmosphere. Weather satellites and other Earth-observing satellites generally don't measure these things.

But that ambitious program soon ran into budget cuts and delays, says Bruce Wielicki, a NASA climate scientist. And the satellite programs that did make it into orbit are now getting on the hoary side.

With no replacements immediately in sight, "we're basically sitting at the edge of a cliff," Wielicki says.

Wielicki says money is only part of the problem.

He says climate change is an issue that has fallen between two agencies: NASA, the space agency, and NOAA, the National Oceanic and Atmospheric Administration.

Wielicki says NOAA's top priorities have been fisheries and weather. NASA has focused on putting people in space and doing space science, not earth science.

"So you end up with two agencies, who are the primary climate agencies, having climate as the third priority," Wielicki says. "So how are you going to get climate done? And the answer is, you're not."

And to help with the money problem, the president's stimulus package includes hundreds of millions of dollars for climate research, including new satellites.

But Wielicki says it will take a long time for those steps to have any effect.

"The quickest you can get any new sensor up from when you seriously start is on the order of five years, and it can be as long as 10," he says.

In the meantime, old satellites will probably give out before new ones go up.

That will create gaps in the record. And those gaps will make it harder to predict things like how much the oceans will rise or how hot summers will be three decades from now.

Tom Karl, who's in charge of climate services for NOAA, says this is an urgent problem because satellite data will determine how the U.S. prepares for climate change.

Karl says it will be hard to know without good satellite data.