Accessibility links
In Search Of Answers, Teachers Turn To Clickers More teachers are equipping their classrooms with little keypads that let students instantly, and anonymously, answer questions. Teachers say the clickers are improving the quality of education, but some students feel like they're on a game show.

Read the All Tech Considered blog for more on how clickers and other technology are being used in the classroom. 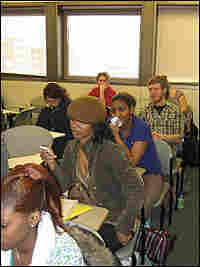 Students in professor Conor McLennan's class at Cleveland State University use clickers almost as much as a pen. Dan Bobkoff for NPR hide caption 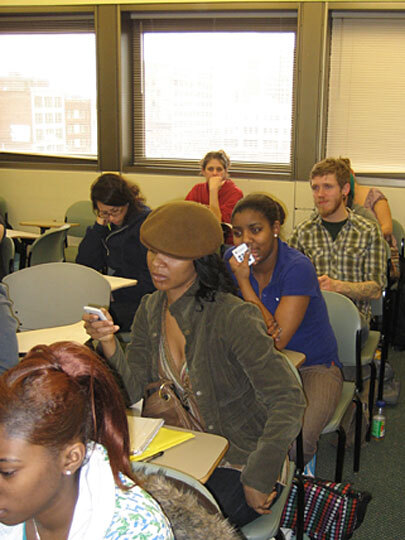 Students in professor Conor McLennan's class at Cleveland State University use clickers almost as much as a pen. 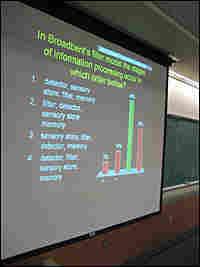 Students answer questions using the clickers, and the results are displayed instantly on a projector screen. Later, the professor can look at how each student answered individually. Dan Bobkoff for NPR hide caption 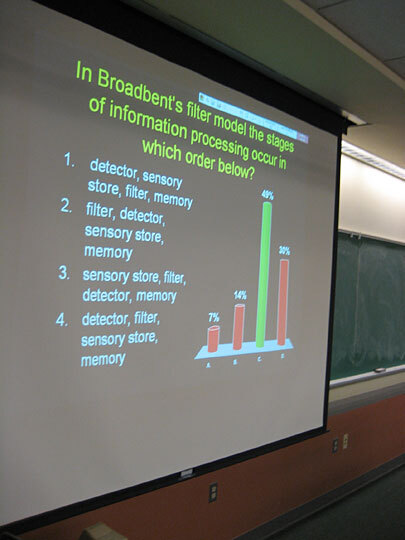 Students answer questions using the clickers, and the results are displayed instantly on a projector screen. Later, the professor can look at how each student answered individually.

Teachers know the blank stare. It can be hard to know what students are absorbing in class. Well, technology to the rescue.

More teachers are equipping their classrooms with little keypads — often called clickers — that let students instantly, and anonymously, answer questions. Teachers say the clickers are improving the quality of education by measuring how engaged students are in the material they are learning.

Before visiting Conor McLennan's Memory and Cognition class at Cleveland State University, it is difficult to see how clickers could change teaching.

McLennan uses the clickers for everything. His students have a pen in one hand and a credit card-sized clicker in the other. Whenever he has a question for them, it goes up on the projector screen.

"If you're interested in being interviewed after class ... for this story about your use of clickers and if you like them, you can respond yes," he tells his class. "If not, say no."

Allison Fifolt, a senior at CSU, is part of the 16 percent who answered yes. This is her first class using the clickers.

"It's good and it's nerve-wracking," Fifolt says. "You kind of feel like you're on a game show because you get to compete with everyone else."

When McLennan asks the class a question, the students stare at the question on the screen, on which a countdown appears. When the time is up, they punch in their answers.

Perhaps Psychology 372 isn't really as dramatic as Who Wants to Be a Millionaire, but the students did seem engaged. In fact, McLennan polled his class — with the clickers, of course — and found that 96 percent of them really like using them. By constantly polling, McLennan gets an instant read on how much of the material the students are absorbing.

"I thought people would be less likely to speak up because now they can respond anonymously, they don't have to open their mouth," McLennan says. "But it turns out, it's the other way around.

"They know everybody is answering the questions, everyone is in the same boat, so they are more likely to speak up and interact."

After class, McLennan opens up his laptop to see how each student voted on the questions. He does this to identify those who might need extra help.

One of the major makers of clickers — or student-response systems, as they are known in the industry — is Youngstown, Ohio-based Turning Technologies.

"Really, students outside of the classroom, their lives are filled with technology. And a lot of times we ask them to power down when they come into the classroom and not use that technology," says Brad Gant, who runs the company's education division "This is a chance to use the technology to engage the students."

Some of the newer clicker models even allow for open-ended responses beyond multiple choice. A few months ago, Turning Technologies released an application for the iPhone and BlackBerry. Someday soon, bringing a cell phone to class might be as essential as a pen.