Accessibility links
U.S.-Iran Tensions Highlight Choke Point of Gulf Oil The growing U.S.-Iran confrontation has raised fears that a conflict could threaten the oil-tanker traffic through the Strait of Hormuz. Ships from the Persian Gulf carry 40 percent of the world's crude-oil exports to global markets. 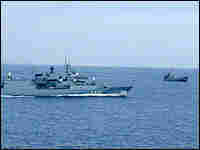 A Greek warship, escorting a convoy of American cargo vessels, sails between the convoy and a small Iranian navy vessel while passing through the Strait of Hormuz. hide caption 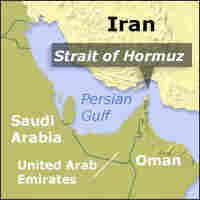 About 40 percent of the world's oil exports passes through the narrow waterway on its way from the Persian Gulf to global markets. Linsdsay Mangum, NPR hide caption 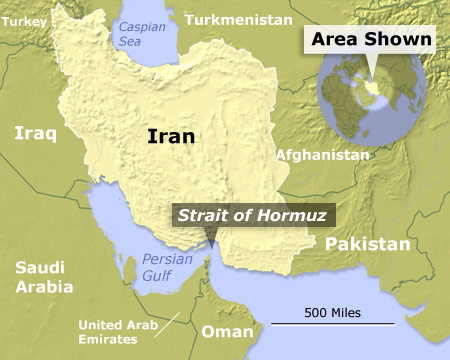 About 40 percent of the world's oil exports passes through the narrow waterway on its way from the Persian Gulf to global markets. 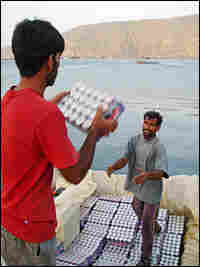 Iranian smugglers at the Omani port of Khattab load their boat up with flats of orange soda, destined to be sold at Iranian ports like Bandar Abbas. Hundreds of Iranian smuggling boats cross the Strait of Hormuz every day. Ivan Watson, NPR hide caption

At sunset, the docks in the tiny Omani fishing port of Khassab are humming with activity, as scores of Iranian smugglers load their small motorboats for the three-hour journey across the Strait of Hormuz.

Every day, hundreds of these tough sailors motor across the choppy waters to Iranian ports like Bandar Abbas, carrying everything from crates of orange soda and used-car engine parts to live goats, which are thrown one by one into the hulls of two-man boats.

The small-time smugglers crisscross the same narrow waterway between Iran and the arid cliffs and fjords of Oman's Musandam peninsula that serves as the vital gateway out of the Persian Gulf for countless tanker ships, which carry 40 percent of the world's crude-oil exports to international markets.

Jean Francois Seznec, a Georgetown University professor of political economy in the Persian Gulf, estimates that about 16 million barrels are exported from the Gulf through the Strait of Hormuz each day.

"If the straits were blocked, you'd see an increase of price of about $100 per barrel pretty quickly," Seznec says.

The growing confrontation between the United States and Iran has raised fears that a conflict could, among other things, threaten the oil tanker traffic through the Strait of Hormuz.

People in the region are worried about both the Americans and the Iranians, says Abdulkhaliq Abdallah, a political science professor at Emirates University in Dubai. "They are both leading us into... a military showdown, which is not in the best interests of this region."

Last winter, the United States launched the largest American naval military deployment in the Persian Gulf since the 2003 invasion of Iraq.

The USS John C. Stennis was one of two American aircraft carriers sent to the Gulf. It recently docked at a Persian Gulf port for several days of rest-and-relaxation leave after months at sea.

When Iranian Revolutionary Guards seized 15 British sailors and marines in March, the Stennis was ordered on short notice to conduct joint military maneuvers with another carrier, the USS Dwight D. Eisenhower. The exercise was an obvious show of force against Tehran.

That two-day exercise did promote a message of deterrence, says Bradley Johanson, the captain of the Stennis. He accused Iranian President Mahmoud Ahmadinejad of creating an international crisis, to distract Iranians from the country's economic problems.

Iran's response came in April, when Gen. Hossein Salami, the commander of the Islamic Revolutionary Guards Corps air force, told the Fars News Agency that his forces could interrupt the flow of oil through the Gulf.

"Iran can affect the flow of half of the world energy as soon as it wishes," he told the agency.

"The Iranians know our vulnerability in the Gulf is oil," says Robert Baer, a retired veteran of the CIA. "That's our Achilles' heel, and that's what they will hit in the event of a conflict."

A United Arab Emirates government official, who preferred not to be named, describes the threat this way: "The Iranians don't have to shut down the Strait of Hormuz. They just have to make it dangerous for ships to sail through."

The UAE official says Iran has military installations on the channel's northern banks, as well as weapons and military personnel stationed on several islands in the center of the Strait.

"Last night, as we passed through the Strait of Hormuz, they would come up on the radio every hour or so and query us, ask us what our course and speed was," he says. "We are in a vessel traffic-control system so we respond."

During the Iran-Iraq war of the 1980s, oil tankers were a frequent target. Attacks damaged hundreds of ships and killed hundreds of commercial sailors.

Anthony Cordesman, of the Center for Strategic and International Studies in Washington, D.C., says the Iranian military is practicing the techniques of tanker wars, which use mines and raids on tankers by small craft.

"Nobody believes Iran can take on the U.S. Navy," Cordesman adds. "But asymmetrically, it can attack tankers and make a significant impact on the oil trade."

Iran has an arsenal of surface-to-surface missiles, submarines and sea mines. But commercial sailors say their biggest fear is of an attack by small, fast boats.

"On ships that I've sailed on, we're always on the lookout for small boats," says Alexander Soukhanov, a U.S. merchant marine officer who has sailed many times through the Strait of Hormuz on American cargo ships.

"That's especially been the case since the bombing of the Cole," he says.

In October 2000, 17 American sailors were killed when suicide bombers attacked the American destroyer, USS Cole, with a small boat loaded with explosives in the Yemeni port of Aden.

The tensions in the Persian Gulf have prompted one oil-producing state to explore alternatives for its exports. The United Arab Emirates has announced plans to build two oil pipelines that would bypass the Strait of Hormuz.

But industry analysts warn that this alternate route would only be able to transport a fraction of the total amount of oil that sails through the Strait on any given day.