Accessibility links
Visiting Bajaur, Pakistan, A New Piece Of My 'Home' Junaid Khan is from northwest Pakistan, yet he has never seen large parts of the landscape there. This essay chronicles his first trip to Bajaur, a place he had always wanted to visit — and which he found to be very different from the place in his imagination.

Visiting Bajaur, Pakistan, A New Piece Of My 'Home'

Visiting Bajaur, Pakistan, A New Piece Of My 'Home' 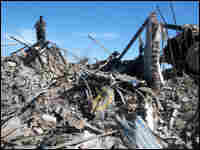 A member of the Frontier Corps stands at the ruins of Inayat Kalay Bazaar in Khar, the capital of Bajaur in northwest Pakistan. Junaid Khan for NPR hide caption 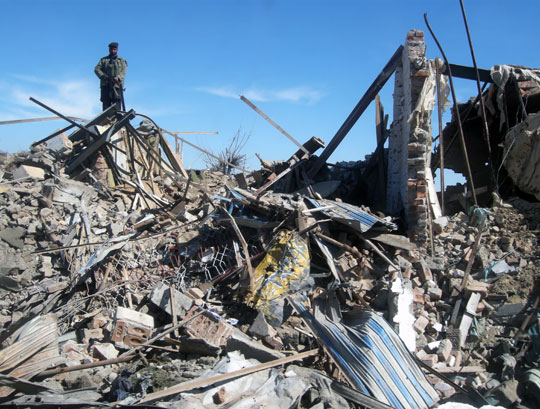 A member of the Frontier Corps stands at the ruins of Inayat Kalay Bazaar in Khar, the capital of Bajaur in northwest Pakistan. 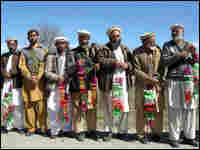 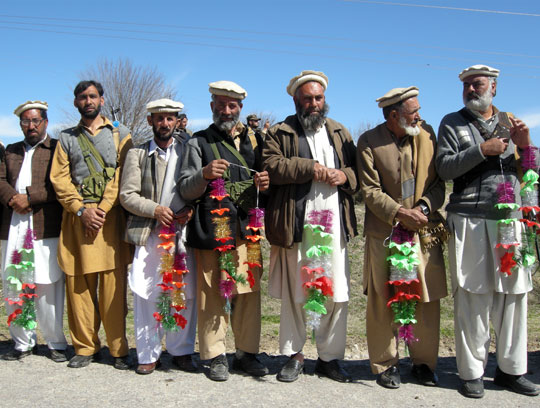 Tribesmen wait to meet Pakistan army officers and put garlands around their necks.

Junaid Khan, an editorial assistant with NPR, is from northwest Pakistan, yet he has never seen large parts of the landscape there. This essay chronicles his first trip to Bajaur, a place he had always wanted to visit — and which he found to be very different from the place in his imagination.

Bajaur is a pocket of land at the north end of the tribal belt — the area along the border with Afghanistan seen by the United States as the epicenter of radical armed Islamists.

Last August, the Taliban overran Bajaur, besieging its largest town and turning it into a no-go area for outsiders, including Pakistanis. The following month, Pakistan's military launched an offensive, sending in combat helicopters, heavy artillery and fighter jets. A third of Bajaur's 1 million people fled the fighting to the homes of relatives outside the tribal belt or camps for displaced people. More than half of them have now returned — to find considerable destruction caused by the bombardment.

Some six months later, the Pakistani military says it has driven out the militants.

A few days ago, it flew a party of journalists by helicopter into Bajaur, to show off its accomplishments. I was part of this group.

I had been dreaming of visiting the northern tribal belt all my life — and was surprised by what I found.

A few years back, I was near Bajaur working on an assignment to find a potential suicide bomber — a 13-year-old schoolboy trained and brainwashed for his "holy" task. One of my friends — a local — urged against crossing into Bajaur. That was a time when the Taliban had newly — but strongly — emerged on the scene and had started patrolling roads at night.

"It is dangerous to move in," my friend said. "The Taliban are out there to capture, kill and loot. And your car has a Pakistan army logo on its back; you will be a desirable target for the militants." The car was rented, and I hadn't noticed the label.

The charm of life overcame the charm of Bajaur, and I returned without seeing the "fabled land."

But I had another chance this past weekend. And Bajaur was not what I had imagined, nor what I had been told it would be.

I had imagined that the mountains of Bajaur would be as thick, leafy and sprawling as the forests of Colombia, where drug barons have set up safe bastions. Like all other Pakistanis, I would often swallow the government's story, when it talked of the geographical hindrances in the way of fighting the war on terror effectively.

But the mountains of Bajaur stand barren like big mounds of sparkling sand. Militants cannot melt into these mountains. On a sunny spring day, the naked eye looking down from a chopper window should be able to spot a bunch of militants on the mountainside.

And speeding along the road in a van through Bajaur's main town of Khar, I realized that Bajaur was not a land frozen in medieval times. Not all of the houses were made of mud. I saw some beautiful and costly bungalows, advertisements for soaps, fans and — surprisingly — Pepsi. (Some religious parties here say Pepsi stands for "Pay Each Penny to Save Israel" — and repeatedly urge masses to boycott it. But the appeal of boycott has failed to rein in people's thirst for Pepsi.)

Quite interestingly, I saw schools, colleges, a sports complex — and hardly a madrasa along the main road. These were the unmistakable signs that Bjaour had embraced modernity. As is against the stereotypical images of tribal people, I found some people without beards. They looked at us with curiosity and we looked at them with matching curiosity. And, I think, we both realized that there's a strong thread of humanity, that there are many commonalities that bind the people of the world.

After a few kilometers on the road, the whirls of dust started hitting our faces as we neared the former Inayat Kalay Bazaar. Judging by its size, one could safely say that it was busy and noisy before it was reduced to debris by the Pakistan army in its grand operation to flush out militants. The corrugated sheets, concrete blocks, twisted shutters of the shops and wires are now the scary remains of the bazaar.

The bazaar will one day rise up into more a beautiful shape on the back of the hope still alive here.