Accessibility links
IMF Chief Backs Global Solution To Economic Crisis The global economic crisis requires a global solution, and fixing what ails the world's banks will take time, says the head of the International Monetary Fund. A recovery should begin in the middle of next year, but that depends on the right policies being implemented, Dominique Strauss-Kahn tells NPR in an interview. 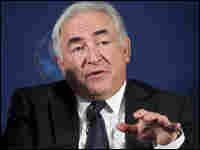 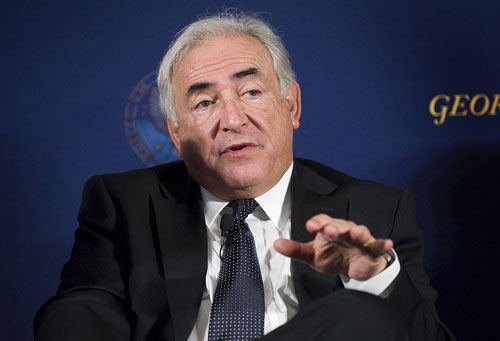 The global economic crisis requires a global solution, and fixing what ails the world's banks will take time, the head of the International Monetary Fund says.

Asked if the IMF sees an end to the crisis, Dominique Strauss-Kahn tells Robert Siegel, "Well, it depends on what you call an end. We see the beginning of the recovery in the mid of 2010, providing that the right policies are implemented. Part of them are implemented so far, but some others things have to be done, and it takes time."

NPR: This week, President Obama and British Prime Minister Gordon Brown are going to talk about a global New Deal. At the same time, we're seeing countries in Europe unable to agree on a European New Deal. Is it realistic to think of global solutions to the world economy when Europe can't even manage a continental solution to the economy?

You're right in saying that obviously, this weekend, the Europeans were not at their best. They were almost unable to find any kind of common solution. So that's the reason why I'm a bit worried about the implementation of the right policies, especially in the bank restructuring.

As far as the different stimulus packages are concerned, what has been done is almost OK. But the second leg of the plan has to be cleaning the balance sheets of the banks, and it doesn't go very quick.

There are countries not only in the European Union, but even within the eurozone in need of help. And some of the wealthier, older countries in Europe don't seem to be there for them. You've warned of a backdoor protectionism. Could there be any better example than some countries of Europe looking out for their own populations more so than the entire eurozone?

Well, that's probably one of the weaknesses of the eurozone. The eurozone is not yet completed; the eurozone has a single currency but not a single economic policy. And that's why you may see some countries of the eurozone, like Greece, for instance, having problems. And there's no really built-in mechanism in the eurozone to deal with this kind of question. That's probably the reason why the head of state governments were a bit uncomfortable with the solution to take.

But we all know that this kind of protectionism doesn't work. Everybody has to avoid a domestic solution and try to collaborate on a global solution.

Readers of the New York Times on Monday might have seen a story on the front page out of Ukraine, which was pretty alarming: lines at the banks — people wanted to get their money out — protests by workers who haven't been paid, a loss of confidence in political institutions. The IMF says Ukraine has not done enough to merit its next installment of aid. Is that country at risk of abandoning free-market economics, if not democracy right now, given the depth of their economic crisis?

The problem with Ukraine is a specific problem, because on top of the economic problem that is experienced today by most Eastern Europe countries, you have a political problem and a difficultly to talk between the president and the prime minister. But I think that in the coming days, things will come back to normal.

Given the scale of the economic crisis, is it too big for the International Monetary Fund? That is, is your role going to be limited ultimately to the Icelands and the Pakistans and perhaps the Ukraines of the world, but the other problems are just too big for you?

No, the problems are not too big. It's just a question of the amount of money. We have a certain amount of money we can use. ... The international community is now in the process of doubling the reserves we have and, so, consistent with that we will be able to deal with all the problems coming.

But of course we are not facing as we have in the past only an Asian crisis or only a ... Latin American crisis, but a global crisis. So we have problems in all parts of the world, and every day I have new countries lining up in front of my door asking for some support — in Europe, in Asia, in Latin America, even in Africa.

So the problem is becoming bigger than it was in the past — not too big for the IMF, especially an enhanced IMF — but obviously a bigger problem than it was previously.