Accessibility links
Applying Peace Corps Ideas To Hometown In Need Mark Rembert and Taylor Stuckert decided to put aside work in the Peace Corps to see if they could help their own community of Wilmington, Ohio. They hatched a plan to try to get funding for an environmentally friendly project that they hope will put hundreds back to work. 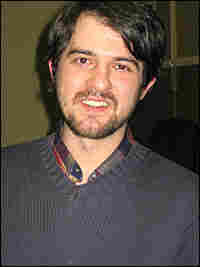 Mark Rembert, 24, was set to go to Ecuador with the Peace Corps when the largest employer in his hometown of Wilmington, Ohio, made a decision that left thousands without jobs. He decided to return home instead. Pam Fessler/NPR hide caption 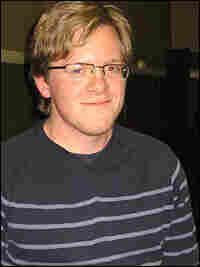 Taylor Stuckert, 23, who spent time with the Peace Corps in Bolivia, says he hopes he and Rembert can help bring lasting economic change to their hometown. Pam Fessler/NPR hide caption

With every disaster comes opportunity: That's what two young men from Wilmington, Ohio, thought when they saw the economic devastation in their hometown, where thousands have lost their jobs.

Mark Rembert and Taylor Stuckert decided to put aside work in the Peace Corps to see what they could do to help fix their own community — and they hatched a plan to start an environmentally friendly project that they hope will put hundreds back to work.

The two are as surprised as anyone to find themselves back in Wilmington, a rural community southeast of Dayton. When they graduated from the local high school in 2003, they couldn't get out fast enough.

"If you asked me six months ago if I would want to live in Wilmington, Ohio, if it meant that I got to work closely with the community, be around my family, you know, earn nothing, when I had a really high-paying job in New York, I would say, no, absolutely not," says Stuckert.

A Hope For Lasting Change

Stuckert, 23, has a still-boyish face and blond, wavy hair. Until last fall, he was in the Peace Corps in Bolivia, but he had to be evacuated because of unrest there. Earlier, he had worked at a law firm in New York. He was trying to figure out what to do next when his good friend urged him to return home.

"I was like, you have to come back. There's so much energy here right now," Rembert says.

Rembert is 24, with dark hair and a beard. He almost bounces with enthusiasm. He also was accepted to the Peace Corps and was set to go to Ecuador. But then, DHL Express, Wilmington's largest employer, announced it was going to shut down its domestic air-freight operations, leaving thousands without jobs.

"As soon as the announcement came out I knew, wow, this is going to be some sort of case study in how a small community deals with, you know, an incredible economic shock," Rembert recalls. "So I came back, and I immediately started a blog."

That was his way of trying to figure out what to do. Rembert and Stuckert like to talk things over a lot. And they began to think that maybe some of the Peace Corps philosophy, of helping communities help themselves, might be just what Wilmington and surrounding Clinton County needed — that this might be a chance for some real economic change. Something, Stuckert says, that would last.

"We think of development as building homes and putting people to work. But if the home doesn't stand up throughout the years and if the job doesn't stay, then the development wasn't really development because it wasn't sustainable," Stuckert says. "And that was something the Peace Corps really taught, and that it's not about going in and doing these huge projects."

It's more about teaching people, through smaller projects, how to take charge of their own economic fate, and not to be dependent on a single employer. So last fall, Rembert wrote a letter to the editor of the local paper with an idea.

"Let's designate Clinton County as the first green-enterprise zone. We had no idea what that meant," he says with a laugh.

But it did get people talking, which is what they wanted. Soon they had a Web site and an organization called Energize Clinton County. A local businessman gave them an empty storefront to set up shop. Rembert and Stuckert developed a more specific plan: to get funding to weatherize thousands of county homes. They say it will create more than a thousand jobs and save homeowners $3 million a year in energy costs.

Stuckert says it can also be a model for the nation.

"What if we come to this understanding that, wow, weatherizing a lot of homes at once creates a quick return, a huge economic stimulus," he says. "Then we don't have to have this debate in Washington about whether or not weatherization is a viable economic stimulus. We'll know."

So now, they are waiting to hear whether their bid for $30 million in federal stimulus funds will be accepted by the state. They have also proposed tax incentives for green businesses and are working on a plan to create community gardens.

Local leaders, such as Wilmington Mayor David Raizk, have been supportive.

"I watched those kids in high school," Raizk says. "And, you know, they've come up with an idea. We're going to make sure that we can do whatever we can to try to help them with that idea. I couldn't be prouder to be mayor of a community like that."

And at this point, people in Wilmington are willing to try almost anything. Rembert says he knows that he and Stuckert might not be getting so much attention if people weren't so desperate — and scared — because none of the old rules seem to be working.

"The rules in Clinton County were, if you work hard, you show up to work on time, you'll have enough money to have a decent life, to send your kids to college. Sort of the American contract," he says. "And that rule doesn't apply to a lot of people now in this county, and people are trying to figure out what's the new rule."

That's where Rembert and Stuckert hope they can help — with some ideas and energy, and maybe some inspiration. They think the current economic crisis will be their generation's defining moment, and they wouldn't want to be anywhere else.