Accessibility links
Movie Review - 'Tokyo!' - Getting To Know Tokyo, One Story At A Time This surreal triptych, each segment directed by a non-Japanese filmmaker, follows a wannabe filmmaker, a violent outsider and a reclusive young man as they navigate the megalopolis. 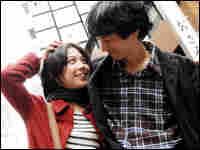 Special Delivery: Pizza provides a Tokyo shut-in his only contact with the outside world. Liberation Entertainment hide caption

Special Delivery: Pizza provides a Tokyo shut-in his only contact with the outside world.

If there are 35 million stories in greater Tokyo — one for each resident — then Tokyo! is barely a beginning. This omnibus film has only three episodes, linked by their location and a shared taste for surrealism.

None of the picture's writer-directors is Japanese, but Michel Gondry, Leos Carax and Bong Joon-ho clearly know their way around the world's largest metropolis. All three make clever use of Tokyo locations and play on themes common in Japanese animation: metamorphosis, the advancing fusion of humanity and technology and the eruption of buried historical traumas.

The movie opens with its best effort, directed and co-written by France's Gondry (Be Kind Rewind). In "Interior Design," a young couple from the provinces arrives in Tokyo by car. (First mistake.) Would-be filmmaker Akira (Ryo Kase) and girlfriend Hiroko (Ayako Fujitani) move into the tiny apartment of school pal Akemi (Ayumi Ito) and start looking for permanent accommodations.

The available lodgings are expensive and dismal, however, and Akira is more focused on showcasing his amateurish first feature than on practical matters. He and Akemi agree that Hiroko isn't much help, but she's the one who retrieves Akira's equipment after their Honda is (inevitably) towed.

"I'm the girlfriend," she explains apologetically at Akira's screening, and soon she's less than that. Low self-esteem leads to transformation, and a new version of her doormat role. But maybe that's not so bad.

The most confrontational of the chapters is "Merde," written and directed by a great lost talent of French cinema, Leos Carax (The Lovers of the Pont Neuf). The title, that familiar French vulgarism, turns out to be the name of the central character, who arises from Tokyo's sewers to hassle pedestrians during a long tracking-shot rampage through the upscale Ginza district.

Bearded, red-haired and speaking gibberish, the creature is an amusing personification of the Japanese fear of the gaijin (literally, "outside person"). But then Merde starts throwing grenades, and Carax suggests that he's enacting revenge for Japan's World War II crimes.

As Merde is hauled into court, defended by a French lawyer who speaks the defendant's arcane lingo, the satire sprays like water from an untethered hose: Such issues as terrorism, xenophobia, TV news and religious cults are invoked, but to little effect. Ultimately, it seems Carax wants to ruffle Japanese sensibilities just for the heck of it.

The slight but likable "Shaking Tokyo," the final segment, was written and directed by Korea's Bong Joon-ho (The Host). Its protagonist is a hikikomori, one of many young Japanese men who never leave home.

Supported by his father, the unnamed shut-in (Teruyuki Kagawa) reads extensively and collects obsessively: He has all the boxes from his weekly pizza delivery.

The man is driven outside by two earthquakes, only one of them actual. The more lasting quake is the pretty pizza-delivery woman (Hula Girls star Yu Aoi), who collapses in his home. In a sci-fi touch, he revives her by pressing a button on her arm. Later, he ventures into the streets to find her, discovering that Tokyo has an acute case of agoraphobia.

Like all such projects, Tokyo! is only as effective as its weakest piece. So the movie slides disappointingly downhill from its opener, which despite its fabulism has the strongest sense of the real Tokyo. Japanophiles (and Yu Aoi fans) will want to stay till the end, but less committed viewers may be tempted to catch an early train home.