In principio, for mixed chorus & orchestra 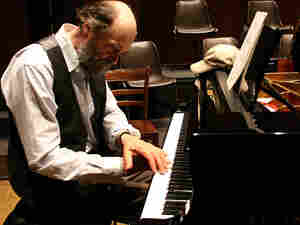 It's no secret that many listeners have trouble warming up to contemporary classical music. But a few composers have cultivated styles more accessible for the average listener. Now in his 70s, Estonian-born Arvo Part is among these composers, and the compositions on this new CD, In Principio, reveal many of the techniques of his mature style.

Cecilia, vergine romana, one of six works on the album, recounts the story of St. Cecilia, the patron saint of music. She was martyred for her faith and remembered for hearing heavenly voices. At first, the entry of the strings and voices seems traditional, something that might have been composed in a past musical age. But what happens later in the piece shows an important aspect of Arvo Part's craft: The composer turns these traditional melodies in on themselves, resulting in something new and something that is distinctly modern.

Part shows another technique in a work called Mein Weg, or My Path: The constant repetition of a few musical ideas evolves gradually to create a fascinating, hypnotic web. The composer's style here is sometimes called minimalist because of these repeated rhythms and melodic bits.

The title track of this CD is the five-movement work In Principio — dedicated to conductor Tonu Kaljuste, who leads the various ensembles on this recording. Like all the music on the album, In Principio is often stark as majestic drama, but also tender in the portrayal of the human condition.

I don't use the word masterpiece casually. But I've spent several weeks studying the musical scores of these works, examining the extraordinary details of the composer's craft. Because of that intimate involvement, I'm confident that several of these works are true masterpieces and will be heard for a long time to come.