Accessibility links
Afghan Border Police Make Progress, Slowly Afghanistan's border police are the first line of defense against insurgents along the country's border with Pakistan. U.S. soldiers are trying to help improve the understaffed and undertrained force, but corruption and tribal ties are impeding progress. 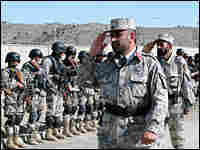 Maj. Gen. Jan Nabi Molakheil, who is in charge of Afghan border police in Khost, Paktia and Paktika provinces, reviews troops at a new police compound in Khost. Half of the police here have undergone training by the U.S. Soraya Sarhaddi Nelson/NPR hide caption 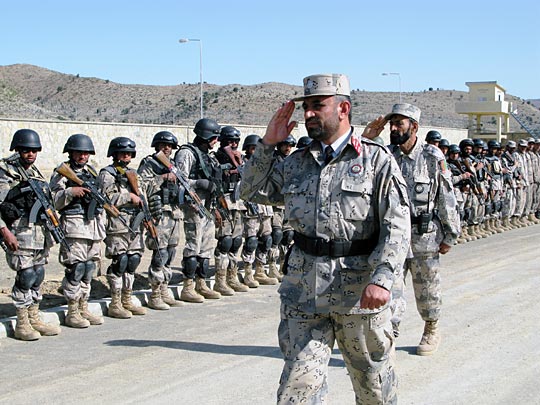 Maj. Gen. Jan Nabi Molakheil, who is in charge of Afghan border police in Khost, Paktia and Paktika provinces, reviews troops at a new police compound in Khost. Half of the police here have undergone training by the U.S. 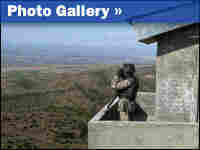 Efforts To Secure A Lawless Border 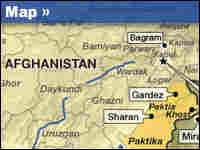 Some of the most volatile areas of Afghanistan's border with Pakistan lie in Khost, Paktia and Paktika provinces, which are under the jurisdiction of Maj. Gen. Nabi Jan Molakheil of the Afghan border police. Lindsay Mangum/NPR hide caption 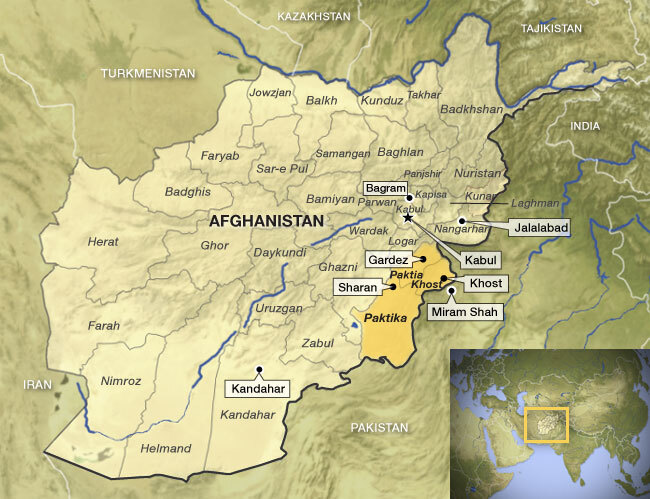 Some of the most volatile areas of Afghanistan's border with Pakistan lie in Khost, Paktia and Paktika provinces, which are under the jurisdiction of Maj. Gen. Nabi Jan Molakheil of the Afghan border police. 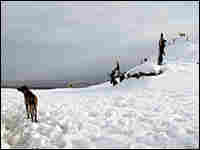 Afghan border police in the Gaway area of Paktia province rely on two dozen feral dogs to help guard their side of the border with Pakistan. Soraya Sarhaddi Nelson/NPR hide caption 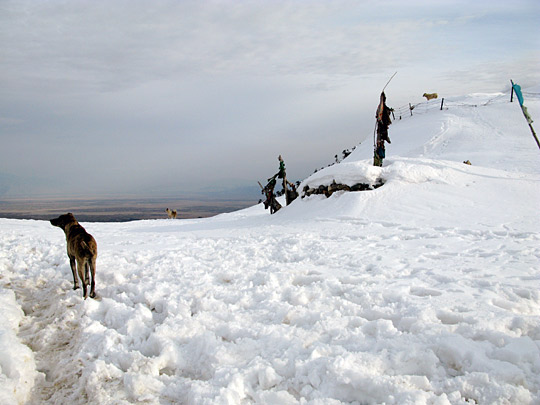 Afghan border police in the Gaway area of Paktia province rely on two dozen feral dogs to help guard their side of the border with Pakistan. 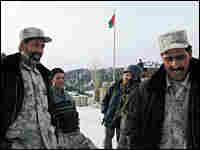 Border guards at Gaway say they have no way to remove snow from their posts or the nearby road. They use their feet to kick it aside or use U.S.-provided trucks to create ruts. They also say that the government does not give them enough wood to keep warm in the winter. Soraya Sarhaddi Nelson/NPR hide caption 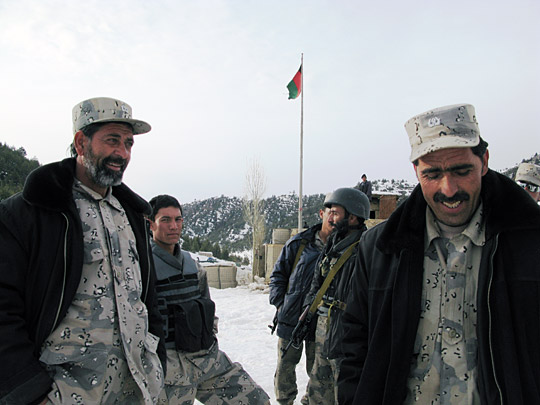 Border guards at Gaway say they have no way to remove snow from their posts or the nearby road. They use their feet to kick it aside or use U.S.-provided trucks to create ruts. They also say that the government does not give them enough wood to keep warm in the winter.

NPR's Soraya Sarhaddi Nelson spent two weeks traveling with the U.S. military to remote and difficult spots along the long border between Afghanistan and Pakistan. This is the second of two reports on the struggle to secure this critical frontier.

Securing the volatile, 1,500-mile-long border Afghanistan shares with Pakistan is a top priority for U.S. officials. But it's a job they believe should be done by the Afghan border police, rather than the NATO-led coalition there.

By most accounts, the Afghan border guards are not up to the task. The force is seen as understaffed, poorly trained and corrupt. And unlike the country's army and national police in recent years, the Afghan border police have been largely ignored by the international community.

That is, until recently.

Now, the U.S. is beginning to turn its attentions to strengthening the border police in this wild and remote terrain.

The drive to border posts in a corner of Afghanistan's eastern Paktia province illustrates some of the challenges the force faces. The ride is painful and treacherous, even in four-wheel-drive pickups the Americans recently donated to a local commander, Col. Bismullah, and his men.

Bismullah, who like many Afghans uses just one name, is a soft-spoken former teacher and head of a battalion of Afghan border police. He says the single-lane dirt and rock road is particularly difficult in the winter, when this 9,000-foot-high area called Gaway is covered in ice and snow.

His border guards, who live in mud huts, say they don't have anything — not even a shovel — to clear a path. So they simply kick at the snow or use the new pickups to create ruts.

Still, this border police battalion is in better shape than most in Afghanistan.

The guards in Gaway are part of a new American program to beef up the police force along the Afghan-Pakistani border. In addition to the 31 new Ford pickups Bismullah's men received, they are getting intensive training and new guns, ammunition and other equipment, much of it issued at regional training centers run by the State Department.

The State Department, despite repeated requests, refused to let NPR see information on the training, which is done by the military contractor DynCorp in this part of Afghanistan.

U.S. troops also are mentoring border police officers in how to search and patrol the area's tree-covered mountains.

U.S. Maj. Gen. Richard Formica heads the Combined Security Transition Command in Afghanistan, which is working to strengthen the Afghan military and police. He says Afghans need to take care of their own borders.

"Would it be easier for the coalition to do that? Maybe. Would it be right? Heck no. This is about building capability and capacity for the Afghans," he says.

Patrolling — Or Not — A Porous Border

The border guards in Gaway look like they could use the help. They say they can't see much from their posts, which are surrounded by trees and peaks. But they don't go on patrol a lot, either, relying instead on feral dogs to attack people sneaking across the border via remote goat trails or forest paths.

Nor do these guards always check the handful of cars that cross into the area. The guards barely glance at a pickup that rumbles past, hauling a mound of unseen items covered by a tarp. The driver is a local, they say dismissively, just a shopkeeper who went to Pakistan for the day.

Nevertheless, Gaway is one of the safer parts of the long, porous border that insurgent groups use to re-supply their fighters and seek sanctuary from Afghan and Western forces.

While militants linked to fugitive warlord Gulbuddin Hekmatyar cross back and forth in the area, the Afghan tribes around Gaway are loyal to the government in Kabul. Tribal men make up most of the local force, as they do in Khost and Paktika provinces to the south.

That's due, in part, to the Afghan major general in charge of the border police in this three-province region, Nabi Jan Molakheil.

A bearded officer who wears a camouflage uniform, Molakheil alternates between cajoling and browbeating village elders and local strongmen to support the government in Kabul over insurgents like Jalaluddin Haqqani.

Haqqani was linked to the bombing of a luxury hotel in Kabul in January 2008 and founded a militant network in Khost province.

Supporting such men isn't jihad, it's a crime against humanity, Molakheil argues, banging his fist on a table during a recent tribal gathering in the province's Terrazai district.

He has been persuasive enough to get nearly 700 new recruits recently from Khost and the neighboring border provinces. Recent raises and new bonuses for border guards also have helped.

But Molakheil still has just over half of the border guards he is supposed to have. That's partly because his battalion commanders have lied about how many men they had on their rosters in the first place: a lie that allowed them to pocket Western money being paid for border police salaries and upkeep.

A third of his commanders were removed last year after being accused of corruption. Two more were summoned to the interior ministry in Kabul in the past couple weeks to answer similar charges.

American advisers to the border police say in the future there will be more oversight, which should keep corruption in check. For one thing, U.S. trainers are collecting fingerprints and other information from each officer who goes through the eight-week training, so they know exactly who is on the force.

Lt. Col. Raymond Kent, a National Guardsman from Laramie, Wyo., who is Molakheil's senior American adviser, says the training also is beneficial to curbing bad behavior on the part of border police.

He says the graduates from the State Department-run training centers not only look and act more polished, but are also more confident and motivated to protect their country.

Kent says last month, some of the new graduates from Paktika province set up traffic checkpoints that led to the arrests of several insurgents linked to roadside bombs and attacks on Afghan and coalition forces.

Last month's reassignment of a U.S. Army battalion from the battlefield to the border to mentor Molakheil's men will allow for a lot more one-on-one training and spot checks.

Still, not everyone is convinced beefing up the border police to secure the border is the answer. Among them is Christine Fair, who co-authored a recent U.S. Institute of Peace report on the need for a game-changing strategy in Afghanistan.

She worries that the Americans are building up Afghan forces such as the border police in order to help the U.S.-led coalition fight the growing insurgency and not because of Afghanistan's needs.

"And so it's very ironic that we are trying to build a sovereign state that can't afford the security architecture we are building for it," she says.

Fair predicts that even with a larger and better-trained border police force, the insurgency will continue to grow in response to the increasing number of American and NATO troops who are coming to the country.