Accessibility links
Movie Review - 'Watchmen' - Comics Heroes Who Should've Stayed On The Page If you're a comics fan, this is the weekend you've been looking forward to — Watchmen finally hits the big screen. Critic Kenneth Turan says the long wait was hardly worth it. 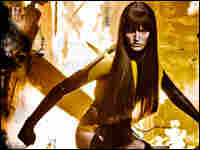 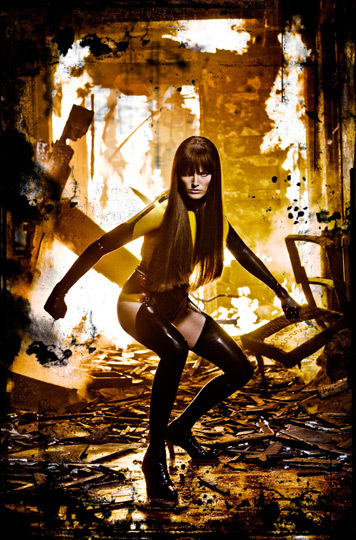 'Our Days Are Numbered' 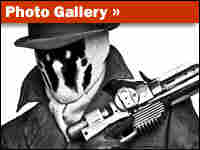 On Set With The Watchmen: Character Portraits

Watchmen was a landmark as a graphic novel, but as a film it's only pedestrian.

But it's not a question of fidelity: The film has been quite faithful to the original, a complex yarn about a nefarious plot to eliminate costumed superheroes from an alternate-reality America they've protected and defended.

Some of these superheroes have retired, while others, like the psychotic Rorschach, continue working clandestinely. And then there's the only being in this world with true superpowers, courtesy of your standard scientific experiment gone horribly wrong: He's a government employee now, and they've named him Dr. Manhattan.

After I saw this movie, I went back to the graphic novel. I was struck again that what made Watchmen a sensation was not its plot, but a structural denseness and complexity — the way it used multiple elements to comment on the core story in an almost Talmudic way. That essence is close to impossible to re-create on-screen, even with a nearly three-hour running time.

It may seem like a no-brainer to turn a graphic novel into a film — hey, they're both visual media, right? But this turns out not to be the case. A narrative with the texture and complexity of Watchmen demands to be on the page, demands to be read again and again before all its secrets are revealed, and film simply doesn't have the time for that.

What went wrong with Watchmen is not really anyone's fault. It never should have been turned into a film in the first place.

Studios think they can make hundreds of millions of dollars out of fanboys. Maybe in an alternate reality, but not in ours.