Accessibility links
'Scheherazade,' 1001 Nights Retold in a Symphony For centuries, storytellers of the Middle East have been retelling the tales of Sinbad and Aladdin. But the first teller of those tales, according to legend, was a young bride named Scheherazade. Rimsky-Korsakov spins the tale in music. Marin Alsop conducts.

'Scheherazade,' 1001 Nights Retold in a Symphony

Bedtime stories took on a new meaning for Scheherazade. Her husband, the Sultan, had the nasty habit of marrying a woman at night and killing her in the morning.

So Scheherazade thought up a plan. Every night she would tell him a story, and leave it hanging. 1001 captivating stories later, he decided to keep her.

These Tales of the Arabian Nights inspired Russian composer Nikolay Rimsky-Korsakov to compose a symphonic suite called Scheherazade in 1888. In the hands of a good orchestra and conductor, it's a technicolor tour de force.

Conductor Marin Alsop says a successful performance of Scheherazade is all about telling the story. 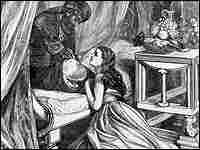 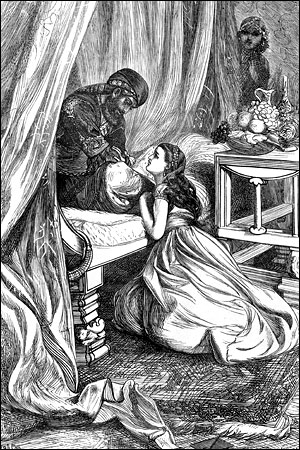 After 1001 nights of captivating storytelling, the Sultan forgives his young bride Scheherazade.

For centuries, composers have tried to spin tales in music. My understanding of how important the concept could be was cemented by Leonard Bernstein when I went to a New York Philharmonic rehearsal. Bernstein raised his hands up and asked, "Do I have to tell you the story of this Haydn symphony?"

These typically reserved musicians were practically jumping up and down, nodding their heads in anticipatory glee, like children at story time. Bernstein was the consummate story teller, often elaborating on or, dare I say, even fabricating some of the finer details for dramatic effect. But the memory was indelible for me, and the lesson was clear: It's all about the story.

As far as stories go, it's hard to top Nikolai Rimsky Korsakov's Scheherazade. It's a treasure trove—a story about one of history's greatest storytellers and the tales she weaves.

Scheherazade is the young bride of the Sultan. After one of his wives cheats on him, he decides to take a new wife every day and have her executed the next morning. But it all stops with Scheherazade. She marries the Sultan in order to save all future young women from this fate. She tells the Sultan fascinating stories, leaving him in such suspense each night that he can't execute her the next morning for fear of not hearing the end of the story. After 1,001 of these well-told tales, the Sultan relents.

Rimsky-Korsakov wrote Scheherazade (a symphonic suite) in the summer of 1888. The piece opens with the Sultan, a big and burly theme (audio) filled with gravitas and ego, almost saying "Here I am, strong and powerful. What do you have to say for yourself?"

Scheherazade responds in the voice of the solo violin (audio), weaving effortlessly up and down the instrument, like the mesmerizing sounds of a snake charmer. The harp offers three chords, sending us from consciousness to an altered state of being. Hypnosis in three easy steps.

The challenges posed in conducting Scheherazade are fascinating. I have to get the big picture across to the listeners. To do that I need to entice my solo players into interpretations that will further the overall goals of the bigger story.

The best performances are ones where the soloists understand the larger story and then add their own personal touches and insights into the mix. To have a harpist who can transform the evening with three chords or a violinist capable of weaving surprise, suspense and sensuality into the many appearances of Scheherazade, is truly magical.

Scheherazade weaves her tales seamlessly, starting with "The Sea and Sinbad's Ship." We hear the waves undulating (audio), retreating and growing in intensity. Every modulation represents an unexpected turn in the story, and I try to maximize the surprise of these twists. My goal is to reflect Scheherazade's own storytelling: to capture the imagination and leave the listener in a constant state of disequilibrium. For me, it's important not to have too many obvious arrival points, but rather to steer towards a goal and then veer away from it like the music and the story both do.

The second movement opens with Scheherazade's voice again, but each time, it's more elaborate and more ornamented. This movement is called "The Tale of the Kalender Prince," and Rimsky-Korsakov uses exotic, Middle Eastern-sounding melodic solos (audio) for the woodwind instruments. Here, I want to exaggerate the foreignness of the sounds. I ask the solo players to take more time, play as though they are improvising.

The main love story in Scheherazade is found in the third movement, called "The Young Prince and the Young Princess." The trick here for me is not to overdo the sentimentality and detract from the innocence of this beautiful story. I try to keep the sound simple yet intimate and never overwrought. That way, when the final statement (audio) arrives, complete with cymbal crash, there's room to really go over the top.

Scheherazade shows her true genius in the final movement, "The Festival at Baghdad; The Sea; Shipwreck on a Rock; Conclusion." The music begins with an impatient Sultan, his theme hurriedly coaxing Scheherazade to finish the story. He can barely contain himself by this point, in his excitement to hear what happens next. Each morning, when the executioner has arrived at his door, the Sultan has sent him away, saying "Come back tomorrow," so that Scheherazade can continue her tale.

She continues to spin her tales of wonder while gradually bringing in every theme from the previous movements, deftly tying everything together. By this time, the Sultan has forgotten to tell the executioner to return the next day. We hear his low voice at the end, finally subdued and tamed by Scheherazade (audio).