Accessibility links
In Cambodia, Preserving a Musical Tradition When the Khmer Rouge carried out the genocide of nearly 2 million Cambodians in the late 1970s, it also nearly obliterated Cambodia's arts and culture. Kong Nay, one of the last living masters of the Cambodian guitar, is trying to keep those traditions alive. 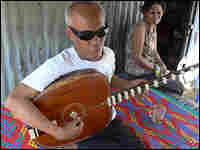 Kong Nay is one the last living masters of the traditional Cambodian guitar, known as the chapei dong veng. Matt Ozug hide caption 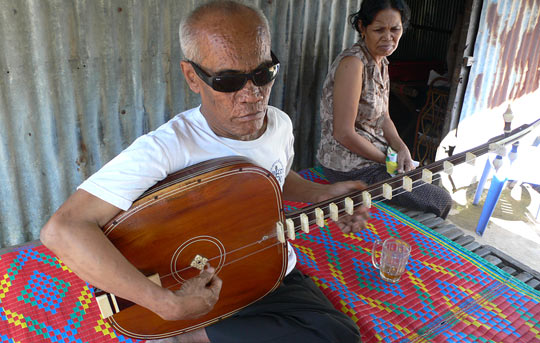 Kong Nay is one the last living masters of the traditional Cambodian guitar, known as the chapei dong veng. 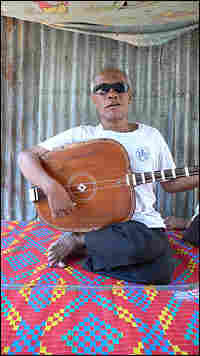 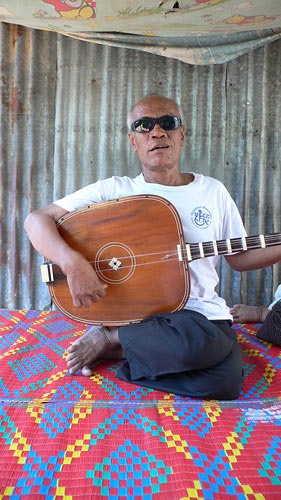 Kong was forced to play only Khmer Rouge anthems during that regime's reign.

Officials in Cambodia's capital city of Phnom Penh are preparing for the long-awaited trial of the surviving leaders of the Khmer Rouge, the regime that carried out the genocide of nearly 2 million Cambodians in the late 1970s.

In addition to destroying lives, the Khmer Rouge nearly obliterated Cambodian arts and culture. But at least one man is helping to keep those traditions alive.

Kong Nay, who is in his early 60s, is one of the last remaining masters of the Cambodian guitar, known as the chapei dong veng, to have survived the Khmer Rouge.

A childhood illness left Kong blind at the age of 4, around the time he began asking his mother to take him to hear the chapei.

He learned to play the chapei from his uncle.

"Well, it'll be difficult for me to teach you because you're blind," his uncle told him.

But Kong persisted. Whenever one of the old chapei masters was playing, Kong would beg his mother to take him to listen. And when Kong went home, he would practice humming the melodies over and over.

Chapei music is an oral tradition. The melodies are passed down from one generation to the next, while the lyrics are often composed or improvised on the spot.

When the Khmer Rouge took over his country in 1975, Kong was spared hard labor and was even allowed to keep his instrument. But he was forced to play only Khmer Rouge anthems, extolling the greatness of the regime.

Without warning, Kong's instrument was taken away. He was separated from his family and sent to work making palm rope.

Then one day, Kong was taken to the woods, and left there overnight. He still doesn't know why he wasn't killed. But the next day, when the Vietnamese army overtook the camp, Kong was freed. He was reunited with his wife, his children and his music.

When asked if he had a favorite song, or one he is proudest of, Kong plays one about liberation from the Khmer Rouge.

For 3 years we suffered unforgettable hardship; everything was destroyed.

Blood was spilled and children orphaned.
Cambodia became a place of killing.

They forced the people to dig and plow the fields.
Exhausted they fell down to the ground;
bodies swollen, tired, hopeless.

Husbands and Wives, brothers and sisters, were separated.
We were forced to forget each other.

Until January 7th, when the Cambodian people were freed of the sorrow.

Kong still performs regularly and also teaches chapei to a new generation. He hopes that one of his sons who plays the instrument can "take over from me."

"I am the oldest one now and when I pass away I hope that the music will carry on to the young generation," Kong says.

Matt Ozug traveled to Cambodia as part of the International Reporting Project.