Accessibility links
Collodi's Brooding, Subversive 'Pinocchio' A new translation of Carlo Collodi's 1881 classic Pinocchio reveals a puppet that's much darker than Walt Disney might have you believe. Critic-at-large John Powers has a review. 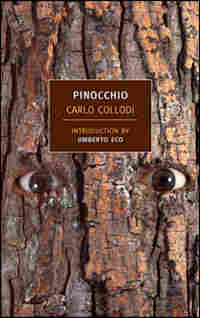 Near the end of E.L. Doctorow's novel The Book of Daniel, its alienated young hero goes to Disneyland. Walking through the park, he points out that much of Disney's work is derived from dark, subversive writers like Lewis Carroll, Mark Twain and the Brothers Grimm — but that his movies and rides erase all the darkness and subversion; Disney turns their stories into sentimental lies.

I thought about this when I picked up Geoffrey Brock's brisk new translation of Carlo Collodi's Pinocchio. Although the story of the puppet-boy is part of our modern mythology, like Peter Pan or The Wizard of Oz, I soon realized that I didn't have a clue what was in the 1881 original. Everything I knew about Pinocchio had come from the 1939 Disney cartoon that I saw as a kid and still love today.

Now, the rudiments of Collodi's tale are similar to what most of us remember from the movie. Pinocchio is a puppet, fashioned in the workshop of the craftsman Gepetto, who has adventures that turn him into a real boy. Along the way, he gets suckered by a scheming fox and cat, goes to a seductive toy land where boys are turned into donkeys and gets swallowed by an enormous fish. When Pinocchio lies, his nose grows.

Yet for all these familiar things, Collodi's book is, from the beginning, a very different — and much wilder — experience. Gepetto isn't a kindly old man — he's hot-tempered and grindingly poor. There is a talking cricket, but it's not named Jiminy, doesn't wear a top hat, and gets squished by Pinocchio 12 pages in when it tries to give him advice. This lack of sentimentality runs through the book, whose sense of reality reflects the harshness of life in Collodi's Tuscany. This is a place driven by hunger, brutality, greed and social injustice.

Which isn't to say that the book is depressing. In fact, it's filled with wonderful surreal touches, many involving animals, like the huge snail that offers to let Pinocchio into his house then takes nine hours to reach the front door. A similar anarchic spirit infuses Pinocchio himself, who's not the cute, anodyne figure we remember from the movie. He's a selfish, unruly, sometimes cruel puppet — the very soul of childhood.

Which was one reason Disney had so much trouble turning Pinocchio into a movie. "People know the story," Uncle Walt said, "but they don't like the character." And so his team set about making Pinocchio likable — drawing him less as a wooden puppet than as a jerky little boy and giving him an intrinsic innocence. He never willingly does bad things, he's just led astray.

Of course, one could say that Disney himself took the easy road in making Pinocchio. Rather than preserving Collodi's tough-minded picaresque, he deliberately gave the story a reassuring shape, from the cozy seductiveness of Gepetto's workshop to Jiminy Cricket crooning, "When You Wish Upon a Star." And it clearly worked: Disney's wish-fulfilling Pinocchio eclipsed the original far more than did his forgettable versions of Peter Pan, Alice in Wonderland and Huckleberry Finn.

This is partly because it's a far better movie — one of Disney's greatest — and partly because the film actually surpasses the book in two bravura sequences — that nightmarish scene on Pleasure Island where the boys turn into donkeys and the scary escape from Monstro the Whale. Yet the big reason Disney's Pinocchio could colonize Collodi's is that, for all its wish-fulfillment, it hasn't wholly lost the original's primal sense of pain and danger. Money-loving puppet masters, boys sold into slavery, the haunting image of Pinocchio lying face down in water, seemingly dead. All that is in the Disney version, which is one reason why when it was first released, audiences didn't cotton to it as they now do. The movie was too dark for a country faced with the Depression and World War II.

It's hard to imagine anyone feeling that way today. We're all more accustomed to images of violence and cruelty, although I'm not sure that the last 70 years have made us stop wanting to wish upon a star. We're still more comfortable with Disney than Collodi. Even now, the audience would shriek with outrage if they saw Pinocchio flatten Jiminy Cricket with a wooden mallet.

How it happened that Master Cherry, a carpenter, found a piece of wood that cried and laughed like a little boy.

"A king!" my little readers will say at once.

No, children, you're wrong. Once upon a time there was a piece of wood.

It wasn't a fancy piece of wood, just a regular woodpile log, the kind you might put in your stove or fireplace to stoke a fire and heat your room.

I don't know how it happened, but the fact is that one fine day this piece of wood turned up in the workshop of an old carpenter, Master Antonio by name, though everyone called him Master Cherry, on account of the tip of his nose, which was always shiny and purple, like a ripe cherry.

As soon as Master Cherry saw that piece of wood, he cheered right up. He rubbed his hands together with satisfaction and mumbled in a soft voice, "This log has turned up at a good moment. I think I'll use it to make me a table leg."

Wasting no time, he picked up his sharp hatchet to start removing the log's bark and trimming it down, but just as he was about to strike the first blow, his arm froze in midair, because he heard a little high-pitched voice pleading, "Don't hit me too hard!"

"I see," he said then, laughing and scratching his wig. "Clearly I must have imagined that little voice myself. Now let's get back to work."

And picking the hatchet back up, he dealt the piece of wood a heavy blow.

"Ouch! You hurt me!" cried the same little voice, bitterly.

This time Master Cherry was struck dumb: his eyes bugged out of his head in fright, his mouth gaped, his tongue dangled down to his chin, like those grotesque faces carved on fountains. When he regained the use of speech, he said, trembling and stammering with fear, "That little voice that said ouch, where could it have come from? Because there's not a living soul in this place. Could this piece of wood have somehow learned to cry and complain like a little boy? I can't believe that. Look at this log — it's a piece of firewood, like any other. If I threw it on the fire I could bring a pot of beans to a boil. So what's going on? Could someone be hidden inside it? If anyone's hiding in there, tough luck for him. I'll show him what's what!"

And as he spoke he grabbed that poor piece of wood with both hands and began whacking it mercilessly against the walls of the room.

"I see," he said then, forcing a laugh and ruffling his wig. "Clearly I must have imagined it myself, that little voice that said ouch. Now let's get back to work."

And because by this point he was really quite afraid, he began humming to himself to screw up his courage.

Meanwhile, leaving the hatchet aside, he picked up his plane, intending to scrape that piece of wood and make it smooth, but as he was planing back and forth, he heard the same little voice, which laughed and said, "Stop it! You're tickling by tummy!"

This time poor Master Cherry fell down as if struck by lightning. When he opened his eyes again, he found himself sitting on the floor.

His face seemed misshapen, and even the tip of his noise, which was nearly always purple, had turned bright blue with fright.