Accessibility links
States Ban Catfish Imports From China Over Tests Catfish imports from China are causing economic and health concerns in the South. Tests on some frozen catfish fillets from China have found two antibiotics banned by the Food and Drug Administration. Aside from any threat to health, the imports have also been a threat to the economy of the Mississippi Delta. 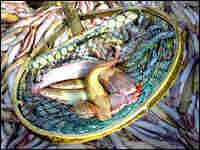 In a file photo, a Chinese farmer shows off his harvest of catfish, which he bred in his farm. STR/AFP/Getty Images hide caption

Catfish imports from China are causing economic and health concerns in the South. Tests on some frozen catfish fillets from China have found two antibiotics banned by the Food and Drug Administration.

Alabama has banned catfish from China, after it determined that the fillets contained the antibiotics. Mississippi has halted store sales of the imported fish; Louisiana and Arkansas plan to test all catfish imported from China.

Aside from any threat to health, the imports have also been a threat to the economy of the Mississippi Delta, which provides more than three-fourths of the catfish eaten in the United States.

The U.S. catfish business was booming until about eight years ago, when a wave of cheap imports from Asia pushed prices down and started putting American catfish farmers out of business.

On the western edge of Mississippi, large rectangular ponds are laid out like football fields, as farmers raise fish where their forebears once grew vegetables. But it is now common to see drained catfish ponds, as farmers exit the business.

Catfish farmer Paul Dees says he and other farmers have for years been telling officials that Asian catfish ponds were filthy and pumped full of antibiotics. But, he says, it took the recent Chinese melamine scare to get the government's attention.

"I believe if you go cheap you get cheap," Dees said.

Roger Barlow is vice president of the trade group Catfish Farmers of America. He says once states finally started testing imported catfish themselves, they found the domestic farmers were right.

Repeated tests by Mississippi and Alabama show the presence of fluoroquinolone antibiotics, which the FDA has banned for use, saying they lead to the emergence of antibiotic-resistant bacteria.

Spell says that it is the Food and Drug Administration's responsibility to police the food coming into the United States — and he thinks the agency isn't doing enough.

Last year, Spell says, the FDA blocked 49 shipments of Chinese catfish. And 10 were blocked this past January.

"Well, we know the FDA only checks a little over 1 percent of the food," Spell says. "So if you're finding that type of volume, there's a tremendous problem out there. That's just the tip of the iceberg."

Spell says that while the FDA lacks the staff and resources to check more of the food coming into the United States the onus should be put on the foreign producers.

The FDA has yet to take any sweeping action against the Chinese catfish; the agency is conducting its own tests.