Accessibility links
A Drying Amazon Could Speed Climate Change A drought in 2005 turned one of the world's largest carbon absorbers into a carbon emitter. Global warming trends predict the Amazon rainforest will continue to dry, potentially ending its ability to suck more CO2 from the atmosphere than it absorbs. 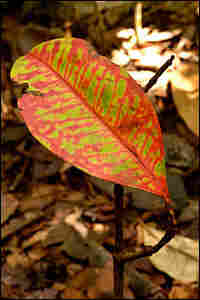 A leaf from a young sapling begins to dry during a November 2005 drought in in the Amazon region of southern Colombia. Peter Vitzthum hide caption 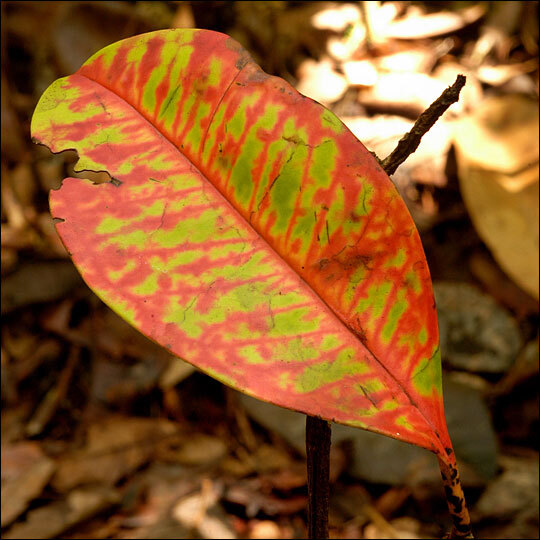 A leaf from a young sapling begins to dry during a November 2005 drought in in the Amazon region of southern Colombia. 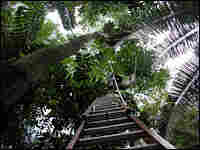 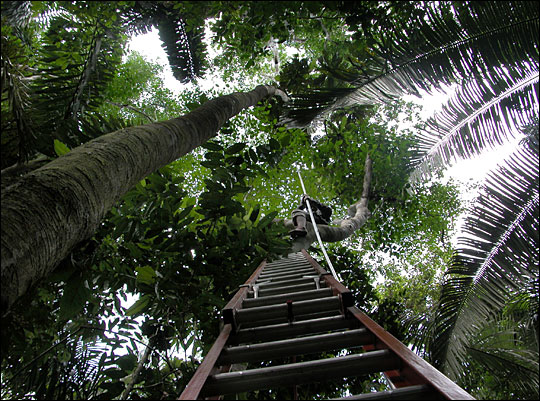 To identify the trees, Phillips and his team collect botanical samples in Tambopata, Peru. Some plots have more than 200 tree species. 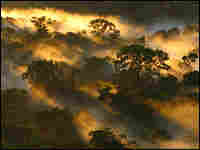 The misty Amazon forest canopy at dawn. In 2005, the forest became a source of about 1 billion tons of carbon. Peter van der Steen hide caption 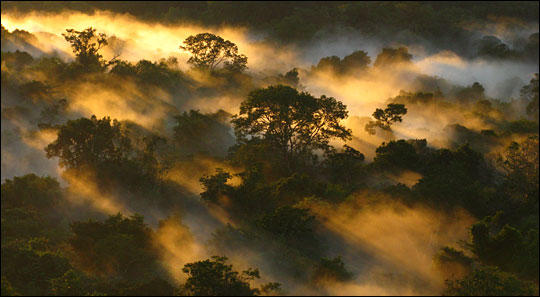 Misty Amazon forest canopy at dawn. In 2005, the firest became a source of about one billion tons of carbon.

That worries scientists, who say that the Amazon's role as a "carbon sink" that sucks global-warming carbon dioxide out of the atmosphere may be compromised.

The Amazon is the largest rainforest in the world and consumes about one-fifth of the carbon dioxide produced from burning fossil fuels.

Ecologist Oliver Phillips of England's University of Leeds was part of an international team that studied 30 years of data on the Amazon and compared that with what happened to the rainforest during the 2005 drought there. The team found that the forest emitted far more carbon during the drought "primarily because the trees died faster than before," says Phillips.

At the same time, it absorbed less carbon dioxide because plant growth had slowed down. "So instead of being a sink of about 400 to 500 million tons, the system became a source of somewhere close to a billion tons in that year," he says.

Co-author Dan Nepstad, a forest ecologist from the Moore Foundation in San Francisco, suggests that it may be climate warming that's causing the Amazon to dry up. He says some climatologists think "the warming of the northern tropical Atlantic of 2005 may have been more intense because of global warming." And that warming is believed to have shifted hotter, drier air over the Amazon.

Nepstad says as the climate warms, the Amazon could be caught in a feedback loop, whereby warmer Atlantic waters continue to dry out the Amazon, which in turn contributes more carbon to the atmosphere and accelerates warming.

Phillips is cautious about predicting whether the slip from carbon sink to source will become more frequent. But he notes that computer models of how climate may change in the future do predict a drying of the Amazon and says this latest research confirms those models, at least for one year.

The findings are published in this week's issue of the journal Science.