Accessibility links
Frightened Rabbit: Breakup Songs That Rock : World Cafe After cultivating a strong local following, the Scottish band has burst into the indie scene with The Midnight Organ Fight. The album is packed with brash, emotional and heartbreaking songs that push until they explode in a cathartic wave of relief. They're painfully catchy and reflective at the same time. 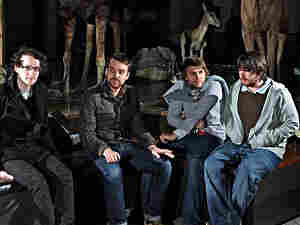 Slowly stepping into the public light after years of honing their work, Scottish indie-rock band Frightened Rabbit is collecting their dues on the world stage. After cultivating a strong local following with catchy melodies and an emotive style, they are now distributing their work more widely, much to the delight of their rapidly growing fan base.

Led by brothers Scott and Grant Hutchison, the band has continued to grow in personnel and evolve in style. Their latest studio LP, The Midnight Organ Fight, is exploratory both in sound and subject. Scott Hutchison wavers between soft crooning and brash lamentation, through powerful lyrics steeped in honest heartbreak. He's mastered songs that intrigue, with driving melodies that teeter on the brink, until they explode in cathartic showers of energetic guitar hooks. Hutchinson effortlessly churns out refrains that stick in your mind and hold fast.

In this session with host David Dye, the band discusses the breakup that inspired these songs and the challenge of relating their music to an American audience.