Accessibility links
Iraq's Marshlands Face A Second Death By Drought Iraq's southern marshlands were once as famous as the Florida Everglades; they supported a vibrant culture based on fishing, water-buffalo herding and reed gathering. The Marsh Arabs were on their way to restoring their old lives, but now a drought and government inaction are threatening the marshes. 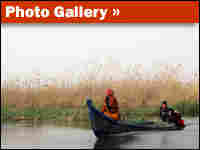 In Iraq, drought is threatening one of the country's natural wonders, the vast southern marshland between the Tigris and Euphrates rivers.

After the 1991 Gulf War, former Iraq President Saddam Hussein drained the wetlands so that his troops could hunt down Shiite rebels who were hiding there.

Projects to revive the marshes were launched after the U.S.-led invasion in 2003, with the aim of restoring a vibrant culture that's based on fishing, reed gathering and tending water buffalo.

Local people say all that could now be lost.

The natural slope of the land near the confluence of the country's two great rivers allowed water from the Tigris to flow across a vast plain of reeds, like the Florida Everglades, to emerge into the Euphrates. For centuries, it supported a unique Arab culture — people who lived in reed houses on islands in the marsh.

A trip to the central marshes starts in the town of Chubayish, on the Euphrates River. Jassim al-Asadi shows visitors the earthen dikes that still line both banks of the river. The dikes were built in the early '90s, on orders from Saddam, as part of a scheme to destroy the marshes and punish the people he accused of providing shelter to Shiite rebels.

His plan succeeded. One of the world's great wetlands was reduced to a dusty plain.

Local people say the population around Chubayish dropped from more than 50,000 to fewer than 8,000. People migrated to other parts of Iraq in search of work.

Asadi grew up in Chubayish and he was here when, just after the fall of Saddam's regime, the marsh people took shovels and broke Saddam's embankment, letting the water of the river rush out onto the plain. Reeds that had lain dormant under the dust grew again, and fish from the Euphrates moved back into the waterways. Birds that migrated from as far as Russia used the marsh as a stopping place.

Asadi is now the local director of an environmental group called Nature Iraq. Most of the group's funding comes from Italy's Environment Ministry, which had troops in the area early in the U.S.-led occupation. Nature Iraq promotes projects designed to make the marshes' revival sustainable, including plans for a fish hatchery, tourist development and environmentally conscious "Green Villages," where marsh people can practice their traditional culture while enjoying access to modern education and health care.

Asadi says that as the marsh revived, many people returned, swelling the population to around 36,000.

Asadi's boat glides through the gap in the dike that brought the first water back into the marshes.

Once inside, the steely gray of the river changes to a rich gold, as the boat threads into a channel walled with reeds. Even in Iraq's winter, new green growth is already forcing its way up among the dry stalks. Wading birds dart at the base of the reeds. Black-and-white kingfishers watch from the windblown plumes at the top. Water buffalo swim neck-deep in the channel.

For a short while, it's possible to see why some traditions say this was the biblical Garden of Eden.

Archaeologists know for certain that this region was the cradle of civilizations dating back for millennia. Abdul Amir al-Hamdani is the head of the national archaeological office in the nearby city of Nasiriyah. He's in the marshes to survey ancient sites that have emerged as the land dries out.

Hamdani says he's noticed a strong similarity between the Marsh Arab culture and that of Sumerians living in the region's marshes in the third millennium B.C. Opening his laptop, he points out Sumerian art work that shows people living in arched reed houses and poling boats that look almost exactly like those of the Marsh Arabs.

The channel widens into a broad sheet of open water, Baghdadiyah Lake. Asadi says local people still come here to fish and hunt migratory birds. In the old days, he says, boys and girls came here in their boats to sing and flirt.

Though the lake seems to stretch as wide as the horizon, Asadi points to a disturbing fact: The water in most places is less than a foot deep; it should be 4 feet or more. This stretch of the marsh is the healthiest part of a very sick system. A drought is killing the marshes almost as effectively as Saddam did.

In the channel, two fishermen pole their boat close to the reeds. They're using a portable generator with electrodes trailing in the water to shock the fish. The practice is illegal, because it kills fish of all sizes, but the law is not enforced. Some of the fish in their boat are no bigger than a silver dollar. The biggest is no longer than a man's hand.

When Asadi asks why the men aren't fishing legally, one man shrugs.

"There's no water now. You see that land?" he says, pointing to the bank. "That land used to be covered by a meter of water. Before, we never had to fish this way."

The desperate need for water is a story repeated by nearly everyone who depends on the marshes. At the water's edge, women unload bundles of green reeds they've brought to sell as cattle feed. Rabab Nadwan Hudeid, 44, works among her daughters and nieces. The girls wear long, bright-patterned dresses, but they are veiled to the eyes. Hudeid's face is uncovered, tanned to a leathery brown, and her expression is woeful.

"I'm responsible for 10 people, all women and girls," she says. "Our only man is old and blind. This is how we live. If we go out, we can get enough money to eat. If not, we'll die of hunger. Without water to grow the reeds, what will we do?"

A chill wind sweeps down from the north, laden with dust that is a reminder of the drought in the rest of Iraq. The wind whirls dust devils around a cluster of houses that sits on a brown plain near the river. People here raise water buffalo, a plentiful source of meat and milk that's prized in other parts of Iraq.

Ala'a Adbul Muhsin Abdullah says all his family's income comes from his animals, and he fears he'll lose them to the drought.

"The water has all dried up here. We have no reeds to feed our animals," he says.

Abdullah says that as the water level drops, what remains becomes brackish and dirty, creating an opportunity for cattle diseases to spread. Last year, he says, many died. A healthy adult water buffalo is worth as much as $1,500, and the loss of one is a calamity for families that live near the subsistence level.

Sheik Abul Abbas has spent most of his 73 years in Chubayish. He's a lean man who still has a peppering of black in the white stubble on his chin. Dressed in the traditional sheik's headscarf and robe, he receives visitors at the house where he now acts as a tribal judge, resolving disputes among the marsh people.

The sheik didn't leave, even after Saddam drained the marshes.

In his younger days, Abbas was a prosperous fish buyer.

"During the season in June or July, I used to ship 10 truckloads of fish a day to neighboring towns," he says. If the marshes were fully revived, he says they could supply fish for the entire country.

Like many people in the marshland, the sheik says there's a relatively easy short-term fix that could restore some water to the marshes.

"There's already a dike downriver from here. If the government dams the river at that point, it would back water up into the marshes — not as much as we'd like, but enough to keep parts of the marshes alive," Abbas says.

The sheik says the provincial council has written to the Ministry of Water Resources, asking that the dam be built.

Back in Baghdad, the water minister, Abdul Latif Rashid, says he's aware of the request.

"Our technical people are studying all the problems of the marshes," he says, adding that solutions are often more complicated than people think. "Not always when we get letters and requests from farmers or civil servants, that means [the suggestions] are technically viable or technically achievable, but we are looking at it."

The minister says the problem is partly natural — caused by the drought — and partly political. He says Turkey and Syria are diverting too much water from the Tigris and Euphrates for their own agriculture, and the Iraqi government is now trying to negotiate a fairer allocation of the resource.

Many people in the marshes say that if something doesn't happen soon, their livelihoods will dry up, and they'll be forced to leave their homes again — this time, for good.