Accessibility links
What's Behind The Snore? Sagging, Floppy Tissue The older you get, the more likely you are to snore. One reason is that as we age, the tissue in the roof of the mouth starts to sag. There are other reasons behind snoring — like a big uvula and fat pads in the throat. But the good news is, there are lots of remedies to silence your snore. 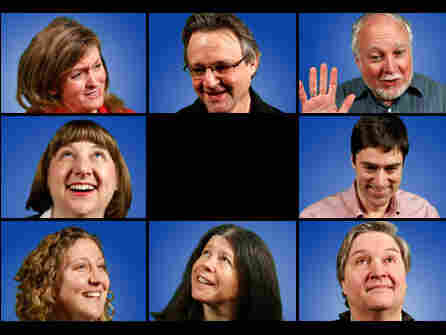 Ever wondered if Richard Knox and Joe Palca snore? Or what their snores would sound like?

If you're kept awake at night by someone who snores, you're not alone. And, snoring becomes more common as we age — by age 60, more than half of adults snore.

The log-sawing vibrations are often the result of air trying to move through narrowed or floppy, soft passages in the mouth, throat and nose. Other times, the air is obstructed by anatomical abnormalities, such as over-sized tonsils or uvula — that boxing-bag like thing that hangs in the back of the throat.

"I hear these stories every day," says Sonya Malekzadeh, an ear, nose and throat doctor at Georgetown University Hospital in Washington, D.C. Lots of patients come into her office at the urging of their partners. They report being "kicked out" of their bedrooms for their loud snoring.

Many men don't even realize they're doing it, Malekzadeh says. And, yes, men are twice as likely as women to snore.

"The reason men are affected more than women is likely due to fat distribution. When men gain weight, it is usually in the neck, upper torso and abdomen," she says. "On the other hand, women usually gain weight in the hips and thighs."

Fat in the neck area can constrict airway passages and lead to increased snoring. And, as we age, the soft tissue inside the mouth and palate can sag, just as wrinkles develop with aging skin.

Web Chat: Why We Snore And How To Stop It

You know who you are. Or maybe you sleep next to one. About 20 percent of adults snore. The good news is that there are lots of ways to silence that roar.

Drs. Sonya Malekzadeh and Judith Owens answer your questions in a Web chat.

Experts recommend starting by adjusting your body position: Try to sleep on your side. Many people snore only when they're on their backs.

Also, elevating the head with an extra pillow "may help prevent collapsing in the back of the throat," says Malekzadeh.

Alcohol and sedatives can relax the palate of your mouth and decrease the opening in the throat, which leads to snoring.

"I tell people to avoid alcohol for the three to four hours before going to bed," says Malekzadeh.

Dental appliances are designed to pull the tongue forward to prevent constriction in the back of the mouth. But many people spit them out, says Malekzadeh, and it's not an effective option if you can't keep it in your mouth. Custom-fitted dental appliances, crafted by a dentist or oral surgeon, can be effective for some snorers.

If you have trouble breathing through your nose, over-the-counter decongestants or breathing strips that adhere to your nose could help, says Stacey Ishman, an ENT doctor and the director of the Center for Snoring and Sleep Surgery at Johns Hopkins School of Medicine in Baltimore.

"There can be a narrowing or a collapse in your nose, and [breathing strips] can keep that area open," says Ishman.

About 25 percent of patients with a stuffy nose can decrease snoring significantly by using the strips, she says. Or, sometimes saline spray can help increase air flow in the nose, Ishman says. In more severe cases, steroids can be prescribed. 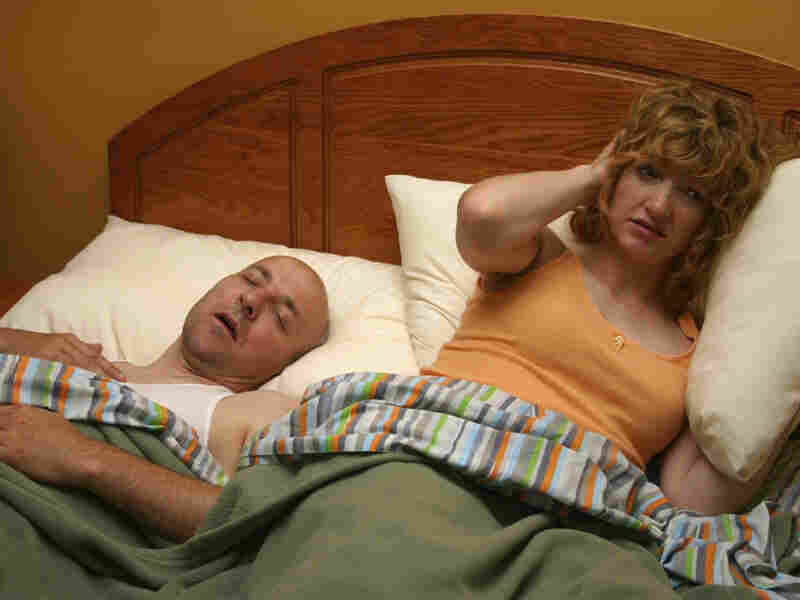 Many snorers seek medical attention only at the prodding of their partners. iStockphoto.com hide caption 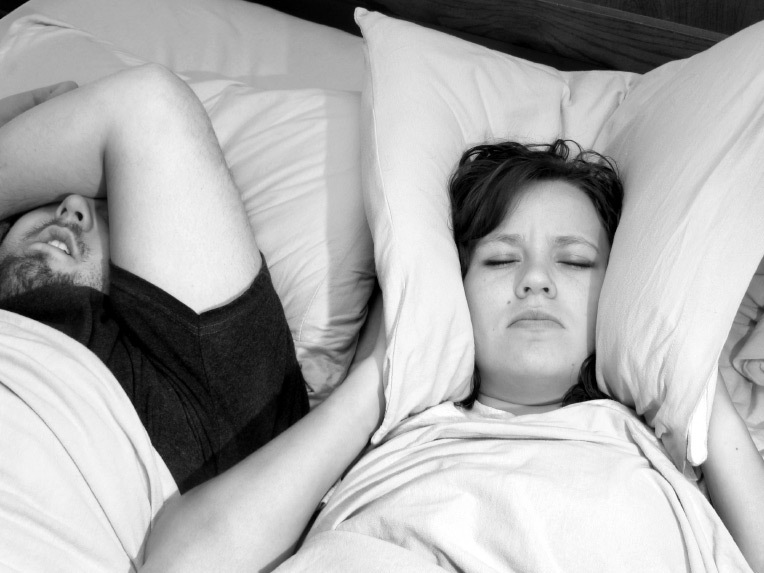 Many snorers seek medical attention only at the prodding of their partners.

Sometimes, snoring can be a sign of sleep apnea, a potentially serious disorder in which breathing repeatedly stops and starts. Sleep apnea is more common in overweight people, though normal weight people can also develop it.

For someone who is already prone to sleep apnea, weight gain can increase the risk, says Ishman. Fat "pads" can constrict the airway and lead to snoring, or in cases of sleep apnea, a complete collapse of the airway.

Additionally, researchers are looking into how snoring may increase the risk of memory issues, mood disorders and learning problems — in part because snoring can interrupt rest.

A few studies have also found an association between snoring and higher rates of cardio-vascular risk factors including high-blood pressure.

It's impossible to say what amount of snoring, and over what period of time, is dangerous, says Ishman. "But we feel comfortable saying that if you can do something to treat the snoring we think it's going to reduce your risk factors."

When Is Surgery Recommended?

Experts say there are many factors to consider. But, generally speaking, doctors recommend surgery when anatomical problems are causing excessive snoring.

ENTs also perform surgeries on people who have over-sized "turbinates," or shelves on the inside the nose.

"These shelves help warm and clean the air" says Malekzadeh, "but if they're big or become enlarged they can crowd the nasal cavity."

The surgery shaves the bone in the nose down to a normal size. After the surgery, the reduced turbinate ridges open up space so air can move through unobstructed.

The Mouth And Throat

An adult tonsillectomy, the removal of the tonsils, is a common treatment for sleep apnea. It entails about a two-week recovery period.

But a tonsillectomy is almost never performed to alleviate snoring in the absence of sleep apnea, says Malekzadeh.

When sleep apnea isn't the cause, snoring is often considered a "cosmetic" problem and most treatments are not covered by insurance companies.