Accessibility links
Bar Owners Learn How To Lure Drinkers While Americans are still drinking in a tight economy, they're doing more of it at home. At a convention in Las Vegas, bar owners are learning new ways to bring in customers, such as social networking and karaoke — and even mechanical bulls and polar plunges.

At a convention in Las Vegas this week, bar owners are learning how to attract ways to bring in more customers to drink beer, including social networking, karaoke and even buying mechanical bulls. iStockphoto.com hide caption 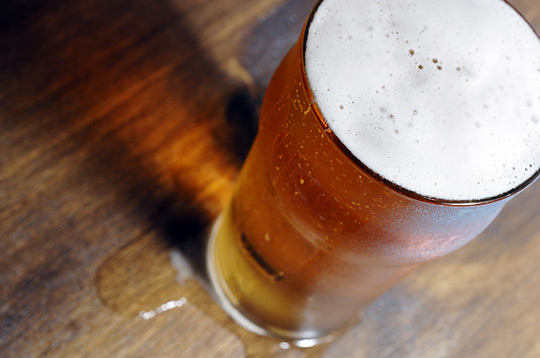 At a convention in Las Vegas this week, bar owners are learning how to attract ways to bring in more customers to drink beer, including social networking, karaoke and even buying mechanical bulls.

Thousands of the nation's bar and nightclub owners are in Las Vegas this week for their annual convention. There are all kinds of sessions, but if there's a theme running through this year's show, it's "how to prosper in hard times" or "driving beverage profits in a new economy."

Homespun wisdom and alcohol are in ample supply in the cavernous Las Vegas Convention Center.

Farah is on the hunt for some cheap laser lighting (if there is such a thing), and he pauses long enough to give a snapshot comparison of what tough means to him.

"Oh I would say that business is down 10 to 20 percent," Farah says. "People do not pay what they used to pay. So you have to reduce your prices for drink prices, adjust to the market. So we give them more for their money."

But it's not like the hard times are universal.

"We're up about 15 percent over last year," says Del Valenti, who owns a tavern called Albert's on the Alley in Garden City, Mich. "Yeah, our business is fine, and we're very economically priced, and people can afford to come in, and they do."

More Americans Are Drinking At Home

So do people consume more alcohol in times of economic hardship, or more in times of prosperity? Per capita alcohol consumption in the U.S. stays pretty flat. Whether it's in beer, wine or distilled liquor, Americans drink 2.5 gallons of alcohol a year on average, and that hasn't changed for the past few decades.

"When the economy's great, people drink. When the economy sucks, people drink," says Donna Hood Crecca, the editorial director of nightclub.com, the trade show's publication. "This is America. People drank during Prohibition. You know? They're gonna drink."

But Americans are drinking less out on the town these days. Sales of alcohol in bars and restaurants were down a bit last year, but liquor store sales were slightly up. So, Americans are still drinking; they're just doing more of it at home. And that, Crecca says, is a challenge to bar and nightclub owners.

"There is more competition and there's less expendable income," Crecca says. "So how do you get someone to come spend it with you as opposed to somebody else?"

And then there's the vagaries of the hipster set.

"It's fad driven — you know the customer is fickle," Crecca says. "The 20-something crowd is really fickle. You know they're gonna go with what's hot this week, and it may not be hot next week. And you have to figure out if you run one of those places, how do you keep them coming back, and that's not easy."

And in the midst of the flicker and smoke, there's Robin Whincup, offering that old standby — the mechanical bull.

"You can't sell something like the mechanical bull, unless you can see it, ride it, touch it and smell it," Whincup says.

It smells like a mechanical bull should, though there is no doubt that the new mechanical bull smell would get a little stale once it has been ridden by hordes of drunken bar patrons. Still, Whincup assures that the bull is a mob magnet.

"It's just a great attraction. It brings the crowds in; it's very visual. People love it. It's very American," he says.

But so far, at least some of those in attendance haven't had to do much to attract clientele. Tom Seltzer, who owns three bars in central Wisconsin, says the economic downturn has actually helped business.

"I've got a lot of guys in my area that are laid off from work and it actually helps me," Seltzer. "Seems like they have nowhere else to go, so they actually hang out a lot more and drink a lot more. [There's] nothing else to do in Wisconsin but drink."

Seltzer says if business does drop off, he might put on a polar plunge, where customers jump into the icy waters of a nearby Wisconsin river and he serves drinks. Apparently, another bar owner tried that recently, and it made a big splash.