Accessibility links
San Francisco Mayor Newsom Takes Gay Marriage Fight To Court San Francisco Mayor Gavin Newsom says he knows the majority of Californians don't agree with him, but he says gay marriage is a fundamental right. It's a politically tricky move for Newsom, who is preparing to run for governor in 2010. 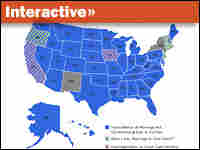 Californians passed Proposition 8 last November. But San Francisco's Mayor Gavin Newsom says he is hoping to make a legal end run around the law with this new court fight. In an interview with NPR's Steve Inskeep, Newsom said he feels he has to fight for his constituents' rights.

"If in this country a simple majority of people can start stripping away the rights of a protected class in the minority, that's a pretty alarming thing," Newsom said. "So I think it's right what we're doing."

Proposition 8 marked the second time that California voters have approved a ban on gay marriage. In May 2008, the state's highest court overturned a 2000 ban and the state began issuing marriage licenses to same-sex couples. The passage of Proposition 8 put a halt to those marriages.

Many people who oppose same-sex marriage and supported Proposition 8 thought the issue was over last year when voters sided with them in a slim majority. The win meant the state would amend its constitution to prohibit same-sex marriage. But that did little to deter Newsom, who famously gave out marriage licenses in San Francisco when they weren't legal and officiated at the first lesbian wedding during the brief window when such unions were legal last year.

For Newsom, A Question Of Civil Rights

"Prop 8 did something that no other state in the history of this country has done," Newsom said. "It took away the rights of people that already were legally affirmed. Imagine someone putting something on the ballot saying your wedding, your marriage is no longer valid."

Newsom said the ban affects more than 18,000 same-sex couples who got married between June and November 2008. It is not clear whether those marriages are still valid.

Newsom said he understands many people are uncomfortable with gay marriage. Even some of his relatives oppose it. But he likens the battle to the fight for equality for African-Americans. He dismisses the idea that gay couples could be granted rights equal to marriage under the rubric of something other than marriage, such as a civil union.

"Separate inherently is not equal," he said. "There's a reason why $45 million was spent against marriage equality. It's because people understand the word does have meaning. And equality comes when we accept the same notions and the same institutions for everyone, regardless of race and gender and regardless of sex orientation."

Newsom says he believes the ban passed because the opposition was simply outcampaigned.

"We ran a lousy campaign," he said. "I'll be candid about that. I don't think we communicated effectively. The other side was united, focused, spent huge amounts of money. They talked about their rights being tramped by activist judges, talked about the fact that we were going to start teaching in textbooks to young kids about the fairy princesses being able to marry other fairy princesses. This was effective. It scared people."

The issue of gay marriage can be tricky for Newsom, who has taken the first steps toward running for governor in 2010. In many ways, he has become the face of the movement to make same-sex marriage legal. He is spending city money on the legal fight, and his vocal support has made it into numerous television ads on the issue. But Newsom says he'll fight on, even if it hurts his chances in the gubernatorial race.

"I'm not going to let my political future get in the way of this," he said. "People don't have to agree with me. They can say, 'My gosh, I can't believe I'm listening to this guy. I can't disagree with him more.' But at least they know that I'm going to fight for things that I believe in. And I don't need to be in formal office to do that."