Accessibility links
Terri Lyne Carrington: Embracing Her 'Real Life Story' She was a child prodigy on the jazz stage. Her debut album received a Grammy nomination. She was the house drummer on late night TV shows. Now, the in-demand musician, composer, producer and professor Terri Lyne Carrington leads her group with a set of stunning original works and inspired covers, from the Kennedy Center Jazz Club in Washington D.C. 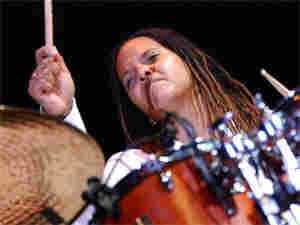 Terri Lyne Carrington plays with equal parts power and passion. She's deeply rooted in the classic jazz tradition, yet experiments with new sounds and rhythms that give her music a contemporary edge. And she travels with the best. Already in 2009, Dee Dee and Carrington made a U.S. State Department Tour of India, commemorating the 50th anniversary of the historic visit to that country by Dr. Martin Luther King Jr. and Coretta Scott King.

The depth of Carrington's compositions and the wide scope of the music were stunning, and Real Life Story earned her a Grammy nomination. Soon Carrington found herself one of the most sought-after drummers in jazz: You may remember seeing her on TV as the house drummer on The Arsenio Hall Show, and the late-night show Vibe, hosted by Sinbad.

Besides composing and performing, Carrington is a Professor of Percussion at her alma mater, Berklee College of Music in Boston. She's set to release an update of her debut album, entitled More to Say: Real Life Story, Next Gen, embracing her grown self and her love of jazz and groove, living on the edge and in the middle, with an open mind and heart. And she sings! Our set includes Carrington's vocal interpretation of "Ethiopia," a gorgeous song by Joni Mitchell.

Her guitarist Tim Miller is an Associate Professor at Berklee. Saxophonist Gary Thomas worked in Miles Davis' band, and now directs Jazz Studies at the Peabody Institute in Baltimore. Recent Berklee graduate Lawrence Fields, on piano, is working with another top-tier drummer, Jeff Tain Watts. And Hogyu Hwang from Seoul, Korea — well, you're just going to have to listen for his beautiful bass, with which the Terri Lyne Carrington Group introduces "Michelle."