Accessibility links
Once-Proud Hummer May Be On The Way Out As General Motors looks for someone to take the Hummer off its hands, the vehicle's final days may be at hand. The car embraced by some and reviled by others holds an odd iconic status in the public's imagination. 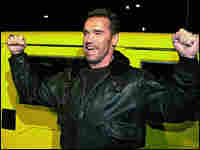 Three years before he became governor of California in 2003, actor Arnold Schwarzenegger posed near his yellow Hummer as he arrived at the premiere of his film The 6th Day. Since then, he has adapted one of his Hummers to run on hydrogen and another to run on biofuels. Lucy Nicholson/AFP/Getty Images hide caption 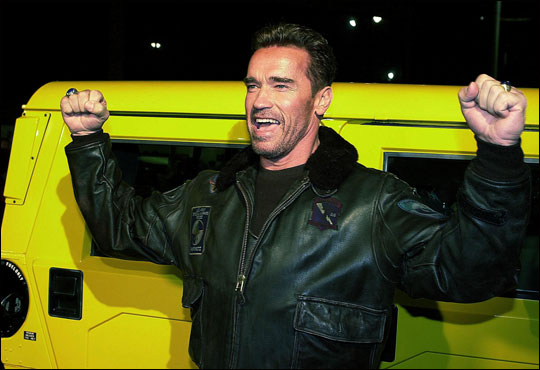 Three years before he became governor of California in 2003, actor Arnold Schwarzenegger posed near his yellow Hummer as he arrived at the premiere of his film The 6th Day. Since then, he has adapted one of his Hummers to run on hydrogen and another to run on biofuels. 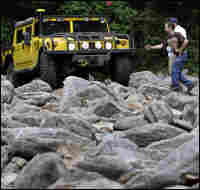 Two members of the Hummer Club try to spot a good path to drive their H1 Hummer over a rocky trail at the Rausch Creek Off-Road Park in Tremont, Pa., last June. Carolyn Kaster hide caption 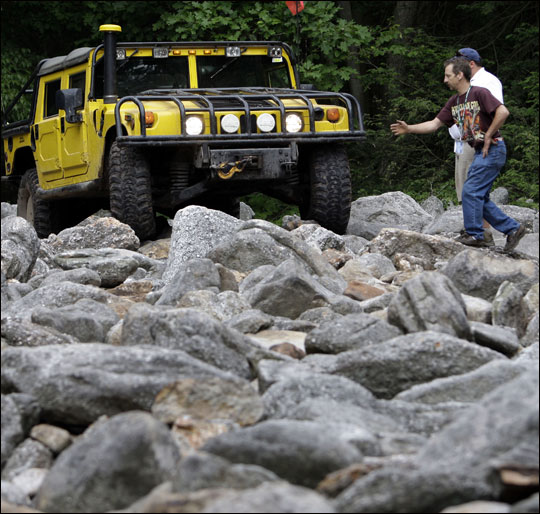 Two members of the Hummer Club try to spot a good path to drive their H1 Hummer over a rocky trail at the Rausch Creek Off-Road Park in Tremont, Pa., last June.

Cash-strapped General Motors is trying to raise money by putting its Hummer division up for sale. If GM can't seal a deal by the end of March, the production of the iconic American vehicles could be in its final days.

The company will announce the Hummer's fate by March 31, the same day the automaker must present its final viability plan to the Treasury Department. GM says it's in serious talks with several interested parties to take over the brand.

Either way, the Hummer has been both loved and loathed since the commercial version of the military Humvee took to the American road in 1992.

For Love — Or Hate — Of The Hummer

For some people, it was love at first sight. By the time GM bought the brand rights in 1999, there were lots of Hummer fan clubs. Hummer dealers held obstacle course events called "Hummer Happenings." The truck inspired devotion like few other vehicles.

Brad Berman, the editor of hybridcars.com, concedes that the truck was an unqualified success — even though he's not a fan.

"It's so iconic, it's so big, it's so in your face, it's so military-looking and rough, that it can't help but stir emotions," Berman says.

But the Hummer also stirred hate. There are insulting bumper stickers to put on your economy-size car. Or you can join one of the many Hummer-bashing Internet groups. One urges people to use an ancient hand signal they call the "Hummer salute" whenever a truck is sighted.

"All the advertising was Hummers bashing over the terrain and 'in your face' and 'make no apologies,' " Holman says.

Off-Roading With The Hummer

But owning a Hummer isn't just about making a statement. For many, it's simply about what the truck can do. It's popular among ranchers, and people who hunt and fish. Carl Zipfel, the head of Hummer Design at GM, says many owners just want a vehicle that can pull their boat or get them to work when the streets haven't been cleared of snow.

"They don't feel like they need to make excuses," Zipfel says. "They're not out really to gain attention. They buy that vehicle because it represents the kind of lifestyle that they live."

Of course, owning the truck isn't for everyone, if only because it costs as much as $60,000. Hummer devotees who want to drive off-road like a pro can fork over another $2,000 to $5,000 to attend the Hummer Driving Academy near South Bend, Ind. It's a sprawling complex of acres of woods filled with obstacles and potholes.

Instructor Pete Martin takes the Hummer through a series of obstacles, easing the truck onto rollers that give only one-wheel traction, and then over a log — easy as pie. The Hummer goes over a 16-inch vertical step. It's almost like the truck is walking up the step one wheel at a time. On the back trails, the Hummer lurches left and right at alarming angles. It bumps through huge holes filled with mud, ice and water that would stop a normal truck in its tracks.

But it's safe to say that most Hummer owners are more likely to drive it to the corner store to get a gallon of milk. Despite the Hummer's successful past, Berman wonders if its days are numbered.

The economy is slumping. Gas prices will eventually rise. There's worry about climate change. Last year, GM only sold 20,000 of the H3. Berman says this is still America, and it's fine to drive a Hummer for whatever reason you want.

But, he says, "I think the marketplace has spoken, and it will go the way of the dodo bird."

Not so fast, say devotees and GM — the Hummer fills a serious need not just in the U.S., but in parts of the world where good roads don't exist.