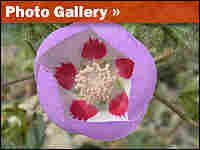 Wildflowers In The Southwest

This year has turned out to be a good blooming year, according to Gail Sevrens, state park district services manager for the Colorado Desert District, which includes Anza-Borrego.

"We'll have a good blooming year in general only a couple times a decade," Sevrens says. "This is unusual because we had one last year, too."

Among the wildflowers currently in bloom in the park: brown-eyed primrose, sand verbena, desert sunflower, desert chicory, the elusive desert five-spot and the "holy grail" of desert wildflowers, the desert lily, distinguished by its undulating leaves.

The profusion of flowers this year comes despite the fact that California is experiencing a drought. Sevrens says it's not just the amount of rain but timing and other weather factors that determine whether wildflowers will bloom. Rain followed by warm weather will make flowers "pop," she says, whereas rain followed by wind can dry out the soil and not help the flowers too much.