Accessibility links
Digital TV Goes Dark For Some Rural Viewers For some rural Americans, the move to digital television also depends on an upgrade to their local translator, a big antenna that brings distant TV signals into faraway towns. In many cases, those upgrades are too costly or complicated to take place. 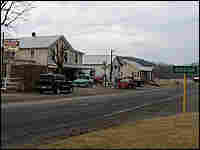 Rural Bergton, Va., is among some rural areas having trouble with the digital TV conversion. Bergton's translator, a large antenna in the hills, needs an upgrade that is expected to be so costly that some wonder whether the government should instead consider subsidized satellite TV subscriptions for rural viewers. Charlie Woodroof hide caption 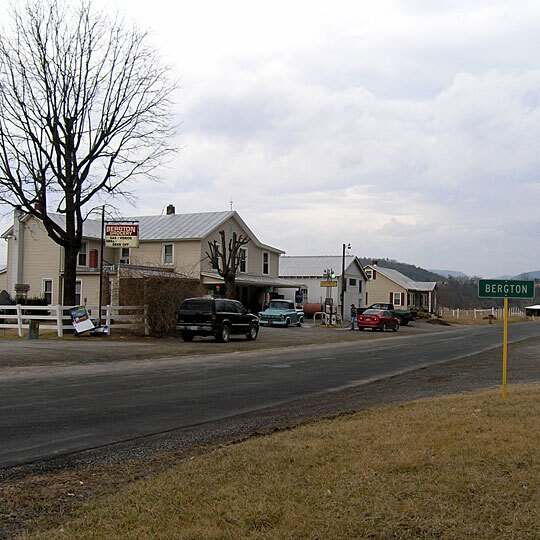 Rural Bergton, Va., is among some rural areas having trouble with the digital TV conversion. Bergton's translator, a large antenna in the hills, needs an upgrade that is expected to be so costly that some wonder whether the government should instead consider subsidized satellite TV subscriptions for rural viewers.

All 90 folding chairs were filled for the town meeting last week in the cramped auditorium at the elementary school in Bergton, Va. It was standing-room only on the fringes and out into the hallway. Close to one-third of the local population was there.

The subject wasn't taxes, health care or education. This was a town meeting about television and what happened Feb. 17, when the sole television source of local news, weather and emergency information switched off its analog signal.

"My mother and father-in-law ... lost the signal. It went totally out," reported Robert Hannam, a retired utility worker. "We bought a new TV. We bought a converter box — no signal. And everybody else in the community around here has had the same difficulty."

Public service announcements warned people in Bergton and nearby communities in rural Virginia and West Virginia ahead of time about buying converters to prepare for the digital TV conversion. But they failed to mention a key fact: Viewers of the local TV station weren't getting their TV signal directly from the station's transmitter.

Instead, that signal first traveled to a translator antenna — a device that boosts television signals from TV station transmitters to distant areas beyond their reach. The translator needs a digital converter box, just like a TV set. But translators were not part of the digital TV mandate. The result for some rural viewers: no TV signal.

More than 4,000 licensed translators (and an estimated 2,000 unlicensed antennas) bring television to thousands of rural communities across the country. They're especially critical in hilly and mountainous terrain, which describes the landscape around Bergton.

"I made the prediction four years ago that at least 50 percent [of translators] would go dark because of lack of planning," says Kent Parsons, a Utah-based translator expert and vice president of the National Translator Association.

The world of translator licensees is a hodgepodge of local counties, special television taxing districts, service clubs such as Lions or Rotary, and informal associations of ranchers, farmers and townspeople, who throw 50 bucks into a kitty every year to keep the local translator going. The work is often left to the handiest person in the community. In one county in Wyoming, a local rancher and her son volunteer to keep several translators operating.

Some of these rural licensees failed to upgrade their translator antennas for the digital conversion because of simple economics. While converting to digital costs $1,000 or less, some translators are so old and decrepit that upgrading or replacing the translator antenna itself — or a group of translators — can cost tens or hundreds of thousands of dollars.

In some places, local officials decided to shut off translators rather than pay the costs.

"Our equipment was old and worn out, and it was going to cost $300,000 or $400,000 to replace it," says John Nichols, a rancher and former county commissioner in Kit Carson County, Colo. "And that's the main reason we quit."

Translators in Kit Carson County went up in 1972 and continued to use outdated tube technology. The county built and maintained the translators, and surveyed every taxpaying household before deciding to turn the translators off for good. Nichols says that about 300 people — 4 percent of the county's population — still relied on the translators for television. Everyone else subscribes to cable or satellite service.

Nichols adds that no one has complained since the over-the-air TV signal stopped. "I checked with them the other day, and they hadn't had one phone call," he says.

A Question Of Money, Leadership, Know-How

The U.S. Commerce Department provides some money for translator conversions and upgrades. The agency says it sent postcards about funding opportunities to every licensee. More than 1,000 translator licensees have received grants so far.

But rural licensees vary widely in their technical sophistication and their management structure. In many communities, "there was no leadership, no preparation made," says Parsons of the National Translator Association. He conducted dozens of translator conversion workshops across the country.

"You must have money to buy equipment," Parsons says. "Some of them just lacked technicians who were interested in progressing. Most of them said, 'We'll just wait,'" because Congress and the FCC did not require conversion of translators.

"None of this has been addressed for these small rural communities by anybody," Parsons complains. "Not by Congress. Not by the FCC."

The FCC's Robert Ratcliffe, a top aide to the agency's acting chairman, says, "We are a bit behind the curve when it comes to translators."

Ratcliffe says the FCC will be flexible with regulations and consider licenses for new translators to reach more places. But, he adds, "It definitely would have been better if the commission had been able to address this issue more comprehensively earlier in the process."

No one knows exactly how many translator antennas went dark Feb. 17, when about one-third of the nation's TV stations went from analog to digital signals, because no government agency or private group is keeping track. But there are anecdotal reports, and more are expected on June 12, when the remaining TV stations are supposed to shut off their analog signals for good.

Meanwhile, in Bergton, Va., county officials and the local television station are scrambling to respond to the digital switch. The analog signal has been switched back on for the time being. But converting and upgrading the local translator is a huge logistical and financial challenge, because it sits on a mountaintop with no road access and no connection to the power grid. Helicopters were used to build the tower, and solar panels provide power.

The loss of the local television signal has some wondering whether television is a right. Locals say the only other detailed source of local news, weather and emergency broadcasts in the Bergton area is a radio station that doesn't reach the region after dark and before sunrise.

Losing local TV "was like my right arm had been cut off," says Donna Beale, a cattle farmer in Fox Run near Bergton. "I believe it's one of our constitutional rights to be able to have free communication and have access to the news, the weather and current local community events."

There's no cable service in the area, and some say they can't afford satellite subscriptions.

Tracey Jones is the manager of WHSV in Harrisonburg, Va., which has provided local television service in the Bergton area. She says she's committed to providing that signal somehow. But as she considers the cost of upgrading, converting and maintaining the translator, she wonders about providing subsidized satellite subscriptions instead.

"It would definitely make more sense, in some cases, than building this huge, costly infrastructure to serve a very small number of people," Jones concludes. "I guess the American people would have to decide. Is TV a luxury? Is it a necessity? And is that something we would ever consider subsidizing?"

Government: Information on the digital conversion