Accessibility links
Golden Rule Develops Early But Doesn't Come Easily A 2-year-old, it turns out, knows the difference between right and wrong. And by age 4, children are getting the grasp of empathy. While the seeds of morality may be at least partially built into our genetic makeup, for children, developing a moral sense can still be a battle of impulses. 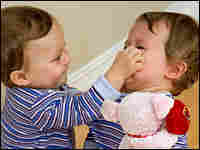 In this photo illustration, toddlers do battle over a toy. Psychologist Judi Smetana says that by age 2, children begin to develop a sense of morality. iStockphoto.com hide caption

A 2-year-old, it turns out, knows the difference between right and wrong. According to psychologist Judi Smetana, the sense of morality begins to develop early in humans. And by the time children are 3 to 4 years old, they recognize certain behaviors — such as hitting — as wrong, even when no one is watching, says Smetana, a professor at the University of Rochester.

Children are also capable of distinguishing between social rules and moral rules.

For instance, kids tend to know that raising your hand before speaking in class is a social rule, while head-butting another kid is breaking a moral rule.

By asking questions such as, "Would it be OK to hit if there were no rule about it at your school?" Smetana is able to probe the inner workings of the minds of preschoolers, gaining valuable insight into the development of moral decision-making.

Smetana believes that children know more about morality than they're able to articulate, especially when they're toddlers. "We are born with some very rudimentary sense of empathy hard-wired in," she says.

A study published last month bolsters the theory that empathy is coded into human genes. A team of scientists from the University of Wisconsin, Madison, and Oregon Health and Science University found that a highly social strain of mice could learn to connect a tone played in a specific cage to something negative, merely by hearing the distressed squeak of a mouse who received a shock in the cage when the tone was played. When a mouse who had observed the distress was then placed in the cage and played the same tone, it exhibited signs of stress even though it did not experience a shock.

If a highly social mouse can relate another mouse's stress to itself, does this suggest that there's an evolutionary advantage to empathy? And if humans have inherited this advantage and are in fact genetically hard-wired to be empathetic, how does empathy relate to the moral development of children?

Smetana knows from her work with preschoolers that even though young kids can tell what's wrong — like hitting or taking another's toys — they still hit each other and take toys. This is due, in part at least, to what some researchers call the "happy victimizer effect." In other words, it feels good to get your way. Yet thanks to empathy, kids realize that the reverse is also true: When someone bullies you, it doesn't feel so good. This push and pull helps forge a child's moral universe.

"The task of a young child's development," Smetana explains, is to coordinate the perspectives of the victim and the transgressor, and weight it to the way the victim feels.

The golden rule, it seems, still very much applies.