Accessibility links
A Treasure Found Among Blood Diamonds In 2001, reporter Deborah George was in Sierra Leone reporting on how the worldwide trade in illicit diamonds was fueling the war. There, she found a little girl who was too young to have her dreams be over. 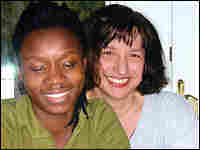 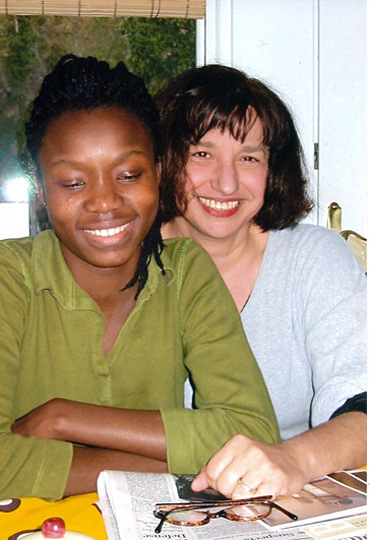 Deborah George (right) says Baindu stole her heart when she met the young girl at a center for children who'd been kidnapped during Sierra Leone's war.

Every war brings new words and phrases into the lexicon. During the civil war in Sierra Leone, Americans learned about "blood diamonds." For more than a decade, rebels in that country kidnapped thousands of children to fight with them and to help them extract the diamonds that lay under the earth. Those diamonds were then traded for guns and ammunition. In 2001, I was in Sierra Leone reporting on how the worldwide trade in illicit diamonds was fueling the war.

It was the rainy season, and I was on my way east to the diamond fields on a road lined with burnt-out cars and buses. In some places, there were pits filled with muddy water. They were formed when the rebels had forced people to dig for the diamonds that lay just under the ground. Near one village that had been raided by the rebels, I came across a center for children who'd been kidnapped during the war.

These children had either escaped or been released during negotiations that were then going on between the government and the rebels. Most of them had missed years of school and even some of the older teenagers were just learning the alphabet. The boys had fought as child soldiers. There were girls there, too, and I asked if I might speak to some of them, one at a time.

The girls described how they'd been kidnapped and forced to work in the diamond mines. They told me about seeing airplanes landing in the bush. The planes carried white men who brought drugs and weapons to the rebels and left with the diamonds. One of the littlest girls I interviewed looked like an old woman in an oversized shirt. While she talked, her tiny hands twisted the cloth of her faded lapa.

She told me her name was Baindu. I asked her if she'd ever spoken into a microphone before. "No," she said, and I rewound the tape a little and held my headphones to her ear so she could hear her own voice. Then I pushed the record button. "We are starting?" she said. I laughed and thought, "She's a smart one."

Baindu told me that one day when she was about 8 years old, she and some other children had gone into the bush near her village to pick cassava leaves. They'd bring them home and pound them with wooden mortars. And their mothers would make a thick stew to eat with rice.

All of a sudden a group of rebels attacked and carried the children off. They were brought to a rebel camp and forced to work in the diamond pits. While men with AK-47s stood watch, the littlest children dug and sifted the mud with wooden shakers looking for diamonds.

One day, Baindu persuaded the rebels to let her walk a little into the bush to relieve herself. When she was just out of sight, she took off. She ran barefoot for miles until she found her way to a road and then found someone to help her get back to her village. While she'd been gone, her parents had been killed in a raid.

The little girl was angry about what had happened to her. Now, she said, she had one wish: to go to school and become a teacher.

A Lightning Bolt To The Heart

It was time to go, so I took her picture and left. I was standing by the gate to the compound waiting for a ride when it started raining. All of a sudden the little girl was at my side with a big black umbrella, trying to hoist it over my head. I took it so we were both covered. Then she put her hand in mine and we waited together.

The French use a warlike phrase to describe love at first sight — they call it a "coup de foudre" — meaning a kind of lightning bolt to the heart. That's what happened to me. In those few minutes there in the rain. The little girl's fierce longing seized my heart. She was way too young to have her dreams be over. And out of all the children I'd met, I thought, this one could make up for the lost time. She could have her childhood back. Together, we could defeat war itself.

I got back to the States and sent her picture to a friend, a Sierra Leonean journalist who went and found her. I sent money for her school fees and eventually placed her in a boarding school that reopened when the war ended. There were no books, running water or electricity, but it was safe. After several years of red tape, adoption regulations and a child-trafficking investigation, Baindu finally came to the U.S. on a plane, by herself.

Today, the kid who ran through the bush to escape the rebels is the fastest girl on her soccer team, covering the ground with long easy lopes. She's in 11th grade and loves hip hop and hamburgers. She doesn't like to talk about the past. She doesn't forget, she says. When she's old, she'll still remember her stories. But, it's better, she says, to look to the future.

Deborah George is a writer and radio producer who lives in Takoma Park, Md.