A 2007 Russian remake of the classic 12 Angry Men opens in New York and Los Angeles this weekend.

American moviegoers are getting their first look at a different kind of adaptation this weekend. It's a Russian twist on a classic American hero. Remember Henry Fonda standing up to 11 ethically challenged members of his jury pool in "12 Angry Men"?

Mr. HENRY FONDA (Actor): (as Juror #8): You want to see this boy die because you personally want it, not because of the facts.

LYDEN: Transform the setting from 1950s America to modern-day Russia, change the Latino teenager on trial to a Chechen Muslim, and turn it all over to Nikita Mikhalkov, who directed the Oscar-winning "Burnt by the Sun." What you get is this.

LYDEN: It's a new movie called "12," and it's debuting in New York and Los Angeles theaters this weekend. And to dissect "12 Angry Men," we've brought in one genial film critic, NPR's Bob Mondello. Welcome.

BOB MONDELLO: It is good to be here.

MONDELLO: I try not to be angry, anyway.

LYDEN: So this has been an American staple, "12 Angry Men," for high school civics classes for decades now. Does it work in a Russian setting?

MONDELLO: No. It's a real adaptation, a very different adaptation because all the stories, for instance, that the characters tell - they talk about their own lives, they talk about things that they've seen outside. There's a funeral director who talks about the various ways of cheating the bereaved at his cemetery in the new, capitalist society.

And you know, those kinds of things, it's just a different feel. And at about the two-hour point, you think you have reached the conclusion of the original Reginald Rose screenplay, and then there's this last half hour where it just goes in a completely different, very Russian, direction, and it's really neat.

MONDELLO: Well, what's really the same is the basic laying out of the trial. You remember there was a scene in the original where they made a big deal about the importance of the knife, of the uniqueness of the knife that only this kid could've had it, and Henry Fonda during the trial, apparently, went out and found one just like it, and he brings it back in and shows them.

Unidentified Man #1 (Actor): (As character) Where did that come from?

Mr. FONDA: (As Juror #8) I bought that at a little pawnshop just two blocks from the boy's house.

MONDELLO: Now, what's interesting about this version is that knife is unique because it only could be gotten by a Chechen, they say, and so you have essentially the same moment in Russian.

(Soundbite of television program, "The Simpsons")

Mr. DAN CASTELLANETA (Actor): (As Homer Simpson) How are the rest of you voting?

Mr. CASTELLANETA: (As Homer Simpson) Okay. How many Ss in innocent?

MONDELLO: Is that "The Simpsons"?

LYDEN: Yeah, that's the "Simpsons" take. And we just put that one in there for you.

LYDEN: What is it, though, about this story that makes it so resonant? I mean, it really hasn't faded. Lots of things get dated. This seems not to.

MONDELLO: Well, I think the notion of the central people in society, in this case 12 men being angry about the other, is resonant in any society. And if the other is a Hispanic immigrant, as it was in the original, if it is - you know, it could just be almost anything, so I think that that resonates.

And then the idea of justice being important. And I mean, have you ever sat on a jury case? It's inconvenient. It's the most annoying thing in the world when you get the jury summons, and you think no, I don't have that time. But oh, my God, when you're there, it's the most fascinating thing to puzzle things through.

I've been on a bunch of them, and every time, I have the same reaction going in and the same reaction coming out, that I'm so glad I did that. Well, I think that's what resonates in this. And I think if you've ever been in a jury room, you know that this thing is so real.

LYDEN: NPR's Bob Mondello. You can find his review of "12" on our Web site, npr.org. Thanks so much, Bob.

MONDELLO: It's always a pleasure. 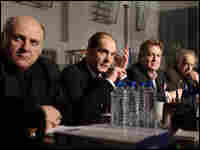 Down The Line: Twelve men must reconcile their differing opinions in the trial of a Chechen boy accused of murder. Milena Botova/Sony Pictures Classics hide caption 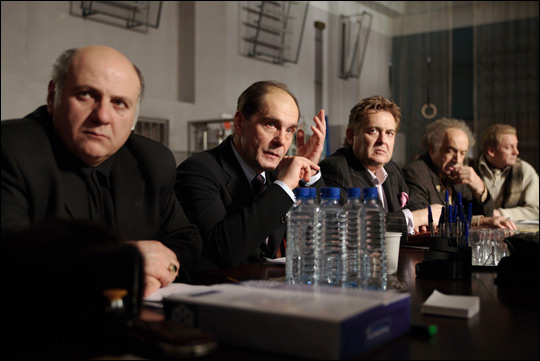 Down The Line: Twelve men must reconcile their differing opinions in the trial of a Chechen boy accused of murder. 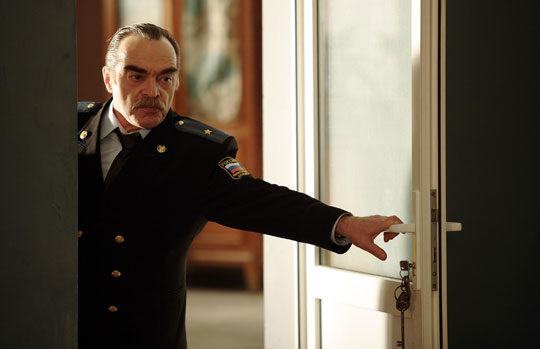 Sidney Lumet's 1957 film adaptation, which chronicles the efforts of a dozen jurors to reach consensus in a murder case, feels quintessentially American. Henry Fonda, standing up for "reasonable doubt" while his fellow jurors, pale males all, hurry to convict a nonwhite defendant accused of stabbing his father to death? Who needs baseball, much less pie?

As all-American as that version was, there's a universality to any story of individuals grappling with a group decision. And as Mikhalkov quickly establishes, this particular story plays very differently in post-Soviet Russia.

Here the accused lad is a Chechen Muslim teenager, jailed on charges of killing his Russian adoptive father in a newly capitalist Russia, so there's a wartime back-story involving ethnic hatred and economic tensions.

And in what may be an oblique nod to Chechnya's horrific Beslan school siege, the jury is sequestered not in the court's regular jury room (it's being renovated) but in an elementary-school gymnasium. That location, happily for the dozen variously ferocious Russian performers who inhabit it, is filled with all sorts of actor-friendly props, which are quickly put to excellent use.

The stories the jurors tell, of course, are different from the ones Rose put in his characters' mouths, filled with arguments that reference local tensions and situations possessing a distinctly Chekhovian flavor. As the men consider and reconsider the evidence, they end up offering a vivid portrait of Russian society.

A racist cab driver bridles at an older juror's Holocaust story; a funeral director muses about newfound capitalist ways of cheating the bereaved, a TV producer who sees the world through plotlines proves hugely susceptible to one that involves his family. A surgeon wields both the murder weapon and his own ethnicity as skillfully as he would a scalpel, and a scientist tells of a uniquely success-fuelled descent into alcoholism.

The relationship of the stories to the crime may on occasion feel tenuous, but Mikhalkov does something to connect them with the murder case that Lumet didn't: This version keeps reminding you what the stakes are by letting you see the defendant (Apti Magamaev) pacing his jail cell, flashing back to harrowing experiences he had as a child in the Chechen conflict.

The effect is of opening up the story while making it grandly, emphatically Russian in character. And when a sparrow flies in the room, bringing the outside world in even as it becomes yet another prisoner — the jurors, remember, are themselves locked in until they arrive at a verdict — the story shifts dramatically from the original to ask questions outside the provenance of 1950s American jurisprudence. They're questions that seem wholly appropriate, and thoroughly unnerving, today.