Accessibility links
To The Brain, God Is Just Another Guy Researchers think they know where religious beliefs exist in the brain. A new study finds that thinking about God activates the same parts of the brain we use for empathy and human understanding. The research also suggests that religion may have developed as the human brain evolved its capacity for complex social interactions.

Listen
To The Brain, God Is Just Another Guy 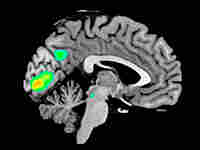 Brain scans of participants thinking about God show activation in the same part of the brain where people empathize with others. One such brain region, called the precuneus (the upper green dot), is also associated with imagination, balancing complex tasks and self-consciousness. Kapogiannis et al/PNAS hide caption

Brain scans of participants thinking about God show activation in the parts of the brain where people empathize with others. One such brain region, called the precuneus (the upper green dot), is also associated with imagination, balancing complex tasks and self-consciousness. During the same scan (see far left and far right images) there was also activation in visual processing areas, indicating that humans visualize God using the same brain networks involved when humans visualize themselves.

The human brain, it appears, responds to God as if he were just another person, according to a team at the National Institutes of Health.

A study of 40 people — some religious, some nonreligious — found that phrases such as "I believe God is with me throughout the day and watches over me" lit up the same areas of the brain we use to decipher the emotions and intentions of other people.

"There was no difference," says Jordan Grafman, who runs the cognitive neuroscience section at the National Institute of Neurological Disorders and Stroke.

Grafman says the finding, published in the Proceedings of the National Academy of Sciences, shows that there is no special circuitry in the brain that deals with religious belief. It also suggests that religion developed as the human brain evolved its capacity for complex social interactions.

Studying Religion In The Brain

Grafman was part of a team that used functional magnetic resonance imaging (fMRI) to study the brains of 40 people as they read statements that either supported or challenged religious belief. Participants were asked whether they agreed or disagreed with statements such as, "God is angry at human behavior," or "There is no higher purpose."

The statements caused heightened activity in areas of the brain involved in empathy, and in deciphering what other people might be thinking. Scientists often refer to this ability as "theory of mind" or "theory of other minds." Humans are extremely good at it. Some other species, including great apes, appear to have a less advanced theory of mind.

Grafman says there were some differences between religious and nonreligious people.

Those who said they believed in God had a negative emotional response to statements like, "There is no higher purpose." Nonbelievers had the same reaction to statements that assumed God exists.

Grafman says the results show that, to the brain, religious belief is a lot like political belief.

"If you're very conservative and you have to make a judgment about what looks like a liberal statement and you disagree with that, you might find this very same brain system being activated," he says.

Grafman says the new study says nothing about whether God exists. But it does suggest that religious belief uses a brain system that evolved quite recently.

"Some of the same underlying abilities that support other sorts of complex human social behavior also support the behavior that we're terming 'religious belief,' " he says.

The Origins Of Religion

Grafman says that probably means religions appeared as humans evolved the ability to handle complicated social interactions during the past 60,000 years or so.

Joseph Bulbulia, an expert on the cognitive psychology of religion at Victoria University in New Zealand, says most evidence of religious behavior only dates back about 10,000 years, raising questions about why humans didn't become religious sooner.

But he agrees that religious belief probably had a role in human evolution because it has helped societies survive and thrive for thousands of years.

Religion As A Social Behavior

Without religion, Bulbulia says, "large scale cooperation, which now spans the world, would be impossible. He adds that humans differ from other species in their ability to cooperate in very large groups.

Religion can help foster cooperation because it ensures that people share the same set of rules about behavior, and think they'll be punished if they don't follow them, Bulbulia says. Religion also unites people, especially in times of great uncertainty.

Bulbulia says that's probably why President Obama's inaugural address contained phrases such as, "With eyes fixed on the horizon and God's grace upon us, we carried forth that great gift of freedom and delivered it safely to future generations."

Bulbulia says much of that speech was about how people have survived hard times in the past by working together.

And that means using the areas of the brain involved in empathy and understanding.