Accessibility links
Modern Variations On China's Traditional Themes Many Chinese are convinced that whatever sort of modernization their country achieves, it must combine aspects of Chinese traditional culture with imported Western institutions. 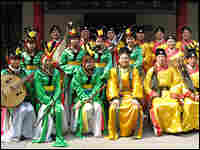 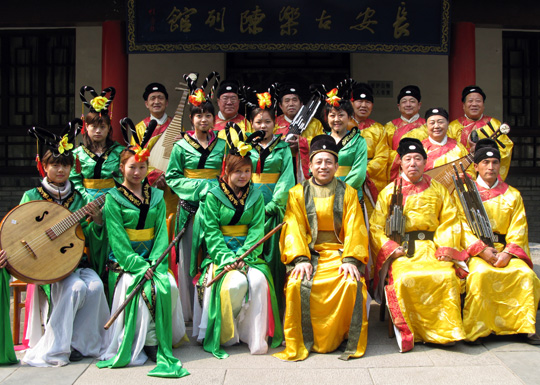 In China's domestic newspapers, it's not unusual to see headlines that hark back to ancient Confucian traditions: China's leaders call for moral governance; rules for civil servants threaten punishment for showing disrespect to elders; mainland Chinese and Taiwanese politicians worship at the tomb of the Yellow Emperor, legendary patriarch of Chinese civilization. The message of these headlines is clear: China's leaders want to portray themselves as protectors of traditional morality and architects of a restoration of China's erstwhile glory.

These throwbacks may seem odd in a country where the quest for modernity has been a dominant theme of the past century and a half. But such references are a reminder that as the world's oldest living civilization, China cannot easily cast off the influence of its traditional culture, even if it wants to. Many Chinese are convinced that whatever sort of modernization their country achieves, it must fuse aspects of Chinese traditional culture with imported Western institutions.

The Tang Dynasty is an example of the link between China's openness and its international influence. The Tang marked the apogee both of China's cosmopolitanism and an unprecedented golden age of culture. It's no coincidence that this era also saw China greatly expand the reach of its "soft power," as its neighbors, including Japan, Korea and Vietnam, imported Chinese forms of architecture, literature and government.

But much of China's traditional culture now lies half-buried, and exhuming it has been difficult. For much of the past century, traditional culture — particularly Confucianism — was blamed as a key factor in China's falling behind the West and suffering at the hands of imperialism. Many Chinese equate Confucianism with authoritarian rule and contempt for science and technology. This trend culminated in the 1966-1976 Cultural Revolution, when the country engaged in systematic destruction and disavowal of its own heritage. As a result, many young Chinese are unaware of and cut off from their country's cultural roots.

It can be easy for observers of China to ignore or shortchange the importance of traditional culture, because it is not always obvious. It often functions beneath the surface, influencing how and why people do things. If we are to see how far China has progressed in its modernization, we must understand from where it has come. If we seek to explain China to others, we would be remiss not to illustrate the cultural context of events that gives them meaning.

Many experts point out that China considered itself a civilization long before it saw itself as a nation. Through millennia of constant and often violent change, that civilization today remains a living, functioning entity. Its impact will continue to be felt around the world, regardless of whether or not we make the effort to understand it.

When China was largely closed to the outside world, for example, during the first three decades of communist rule, it was easier to remain ignorant of China's contribution to world history, and to equate world civilization with Western civilization. Now that China has been opening up to the outside world for more than a generation, our excuses are getting fewer and fewer.