Accessibility links
School Of Seven Bells: Reaching New Heights On record, School of Seven Bells has a thick, layered sound, but in KEXP's studios, the Brooklyn trio stripped down to two acoustic guitars and a keyboard. The songs took on a warm, intimate feel with the otherworldly harmonies of the Deheza twins filling the air. 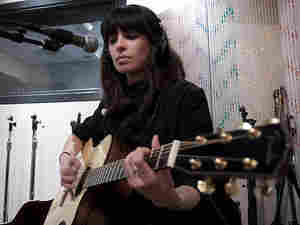 One of my favorite albums of 2008 was the debut release by the Brooklyn trio School of Seven Bells. The album title, Alpinisms, couldn't be more appropriate — like the thin air at a high elevation, the band took my breath away during this in-studio session.

The album has a thick, layered sound, so it was a treat to see the band perform in a stripped-down acoustic style, only using a couple of guitars and a keyboard. The songs took on such a warm, intimate feel, and the otherworldly harmonies of twin sisters Alejandra and Claudia Deheza really resonated in the KEXP performance space. When the voices of all three band members intertwined during "White Elephant Coat," I truly felt lightheaded.

In the interview, the band explained that the title has more to do with a book by Rene Daumal and the philosophy of having respect for the thing that you're climbing. So it's only appropriate that this session from School of Seven Bells climbed my list of favorite in-studio performances.