Accessibility links
Woody The Acorn (Not Pileated) Woodpecker When commentator and resident bird expert Julie Zickefoose said that Woody Woodpecker is a pileated woodpecker, she ruffled some feathers in the ornithological community. Turns out that Woody is actually an acorn woodpecker, but maybe, just maybe, it doesn't matter all that much. 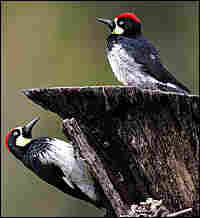 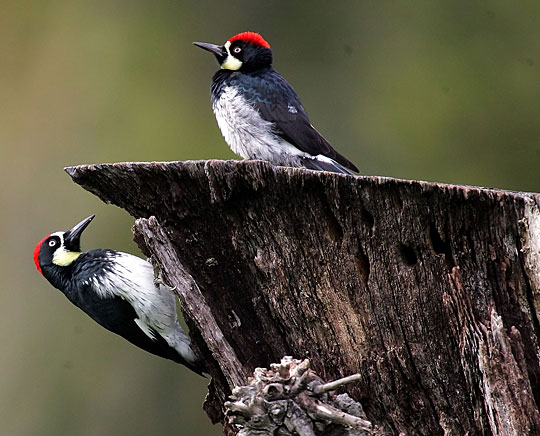 Woody's ilk. And you thought all woodpeckers looked the same, didn't you?

On March 2, All Things Considered aired a story about a California community that was fighting an onslaught of acorn woodpeckers, a protected species that sometimes makes holes — lots of holes — in house siding. In that story, the reporter asserted that the popular cartoon character, Woody Woodpecker, was modeled on the acorn woodpecker. And a listener or two questioned that assertion. To find out the truth, Melissa Block e-mailed me, the All Things Considered bird commentator. And I got it wrong.

But hey, bad calls are part of birdwatching. Any birdwatcher can tell you that. Mostly, we are kind to each other when a bad call is made, although I did bird briefly with a guy named Dennis who would emit a startling EHHHHHHH, like the buzzer on Jeopardy if, in your excitement, you got a titmouse confused with a gnatcatcher. Thankfully, I now go birding with people who are content to gently correct me, or snicker quietly to themselves.

When Block e-mailed me to find out just what Woody Woodpecker was, I was taking a break from birding, sitting on a veranda in verdant, lush Honduras, my laptop on my knees and a half-bottle of red wine by my side. I'm just sayin'. Wasn't it obvious, with his shaggy crest, long beak and wild laugh, that Woody was supposed to be a pileated woodpecker? I e-mailed right back. "Woody is modeled on the pileated woodpecker, right down to that wild laugh." Well, not so fast, Ms. Zickefoose.

All over the Internet, there are listservs discussing weighty matters, like how to identify immature crossbills, and just how the wing feather of a short-billed dowitcher differs from that of a long-billed dowitcher. There are people who really, really care about this stuff, and I'm grateful for them. They write the books I use in the field. I am a quick and dirty kind of birdwatcher, and here's a little secret: I don't really care about dowitcher feather markings.

One of those people who does care is an eminent ornithologist named Kimball Garrett, and when he and some other ornithologists heard Block relay my ill-considered and perhaps even slightly boozy statement that Woody is based on a pileated woodpecker, they started losing feathers, and hopping up and down, and shooting messages on the Bird ID Frontiers listserv.

Several of them happened to know the truth and had discussed it at length, in between identifying puzzling shorebirds, curating museum collections and writing books and stuff like that. It turns out that Walter Lantz, the animator who created Woody Woodpecker, had personally given Garrett a copy of his biography, and in that book it says that Walter and his wife, Grace, while honeymooning in a California cabin, were amused by an acorn woodpecker who was poking nuts under the roof shingles. They liked the "little raucous scream" the bird emitted. Grace said to Walter, "Why don't you make him into a character?"

We all know that animators are a bit fast and loose with their biology, and I am not trying to excuse myself here. But let's recall the Latin names for the Road Runner (Tastyus supersonicus) and Wile E. Coyote (Eatibus anythingus). So I think, even when you factor in the wine, the fact that Woody looks a lot like a pileated woodpecker and nothing at all like an acorn woodpecker is, at the very least, misleading. And the fact that eminent ornithologists spend at least some of their time getting all het up about the proper identification of zany animated characters, well, that just makes me laugh like a cartoon woodpecker.

Julie Zickefoose spent 20 years illustrating books and articles about birds, even painting plates for field guides, but she still frequently makes bad calls and snap decisions about bird ID. She now illustrates her own books with whatever she feels like painting, which, she says, is probably better all around.