Accessibility links
Lemony Snicket's Musical Murder Mystery The popular children's book author turns his attention to a macabre event at the orchestra, complete with music and illustrations. Daniel Handler, acting as Mr. Snicket's mouthpiece, investigates the mystery, starting with the death of the composer.

Introduction From 'The Composer Is Dead'

The Percussionists, From 'The Composer Is Dead'

Read An Excerpt From The Book 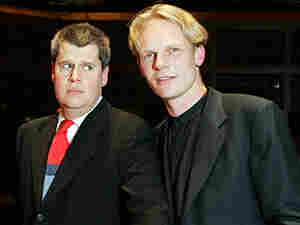 There's a mystery to be solved in the orchestra: The composer is dead, and the suspect is still at large.

Author Lemony Snicket, best known for the popular Unfortunate Events series of children's books, has been following the investigation closely. In his new picture book, The Composer Is Dead, illustrated by Carson Ellis, he turns his suspicions on the entire orchestra.

"Anyone who enjoys classical music knows that members of the orchestra are automatically suspicious people, accused constantly of various treacheries," says Daniel Handler, a representative of Mr. Snicket. "And so it seemed natural that they might be responsible for the death of the composer."

The tale is told in both a picture book, illustrated by Carson Ellis, and an accompanying audiobook CD, with music scored by Nathaniel Stookey and performed by the San Francisco Symphony. Lemony Snicket himself narrates that CD, though his voice sounds quite similar to that of Daniel Handler.

Handler, who works very, very closely with Mr. Snicket, spoke with host Michele Norris about his — er, their — latest project. The inspiration came from when he was invited to narrate a performance of Sergei Prokofiev's Peter and the Wolf, commonly played to introduce children to the orchestra.

"And then it also occurred to me that a) so many people were tired of taking their children to hear Peter and the Wolf over and over again; and that b) in some ways, Peter and the Wolf doesn't really teach you about the orchestra," Handler says. "As someone who had grown up on classical music and was in love with the orchestra, I saw there was an opportunity here to make a piece which might speak more directly about the instruments and how they work together."

Click the link at the top of the page to hear the full interview with Daniel Handler (on behalf of Lemony Snicket).