Accessibility links
Freeman Withdraws From Key Intelligence Post Chas Freeman, a veteran diplomat picked in February to lead the National Intelligence Council, says he will not serve. A former U.S. ambassador to Saudi Arabia under President George H.W. Bush, Freeman was attacked by Republican senators for his criticism of recent U.S. policy on China, Israel and the war on terrorism. 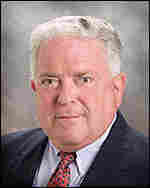 Read Freeman's Note To 'The Cable'

Chas Freeman, picked by the Obama administration to lead the National Intelligence Council, has withdrawn his agreement to serve in that position.

Freeman, a veteran diplomat who was ambassador to Saudi Arabia during the first Persian Gulf war, had come under fire for statements he has made in the past about China and Israel and for alleged ties to foreign governments.

His withdrawal came just hours after National Intelligence Director Dennis Blair said at a congressional hearing that he was standing behind Freeman as chairman of the council, which analyzes national security issues.

Last month, announcing that Freeman was his choice to serve in the post, Blair cited Freeman's "wealth of knowledge and expertise in defense, diplomacy and intelligence."

The council is a kind of think tank for the U.S. intelligence community, preparing "National Intelligence Estimates" for policymakers on key security issues and global hot spots.

Freeman served under the first President Bush as an assistant secretary of defense before becoming the U.S. envoy to Saudi Arabia.

He started his diplomatic career as a China specialist and was President Richard Nixon's interpreter on Nixon's groundbreaking 1972 trip to China.

But in recent years, as a private citizen, Freeman has been an outspoken critic of some U.S. policies regarding China and Israel, as well as aspects of the war on terrorism.

Because of that, his appointment to the National Intelligence Council was vigorously criticized.

Though a series of former U.S. diplomats rallied to his defense, all seven Republican members of the Senate Intelligence Committee took a stand opposing Freeman's appointment.

His selection was not subject to Senate confirmation, but Freeman apparently decided to halt the controversy. According to a statement from Blair's office, Freeman requested that his selection "not proceed." Blair said he accepted Freeman's decision "with regret."

In a message posted on The Cable, Foreign Policy magazine's blog, Freeman blamed the "Israel lobby" for his decision.

"The libels on me and their easily traceable e-mail trails show conclusively that there is a powerful lobby determined to prevent any view other than its own from being aired, still less to factor in American understanding of trends and events in the Middle East," he writes in the message. "The tactics of the Israel Lobby plumb the depths of dishonor and indecency and include character assassination, selective misquotation, the willful distortion of the record, the fabrication of falsehoods, and an utter disregard for the truth."

Freeman's financial, personal and business ties with the governments of China and Saudi Arabia have also been called into question. He was president of the Middle East Policy Council, which received some funding from the Saudi government, and he is on the international board of advisers to a Chinese government-owned oil company.

The congressional complaints resulted in an inspector general's investigation into Freeman's ties to the Saudi government.

"We learned from eight years of the Bush administration that intelligence cannot be cherry-picked. It cannot be colored by opinion or even the appearance of conflict," Israel said.