Accessibility links
Smoggy Skies May Cause Respiratory Death Just living in a smoggy city can make you 30 percent more likely to die from lung disease, according to a new study in the New England Journal of Medicine. Nearly 1 out of every 3 Americans lives in a city with unhealthy levels of smog, and there are few ways to limit exposure without cleaning it up. 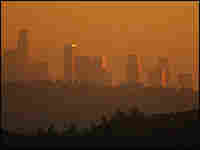 The downtown skyline of Los Angeles, enveloped in smog in 2006. Los Angeles is the second smoggiest city in the U.S, according to a new study in the New England Journal of Medicine. David McNew/Getty Images hide caption 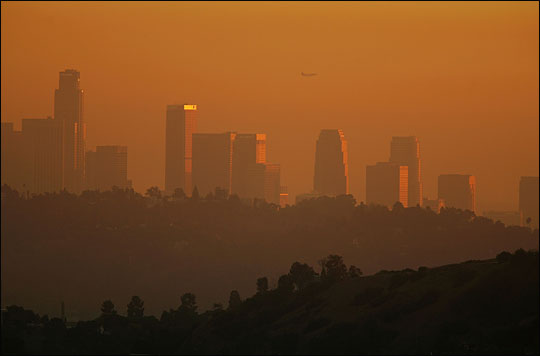 The downtown skyline of Los Angeles, enveloped in smog in 2006. Los Angeles is the second smoggiest city in the U.S, according to a new study in the New England Journal of Medicine.

People living in the smoggiest cities are 30 percent more likely to die from respiratory diseases, including pneumonia, than those living in the least smoggy areas, according to a new study published in the New England Journal of Medicine.

The nationwide study of 450,000 adults is the first to document the long-term impact of ozone on human health.

It's estimated that 100 million Americans — or 1 in 3 — live in cities with unhealthy levels of ground-level ozone. Ground-level ozone — the major component of smog — forms when tailpipe emissions combine with sun and hot air. Smog season runs from April through October in Southern California, and is slightly shorter in cooler regions of the country, such as the Mid-Atlantic and Northeastern states.

Researchers and physicians have known for many decades that spikes in air pollution during the summer months cause health problems. Asthmatics experience more flare-ups, and there are more hospital admissions for respiratory ailments and heart attacks.

The new study provides the first evidence that long-term, chronic exposure to elevated levels of ozone significantly increases the risk of death from respiratory diseases.

"The study points to the fact that there may be a three-fold increased risk of dying from respiratory disease in the smoggiest areas of the country," says Dr. John Balmes of the University of California, San Francisco.

The adults in the study, originally recruited by the American Cancer Society, were tracked for 18 years. During this time, about 118,000 people died. Michael Jerrett, a researcher at the University of California, Berkeley and his colleagues then teased out the causes of death. They documented that people living in the smoggiest cities were more likely to have died from lung diseases such as chronic bronchitis, emphysema and pneumonia.

Jerrett and his team controlled for 44 individual factors that may have influenced the results, such as smoking, alcohol consumption, occupational exposures, unemployment status and income. But even after that, he says, "We still see a very strong and clear signal that people in high-ozone areas are at higher risk of death."

During the summer smog season, people with respiratory conditions such as asthma are told to stay indoors. And some cities offer free public transportation on days when ozone levels are extremely high.

But other than staying indoors, there are few ways to limit chronic, cumulative exposures.

"We know that ozone causes inflammation of the airways," explains Balmes. "And that chemical burning makes people more susceptible to infectious agents like viruses and bacteria that cause pneumonia."

If people are interested in reducing smog, experts say the best thing they can do is to drive less, especially during the summer months.

Most emissions in the smoggiest cities come from cars and other vehicles.

Another way to cut ozone is to change federal regulations. Current clean-air laws, which helped reduce smog throughout the '80s and '90s, were aimed at preventing summertime spikes.

"The law of the land restricts the peak levels on the highest days of the year," says George Thurston of New York University's Langone Medical Center.

Given the new evidence, advocates will likely push for a new "annual average" standard that aims at further reducing the overall burden of smog.