Accessibility links
A Temperature Hike Can Trigger Migraines Researchers know that migraine headaches can be triggered by factors like a lack of sleep, certain foods or stress. A new study shows that weather can also trigger severe headaches, with some people suffering migraines when the temperature rises. 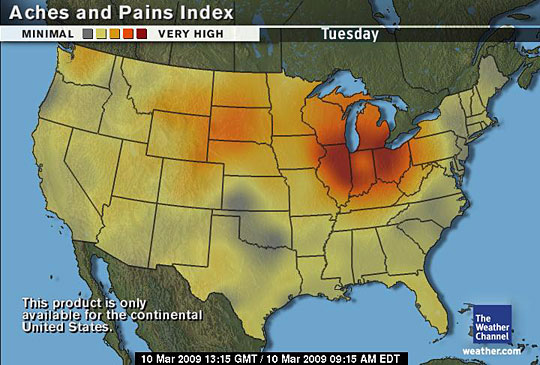 The Weather Channel's Aches and Pains Index map claims to depict areas of higher or lower levels of weather-related pain.

Courtesy of The Weather Channel/weather.com

If you suffer migraines when the weather changes, the temperature outside could be to blame. In a new study of thousands of people who showed up in a Boston emergency room with severe headaches, a spike in heat was found to be a strong migraine trigger.

"This adds weight and evidence to the idea that environmental triggers are important — not just clinical folklore," says Dr. Kenneth Mukamal, a researcher at the Harvard School of Public Health and internist at Beth Israel Deaconess Hospital in Boston. Mukamal says he and his team designed their study, published in the current issue of the journal Neurology, to put that folklore to the test and also "to determine whether air pollutants trigger headaches, much as they have been found to trigger stroke."

It's The Heat Increase That Matters

The researchers analyzed the cases of more than 7,000 patients seen in the Beth Israel emergency room between May 2000 and December 2007 with a primary diagnosis of headache. Only 2,250 were diagnosed with migraines; the rest had "tension or unspecified headache." Mukamal and colleagues then checked meteorological records for various weather and pollution variables at the time of each patient's ER visit, and compared that to the same sort of environmental data a few days before and one week after the visit.

According to the findings, on the days of the hospital visits the air temperature tended to be warmer. In fact, for every 9 degrees Fahrenheit increase in temperature, Mukamal found a 7.5 percent increase in the risk of a headache severe enough to provoke a trip to emergency room. There was also a weaker association between non-migraine headache and low barometric pressure a day or two before the hospital visit, Mukamal says. In this study, humidity and air pollution seemed not to be headache triggers.

It's not that the hotter it was, the more likely patients were to have a headache, Mukamal stresses. Rather, it is the temperature increase that matters. The risk was greater on days that were "warmer" relative to similar days during the month.

"The study provides solid evidence that those common beliefs [about weather changes and headaches] are true," says Dr. Richard Lipton, director of the National Headache Foundation, and a neurologist at the Albert Einstein College of Medicine in New York.

Though the Boston study found air temperatures to be the strongest weather trigger, both Mukamal and Lipton emphasize that environmental triggers of migraine vary widely from person to person.

Know What Triggers Your Migraine

"Triggers have additive effects," Lipton says. "For example, a woman with menstrual migraine may notice she can drink red wine most of the month, but not on the first couple of days of her period. So, people who have weather-related headaches might — when the temperature's changing, or the barometric pressure's falling — be careful to make sure they get enough rest, to avoid red wine, to avoid their dietary triggers."

Even if nobody can control the weather, or explain yet why it would influence headaches, every extra insight into headache triggers can improve a lot of lives, says Mukamal, who counts himself among migraine sufferers. "Twenty percent of American women report migraines and five to 10 percent of men [do]," he says. "That's a lot of people."

Click Here To Check The Weather Channel's Aches and Pains index.
Get Answers To The Most Frequently Asked Questions About Migraines From The National Headache Foundation