Accessibility links
Bonnie 'Prince' Billy: Cinematic Americana A man of many monikers, the ever-prolific Will Oldham is set to release a new album as Bonnie "Prince" Billy. He recently visited WNYC's Soundcheck, where he impressed the staff with his musicality — and, it turns out, his knowledge of old Westerns.

You Can't Hurt Me Now

You can click here to listen to, and read, a review of Will Oldham's new CD, Beware. 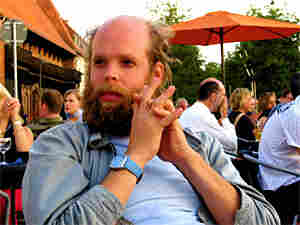 Since Soundcheck is a live program, one guest is often waiting in the wings while another guest finishes an interview. The guest waits in a small room with a few chairs and a view of our studio. It's a good place to chat with friends or tap out a message on an iPhone.

As a producer on the show, it's my job to interrupt whatever they're doing and politely but firmly push them into the studio for a live performance. The easygoing Will Oldham needed little such pushing when he came to Soundcheck in January to perform in his Bonnie "Prince" Billy guise. After I gave him the high sign, we walked into a tiny, soundproof hallway that leads directly into our studio.

The hallway is only a few feet wide and about seven feet long, with closed doors at either end. In such tight quarters, it's a little like riding in an elevator — quiet and a tad awkward. Of course, my passengers are often nervous about performing live on the radio.

I'll let you in on a secret: I try to break the ice every time with a joke. The same joke.

I admit it. It's a stupid joke. It's not even funny. But rodeo is a weird thing to bring up, and I like to think it sort of wipes the mental slate clean. Few artists have time to say, "Hey, what kind of radio show is this?" before I yank them inside the studio.

But Oldham actually wanted to chat about rodeo. He is, after all, a musician who has turned Americana inside out, creating beautiful songs along the way.

"Have you ever seen The Misfits?" he asked quietly, looking across his massive beard.

It was my turn to be the surprised occupant of that tiny chamber. "Like the old Glenn Danzig band?" I asked, thinking, "Why is he bringing up heavy-metal vampires at a time like this?"

"No," he replied. "The movie with Gable and Monroe. The Western. It's the last film both of them made." He paused. "Monty Clift didn't last long, either. It has some great rodeo scenes."

For someone who jokes about rodeo on a near-daily basis, I wouldn't know a good rodeo scene if it bucked me off its back. I quickly changed the subject to another Western, Butch Cassidy and the Sundance Kid. Twenty seconds later — an eternity in rodeo — Oldham was on the air, performing a song called "You Can't Hurt Me Now," two months before it was set to appear on his new album, Beware.

A few nights later, I watched The Misfits at home. It does, in fact, contain some great rodeo scenes. John Huston's film also has a brilliant script from Arthur Miller, heartbreaking performances from every star and one of the most striking final scenes I've ever watched.

It was fitting that the recommendation came from a striking artist like Will Oldham. Also, I've stopped making the rodeo joke.