Accessibility links
Wary Of Wall Street? Invest In A Dairy Farm Organic farmer Dante Hesse needs to raise about $700,000 to upgrade his dairy. When Hesse couldn't get a loan through usual channels, he turned to his customers for help. Though he's got no collateral or co-signers, some say they're ready to invest.

Listen
Wary Of Wall Street? Invest In A Dairy Farm 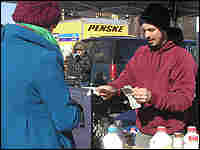 Dante Hesse sells much of his milk directly to customers in New York City. He also has accounts with a few retailers. Laura Conaway/NPR hide caption 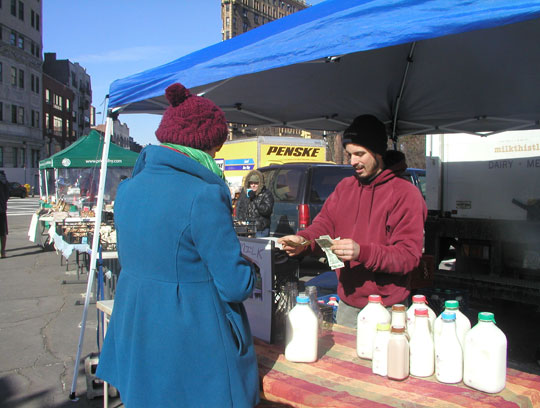 Dante Hesse sells much of his milk directly to customers in New York City. He also has accounts with a few retailers. 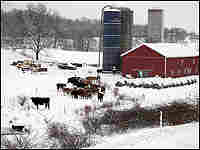 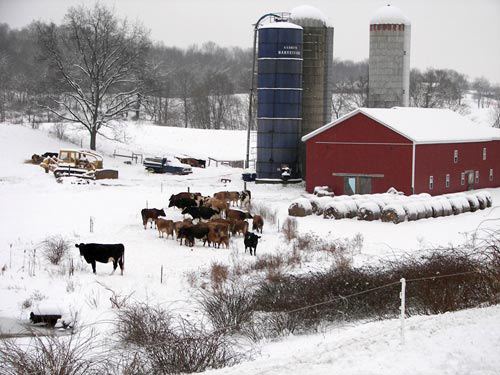 Dante Hesse runs a small organic dairy farm in Ghent, N.Y. Hesse lets his herd of 60 or so cows graze on open pasture. He avoids giving them growth hormones and antibiotics. Hesse says his cows might live a decade or more, and they stay productive longer than the average for more industrial farming.

A couple of days each week, Hesse makes the trip from his Milk Thistle farm to farmers markets in New York City. Even before he finishes setting up his stand, customers start lining up for his milk, at $5 a quart. Hesse says he could sell even more milk — plus butter and cheese — if he could just build a processing plant right in his barn.

For that, he needs to raise about $700,000 — a sum of money that has been hard to come by in the current recession and credit crisis. Hesse has a particularly hard time borrowing money because he has nothing to back up the loan. He rents his barn and his land. He's got no co-signers. Last fall, unable to get a loan through ordinary means, he turned to his customers and asked them for help.

"We feel pretty strongly at this point that there are a lot of people out there who are interested in helping, and the way the economy is now, one argument might be that it's a bad time to be doing something like this," Hesse says. "But I think the inverse is true, that it's actually a good time because people are scared of the stock market, and they know that food is a vital part of survival. And local food is going to become very important in the very near future."

Hesse is offering 6 percent interest for an unsecured loan of $1,000. His business plan taps into a pair of burgeoning movements — the first characterized by an interest in organic, locally grown food; the second by an environmental approach to economics.

That approach is championed by Woody Tasch, a venture capitalist and author of the new book Inquiries Into the Nature of Slow Money. Tasch argues that money is flying around the globe too fast. He rows hard against mainstream economics, which says growth is good and the marketplace knows best. "I've just had it with all of this so-called 'making-a-killing expertise,' which is actually killing the planet," he says. "I think one of the antidotes is daring to move to the other side of our brain, and kind of put down all that economic and fiduciary nonsense and just act like regular people."

Tasch and his Slow Money Alliance take their name and inspiration from the Slow Food movement, which started 20 ago in Italy. Tasch isn't arguing against all growth. Rather, he's saying that some as yet undefined portion of capital should be steered toward smaller, local farms and businesses that are friendly to the environment. His group aims to raise as much as $100 million this year, then let regional funds start investing in businesses they like.

The idea of investing in a farmer like Hesse, who's got no collateral to back up a loan, might seem overly risky to some. But one customer at the market stops to ask Hesse about the deal.

Josh Goldstein of Brooklyn says he and his wife are interested in lending money to Hesse. They've lost faith in the stock market, and are ready to put their faith instead in a business and product they can see — and taste.

"The milk, first of all, it's like no milk you've ever had," Goldstein says. "We've been looking to invest some money in local green companies. We just thought it looked like a good opportunity — somebody local, somebody we know, somebody we can trust."

For now, Hesse is putting the finishing touches on his plan to seek investments from his customers. He's also hoping he might get the backing of an outfit like the Slow Money Alliance. He knows it might take him a while to get where he's going. In this economy, he's almost got no choice but the slow road.

Excerpt: 'Inquiries Into The Nature Of Slow Money' 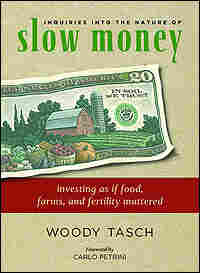 The following excerpt is the first chapter of Woody Tasch's Inquiries Into the Nature of Slow Money: Investing as if Food, Farms, and Fertility Mattered.

Every 250 years or so, it seems, we arrive at a threshold moment in the history of capital and culture.

In 1500, two men in Amsterdam stood on a bridge over a canal, designing the joint stock company, minimizing risk to capital, and galvanizing the flow of investment in exploration, conquest, and export. The outlines of the New World were as yet undefined and the notion of limits to growth unimaginable.

In 1750, two men in New Amsterdam stood under a tree on the cow path that would become Wall Street, designing a stock exchange that would create hitherto unknown degrees of financial liquidity and, so, galvanize the flow of capital in support of exploration, extraction, and manufacture. Corporations were small, continents were large, industrialization was incipient, the Prudent Man and the Invisible Hand about to enjoy their considerable time in the sun, and the notion that the resilience of natural systems had limits was about to suggest itself-but only briefly, and only to be swiftly discredited and debunked.

In 2000, we are entering a period of urgent postindustrial, post-Malthusian reassessment and reconnoitering. We find ourselves on a new threshold, signals of systemic unsustainability proliferating alongside those of ever accelerating capital markets and technological innovation. Consumerism and global markets are ascendant, carbon sinks are overloaded, and the idea of limits to growth calls for radical reconsideration.

It falls to us to undertake a new project of system design: the creation of new forms of intermediation that catalyze the transition from a commerce of extraction and consumption to a commerce of preservation and restoration.

Speed is one of the defining characteristics of our age. As much as in the Age of Ones and Zeros or the Age of Gigabytes and Megatons, we live in the Age of Hockey Sticks.

GDP growth driven by subdivisions and highways and Mustangs and 727s made sense in a pre-smog, pre-urban-blight, pre-sprawl world. Buy Low/Sell High made sense in a world that could not conceive of a $350 billion Wal-Mart, a $53 million Christmas bonus, a $400 million golden parachute, or a China that is building one coal-fired power plant a week and more roads in 2008 than it had in the preceding fifty years.

Now, a thousand billionaires and a billion thousandaires signal structural limits to the power of industrial finance. Close to four hundred parts per million of carbon in the atmosphere signals limits to the economics of maximum growth. The campaign to drag 1 or 2 percent of foundation assets back across the iron curtain between asset management and grant making signals the limits of the culture of Wealth Now/Philanthropy Later. And, most recently, the subprime mortgage collapse signals the limits of ever accelerating, ever more complex, derivative-driven financial markets.

Organized from "markets down" rather than from "the ground up," industrial finance is inherently limited in its ability to nurture the long-term health of community and bioregion. These limits are nowhere more apparent than in the food sector, where financial strategies optimizing the efficient use of capital have resulted in cheap chemical-laden food, depleted and eutrophied aquifers, millions of acres of GMO corn, trillions of food miles, widespread degradation of soil fertility, a dead zone in the Gulf of Mexico, and obesity epidemics side by side with persistent hunger.

"Food," as the poet Gary Snyder observed, "is the field in which we daily explore our harming of the world." It is also the field in which we daily explore the boundaries between investing and philanthropy. Using global markets as our guide, we choose commodity production over soil fertility, leaving the vast majority of sustainable-agriculture enterprises with little or no access to either investment capital or philanthropic support.

While organics grows at 20 percent per annum on its way past 3 percent of U.S. food-industry revenues, and Whole Foods' emergence as a Fortune 500 company heralds wider market acceptance of organics, the facts on the ground remain stark. Only 0.5 percent of U.S. farmland is organic. Only 0.1 percent-less than $50 million per annum-of U.S. foundation grants go to sustainable agriculture. Only 0.1 percent of the USDA's budget supports organics. Roughly the same order of magnitude of venture capital targets organics, and most of that goes to organic brands that have limited relevance to the health of local food systems.

The challenge of reintegrating social and environmental concerns into the financing of food mirrors similar processes underway in broader capital markets and philanthropic arenas.

Socially responsible investing, mission-related and program-related investing by foundations, venture philanthropy, social entrepreneurship, local economies, consumer demand for organics and green products-these are the first stages of a more profound fiduciary realignment. Some of these initiatives remain incremental and ambiguity-laden. Others are indicators of more fundamental, tectonic shifts along the boundaries of for-profit and nonprofit, shareholder and stakeholder, global investor and local citizen.

This process of economic and cultural transformation calls for a new prudence, a new urgency, a new vision of capital markets designed to usher in the age of restorative economics, integrating into the theory of fiduciary responsibility and the practice of asset management principles of carrying capacity, care of the commons, sense of place, cultural and biological diversity, and nonviolence.

One of the principal measures of our success will be the extent to which we have catalyzed substantial new capital flows to enterprises that create economic opportunity while respecting, protecting, and promoting the fertility of the soil.

This excerpt from Woody Tasch's Inquiries into the Nature of Slow Money: Investing as if Food, Farms, and Fertility Mattered, is printed with permission from its publisher, Chelsea Green. 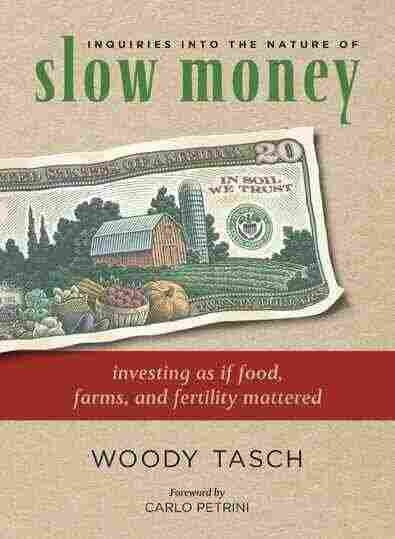 Inquiries into the Nature of Slow Money

Investing as if Food, Farms, and Fertility Mattered

Title
Inquiries into the Nature of Slow Money
Subtitle
Investing as if Food, Farms, and Fertility Mattered
Author
Woody Tasch