Accessibility links
Prelude to an Epic: Wagner's 'Das Rheingold' Das Rheingold, the "Preliminary Evening" to Wagner's epic Ring cycle, is a 160-minute spectacle that flies by in a flash, introducing vivid worlds where gods, giants and dwarves all vie for ultimate power.

When Wotan forces Alberich to give up his treasure, Alberich curses the all-powerful Ring, to bring misfortune on anyone who possesses it. In this recording, "Alberich's Curse" is sung by baritone Gustav Neidlinger.

At the end of Das Rheingold, Wotan leads the gods across a rainbow bridge to their gleaming new home, in the sequence known as "The Entry of the Gods Into Valhalla." It's played here by the Berlin Philharmonic, with conductor Klaus Tennstedt.

Entry of the Gods into Valhalla

There were a few famous 19th-century musicians who seem to have been competing for the title of "most long-winded composer." When it comes to orchestral music, for example, it's a tossup between Gustav Mahler and Anton Bruckner, who both wrote single symphonies lasting well over an hour. 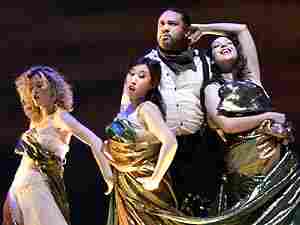 With opera, though, there's one composer who has the field all to himself: Richard Wagner. His operas Die Meistersinger and Parsifal are both among the longest of all time. But those two are pipsqueaks when compared to his epic, The Ring of the Nibelungen — a cycle lasting some 16 hours in all.

It's true that Wagner's Ring is actually four dramas, not just one. But together, they tell a single, continuous story — in a form Wagner called "music drama." And that one story takes four evenings to perform.

Still, the individual works of the Ring do stand quite nicely on their own. And the opening drama, Das Rheingold, is actually one of the most concise operas Wagner ever composed. At about two and a half hours, it's easily the shortest drama in the cycle — and it can seem even shorter than it really is. Das Rheingold is a 160-minute spectacle that flies by in a flash, introducing vivid new worlds where gods, giants and dwarves all vie for ultimate power. But while the story is surely compelling, the whole thing does take place in just one act — with no intermissions. So, if you plan on listening to it all in one go, you might think about packing a lunch.

On World of Opera, host Lisa Simeone presents Das Rheingold — which the composer called the "Preliminary Evening" of his Ring cycle — in a performance from the Washington National Opera. It's the first installment in what the company calls "An American Ring," an ambitious and inventive production of Wagner's complete cycle. The Washington production of Das Rheingold stars baritone Robert Hale as the god Wotan, and also features a vivid performance by baritone Gordon Hawkins as Alberich, the vengeful Nibelung whose passion and anger sets the entire story of the Ring in motion.

The Story of 'Das Rheingold' 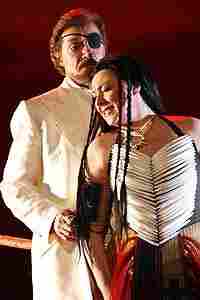 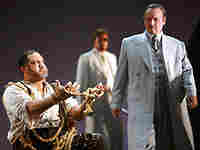 The single act of Das Rheingold begins in the depths of the Rhine river. The entire Ring cycle finishes — four operas and more than 15 hours later — on the banks of the same river. As the orchestral prelude ends, the three Rhinemaidens are playing among the rocks of the riverbed. Alberich appears from below. He's one of the Nibelungs, a race of dwarves. Alberich is smitten by the Rhinemaidens, and tries to join in their play. But they find him repulsive. They lead him on, tease him, and then reject him, leaving him frustrated and angry.

Then he sees a strange light in the water. It's a cache of gold — the precious Rheingold. The maidens tell Alberich that this gold has magic powers. Anyone who owns it, and can forge a ring from it, will rule the world. But there's a catch. To possess the gold, and forge the ring, one must first renounce love. The Rhinemaidens feel safe telling Alberich this. After all, he's obviously in love with them, and who could renounce that? But the dwarf is so angry at their teasing that he decides to pay them back. He renounces love, steals the gold, and escapes back into the depths. As the Rhinemaidens break into a desperate song, with Alberich laughing in the background, the scene changes.

We move up from the river's depths, from water into clouds, and then to a sunny place at the top of a mountain. Wotan, the chief of the gods, is sleeping. His wife, Fricka, wakes him up, and Wotan admires a castle standing on a peak across the Rhine valley. The castle is Valhalla, the gods' new home, built for them by two giants — Fafner and Fasolt. In exchange, Wotan has told the giants they can have Freia, Fricka's sister, who is also the Goddess of Youth and Beauty. Now, the giants come to claim their reward.

But Wotan never really intended to give Freia to the giants. Instead, his plan is to enlist Loge, the crafty God of Fire, to find a way out of the deal. Loge figures the only solution is to offer the Giants something even more valuable than Freia. Loge has heard that Alberich has stolen the Rheingold, with its powerful magic. The giants agree that if Wotan can somehow get the gold from Alberich, they'll take that instead of Freia. But for now, they'll keep her as ransom.

With Freia gone, even temporarily, the gods are in big trouble. Without the apples of youth that Freia provides, the gods grow weak and may even die. Again, the gods turn to Loge, hoping he find a way out of their current mess.

Though Loge is called the God of Fire, he's actually half human — and when it comes to the real, full-blooded gods, he holds a bit of a grudge. So Loge doesn't hesitate to take Wotan on the dangerous trip that sets the ultimate downfall of the gods in motion.

Loge and Wotan travel through a cleft in the mountains and down into the underworld, where the Nibelungs live, enslaved by Alberich. Alberich has already forged the powerful ring from the Rheingold, and he's also made the Tarnhelm, a magic helmet that enables him to change shape. But when Alberich shows off this power by turning himself into a toad, Wotan catches him and takes the Tarnhelm.

Alberich is dragged off to the mountaintop. In exchange for his freedom he orders the Nibelungs to bring up the Rheingold. He wants to keep the ring, and the Tarnhelm. When Wotan refuses him, Alberich turns the ring over — but he also puts a deadly curse on anyone who possesses it.

After Wotan and Loge send Alberich packing, the two giants return, bringing Freia with them. They'll give her back, they say, but only for a stack of gold big enough to completely hide her from view. All the gold, including the Tarnhelm — everything but the ring — is stacked up. But Fafner can still see Freia's eyes through a slit in the pile, and he orders Wotan to give up the ring, as well. Wotan hesitates, but when the earth goddess Erda warns Wotan that he'd better comply, the giants get the fateful ring.

Almost immediately, Alberich's curse goes into action. The giants start to quarrel over the gold, and the stunned gods watch as Fafner bludgeons Fasolt to death and drags the body off, along with his newly won treasure.

Wotan celebrates Freia's return by leading the gods across a shimmering rainbow bridge to their new home, Valhalla. But below, in the river, the Rhinemaidens lament the loss of their precious gold.