Accessibility links
Raucous Iraqi Parliament Makes Little Progress Iraq's parliament is increasingly hamstrung by sectarian rivalries, with many shouting matches and many lawmakers failing to show up. None of the legislation seen as crucial for national reconciliation has yet to be debated on the floor. 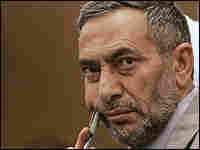 Shouting matches are commonplace, and there are many absences. Key legislation has yet to be debated on the floor. Ordinary Iraqis are fed up with the lawmakers. And U.S. officials are increasingly concerned that the legislature will fail to take action on moves aimed at ending sectarian violence.

In Parliament last week, Shiite lawmaker Shatha al-Mousawi was complaining bitterly about her recent visit with displaced Shiites from Diyala province. They were expelled from their homes because of sectarian violence.

It's intolerable that the government allows this bloodshed to happen, she said, demanding that the prime minister and other top officials be summoned to Parliament to respond.

The speaker of Parliament reacted to her emotional diatribe with laughter.

Mahmoud al-Mashhadani, a Sunni, said he was laughing to conceal his pain at the situation in which the Shiites of Diyala found themselves. But Shiite parliamentarians openly scolded him for his seemingly coldhearted reaction, and he in turn began attacking them.

"Three-quarters of those sitting here are responsible for the displacements and the sectarian killings, and now you're calling yourselves patriots?" he thundered.

Amid the shouting that ensued, Mashhadani pounded his gavel and declared the session adjourned. He did not consult his two deputies before making the decision. Kurdish lawmaker Mahmoud Othman says Mashhadani then got into a physical confrontation with a fellow parliamentarian from his own party.

Critics inside and outside parliament — Shiite and Sunni — blame Mashhadani for the legislature's failure to move on any critical issue.

Othman says Mashhadani and his deputies allow chaos to rule the house.

"They should have more experience in this job," Othman said. "They should know how to control the session."

No major issue has yet made it to the parliament floor, from the draft oil law to the review of the ban on former members of Saddam Hussein's Baath party to amendments to the constitution.

Procedure calls for a first reading of each bill, like in most other parliaments around the world, and that has yet to happen here.

It's unlikely the bills will be debated before Iraqi lawmakers break for their two-month summer vacation in June.

The prospect of such a long holiday in the midst of political crisis, both here and in Washington, has infuriated U.S. officials and politicians. But Mahmoud Othman says Iraqi lawmakers are already taking off more time than members of the U.S. Congress know about.

"Every month we work two weeks," Othman said. "That's another point people should know about ... we are working half the time. So it's two-to-three hours a day, two weeks a month and then there is a holiday. So it's sort of a disaster."

Lawmaker Shatha al-Moussawi says U.S. objections to the vacation schedule here have only made matters worse, saying it sends a message that Iraqis "don't have any control" of their own country and "receive orders from America."

In the streets of Baghdad, the Iraqi Parliament's reputation is at rock bottom.

"Our parliament is a failure, because they force us to accept the least of everything," says Ahmed Dawood, a short-order cook.

Wweating as he flips hamburgers on a grill, Dawood says the lawmakers are only out for what they can get. And he prays for the day they've had enough, so ordinary Iraqis can bring in others who really will help the people.