Accessibility links
Dental Credit Cards Drill A Hole In Some Wallets It's hard to get credit these days, except when it comes to fixing your teeth. Across the country, dental credit cards are becoming more popular for those who don't have insurance or enough money to pay for a procedure. But a growing number of critics warn the cards cause more problems than they solve. 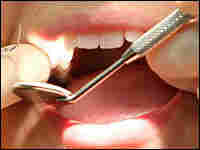 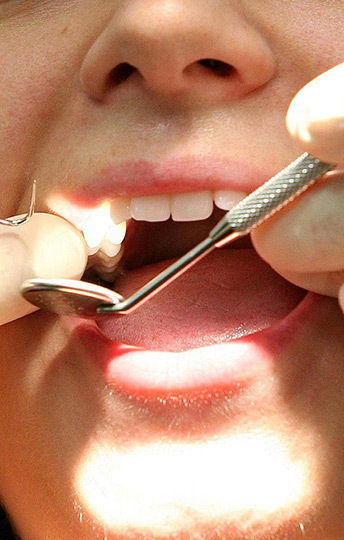 It's hard to get credit these days, except when it comes to fixing your teeth. Across the country, dental credit cards are becoming more popular for those who don't have insurance or enough money to pay for a procedure. But a growing number of critics warn the cards cause more problems than they solve.

Joseph Lopez, 75, lives in a Sacramento trailer park. Last year, his wife needed a bridge for her teeth. It had a $3,000 price tag and Lopez didn't have dental insurance. So, he says, he got a special kind of loan.

"They told me I would not have any interest for two years," Lopez says, but when the bill came, the treatment hadn't been completed. And it was for $5,000 — $2,000 more than he agreed to.

He claims he never got an official application outlining the terms and conditions, so it wasn't clear whether he was agreeing to a payment plan with his dentist or getting a credit card.

In fact, he had been enrolled with CareCredit — a card designed to pay for medical costs. He says the company threatened to sue him if he didn't pay.

"You figure they are going to take me to court, my house, my car, my bank account," Lopez says.

Lopez got help from a lawyer, and eventually CareCredit backed off. His lawyer then shared his story with California lawmakers, testifying before a state Senate committee in support of a bill to regulate dental credit cards.

Lopez's story is becoming all too familiar, says Elizabeth Landsberg, an attorney with the Western Center on Law and Poverty.

Landsberg says states are just starting to pay attention to this problem, and California's ahead of the curve. That state is now tracking complaints, and this year saw nearly three dozen, she says. Most of these were from the poor, the elderly and non-English speakers.

Landsberg accuses CareCredit of predatory lending practices. She says people can get broadsided by a retroactive interest rate of as much as 30 percent for a late payment.

"People are being convinced to take on more credit than they can afford," she says. "We have people who are living on a fixed income of $1,000 a month who are being signed up for $6,000 in credit. There's no way they can make those payments."

CareCredit spokeswoman Cristy Williams says the company is not involved in predatory lending practices. And, she says, the majority of its customers are happy. Right now, Williams says CareCredit has an all-time high of 100,000 providers nationwide offering the card. About half are in dental care, but plastic surgeons and veterinarians use the card, too.

"Well, I don't like credit cards in general, but I don't know if there's a better option," he says.

That was the case for one of Lott's patients, Angie Gerritsen. She says she needed extensive work — $20,000 worth.

"I was having a lot of pain, a lot of infection, and I probably would've ended up losing a lot of my teeth if it wasn't because of CareCredit," she says.

The credit cards can help the dentist, too. Lott says he gets the money for procedures up front and in full. And if a patient defaults on payment, CareCredit deals with collection.

The California Dental Association, or CDA, endorses the card, as does the American Dental Association. Both organizations get paid for those endorsements. Mark Rukavina from the health care advocacy group The Access Project says using credit to pay for medical care is bad. But he says undisclosed endorsement payments are even worse.

"The blurring of medical provider and financial services provider is problematic," Rukavina says. "But when you have a financial stake in the marketing of these cards to patients, it's even more perilous."

Cathy Mudge, the CDA's chief administrative officer, acknowledges that the association does not publicly disclose the payment but says it shouldn't have to.

"If we do endorse a product, we believe that we've done the research and analysis to assure that it's an excellent product for both the dentist and the patient," Mudge says.

But Rukavina says, "Unless they're at risk of losing life or limb, we would advise people not to put medical expenses on their credit cards."

Rukavina says setting up a payment plan directly with the dentist is a better option. As for the bigger picture, last year Gov. Arnold Schwarzenegger vetoed that California bill to regulate dental credit cards. Advocates are sponsoring similar legislation again this session.