Accessibility links
United Auto Workers Support Chrysler Sale Cerberus Capital Management's deal to buy a substantial stake in Chrysler for $7.4-billion has found unusual support from the United Auto Workers. One possible reason is that the UAW might get control of the pension fund.

Private equity firms and unions are usually at odds. While private equity is generally looking to cut costs by cutting jobs and benefits, unions are busy trying to protect them.

So, the United Auto Workers' endorsement of the sale of Chrysler to private equity firm Cerberus has come as a surprise to many.

Until recently, UAW head Ron Gettelfinger was no fan of private equity firms. Earlier this year, he warned that if such a firm took over Chrysler it would "strip and flip" the automaker, selling off its assets and destroy the company.

But by Monday, when the Chrysler-Cerberus deal was announced, Gettelfinger was striking a tone of acceptance.

"You're dealt a hand," he said at a news conference. "We maintain ... today that we would like the Chrysler group to stay under the umbrella of Chrysler, but that's not going to happen."

Instead, Gettlelfinger said he received commitments from Cerberus and from officials at Daimler-Benz, but he wouldn't elaborate.

"Many things have already been put out in writing within the corporation in different forms," Gettelfinger said.

"Are there going to be bumps in the road? Absolutely," he added.

Chrysler CEO Tom Lasorda said the company and Cerberus have no major plans to cut jobs, but some in the labor community seemed less than convinced.

Buzz Hargrove runs the Canadian Auto Workers, which represents 10,000 workers at Chrysler factories. He said he has yet to speak with Cerberus representatives and remains skeptical.

"Usually the biggest way to cut costs is to cut people and we're going to fight like hell against that," Hargrove said.

But Cerberus may be looking for another way to control costs. As part of the deal, the equity firm agreed to take on Chrysler's more than $18 billion in pension and health care obligations.

That's a staggering amount of money — far more, in fact, than the entire company is worth.

It also puts Chrysler at a huge disadvantage against foreign competitors, such as Toyota.

Sean McAlinden, is an auto analyst in Ann Arbor, MI. He thinks Cerberus may ask the union to cut retiree benefits.

"It's a deal that has to be done to make the company viable, because I really don't see how Cerberus could turn this thing over and make a nice return on it," McAlinden said. "Why would you want to buy a share in a company that — when you consider these liabilities — has no net value?"

And what could the union get in return?

First, it might get control of the pension fund, which would move outside the company and be protected if Chrysler ever went belly up. Second, Cerberus has agreed to invest $5 billion dollars in the company that could help save jobs — the union's top priority.

"It's possible in this deal that every Chrysler plant gets new investment," McAlinden said.

Until details of the plan are heard from the UAW and Cerberus, it's hard to know what kind of arrangement the two might work out.

The union, however, begins contract negotiations this summer with all three Detroit automakers, so it has to be careful what kind of a deal it strikes with Chrysler. Ford and General Motors are likely to want the same thing.

Q&A: Under the Hood of the Chrysler Deal 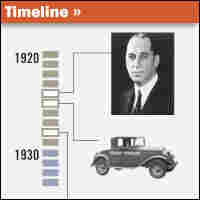 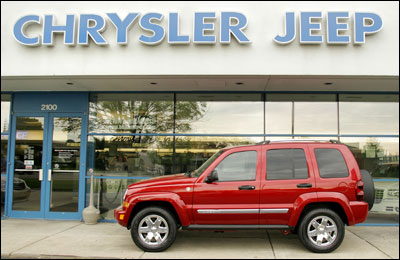 Germany-based DaimlerChrysler will soon lose the second half of its name. The company announced Monday that it is selling 80 percent of the Chrysler Group to a private equity fund for $7.4 billion. The new owner, Cerberus Capital Management, inherits an automobile company that is losing money and laying off workers. The deal essentially reverses a much-touted 1998 merger of the two automakers. Here, a look under the hood at the sale:

What is Cerberus? I've never heard of it.

It is a private-equity firm — named after the three-headed dog that guarded the gates of hell in Greek mythology. The firm, founded in 1992, currently owns about 50 companies, ranging from Air Canada to Formica Corp. Of late, it has taken an interest in the auto industry. It owns the car-rental firms National and Alamo and has a controlling interest in General Motors' financing arm. Former Treasury Secretary John Snow is Cerberus' chairman.

Is this the biggest takeover by a private-equity firm?

No, but it is certainly one of the most high profile. For the first time, a U.S. automaker — and American icon — is in the hands of a private-equity firm, not accountable to shareholders.

What happened to the much-heralded merger between Daimler-Benz and Chrysler a decade ago?

It never stuck. At the time, it was called a "merger of equals" and a "marriage made in heaven." As it turns out, it was a less-than-ideal union --- with Chrysler's profit line after the merger resembling the path of a roller-coaster. Dieter Zetsche, the chief executive of DaimlerChrysler, admitted as much at a news conference Monday in Germany. "We obviously overestimated the potential of synergies," he said.

Critics of the merger say it failed, in part, because Daimler was reluctant to share its high-end technology with the more down-market Chrysler products. "Daimler didn't want their Mercedes owners looking under the hood of their car and seeing the same thing under the hood of a Dodge," says David Healy, an analyst with Burnham Securities.

Under pressure from angry shareholders, Daimler was eager to unload Chrysler — even at a fire-sale price — and rid itself of what had become a financial albatross. The way the deal is structured, Daimler is actually paying to unload Chrysler.

Will Daimler play any role in Chrysler's future?

Yes. Daimler will retain a nearly 20 percent share in the new Chrysler, and some joint research projects will continue.

How poorly is Chrysler doing as a company?

Very poorly. It posted an operating loss of $1.5 billion last year, closed one plant and recently announced 13,000 layoffs. It is saddled with high labor costs, dwindling sales and an excessive number of dealerships. And Chrysler, like other U.S. automakers, has been slow to introduce fuel-efficient hybrid cars, like the popular Toyota Prius.

What does the deal mean for Chrysler's 80,000 employees?

That's not clear. Traditionally, private-equity firms that buy a company like Chrysler reduce costs drastically — often through layoffs — then sell the company at a profit. That's why Chrysler President Tom LaSorda was quick to reassure employees by saying that Cerberus has "a long-term commitment to Chrysler's growth and success." Cerberus Chairman John Snow argues that a private firm, free of shareholders hunger for quarterly profits, can actually take a more long-term view. "We don't think about the next quarter. We don't think about what analysts have to say about us," he said. Many analysts, though, say future layoffs at Chrysler are inevitable, given the amount of cash the company is hemorrhaging.

How do the labor unions feel about the sale?

They support it, which is surprising because just a few weeks ago, the head of the biggest union, the United Auto Workers, publicly opposed the sale of Chrysler to a private-equity firm. UAW chief Ron Gettelfinger said he feared such a firm would "strip and flip" the company to turn a quick profit. It's not clear why he had a change of heart. The deal, though, may represent the best of several bad options for the company — and the union. On Monday, Gettlefinger said the union had received some "commitments" from Cerberus, but he didn't specify what they were. In any event, the tough decisions won't be made until this summer, when management and the union begin negotiating a new four-year contract.

Cerberus does. And they are costly: around $18 billion or more, according to some estimates.

What does the deal mean for Chrysler consumers?

Not much, at least in the short term. Warranties, for instance, are protected under law, even if the company is sold. In the medium term, the new owners may launch some innovative new models in hopes of winning back market share.