Accessibility links
Pakistan's Tribal Areas Provide Haven For Militants In recent months, the U.S. has intensified attacks on Taliban and al-Qaida militants in northwest Pakistan along the Afghan border. Effectively outside the Pakistani government's control, the remote area has become a militant stronghold and a major concern for the U.S. military. 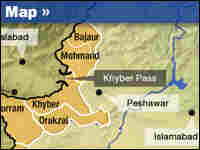 Pakistan's Federally Administered Tribal areas, or FATA, cover more than 10,000 square miles of rugged landscape that sweeps down western Pakistan, hugging the border with Afghanistan. It is home to the Pashtun people and a haven for Taliban and al-Qaida militants. Mor Vimmer/NPR hide caption 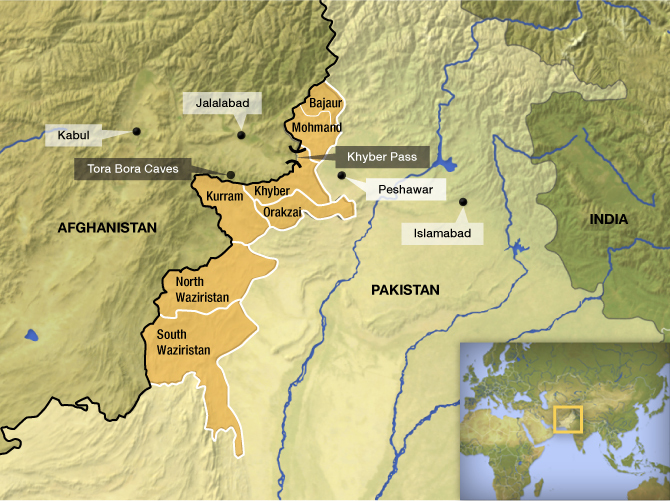 Pakistan's Federally Administered Tribal areas, or FATA, cover more than 10,000 square miles of rugged landscape that sweeps down western Pakistan, hugging the border with Afghanistan. It is home to the Pashtun people and a haven for Taliban and al-Qaida militants. 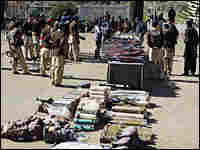 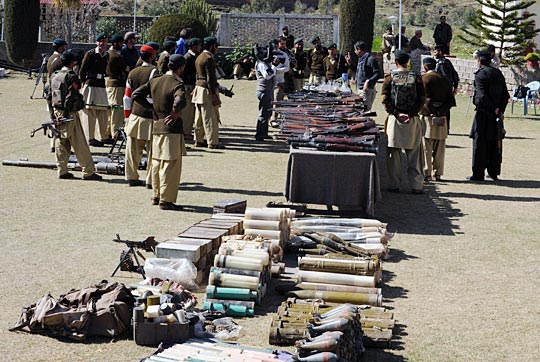 NPR's Soraya Sarhaddi Nelson spent two weeks traveling with the U.S. military to remote and difficult spots along the long border between Afghanistan and Pakistan, reporting on efforts on the Afghan side to secure this critical frontier.

Over the past several months, the U.S. has intensified a campaign of aerial attacks on Taliban and al-Qaida militants in northwest Pakistan.

The missile strikes are launched from unmanned aircraft, known as drones, in the region along the border with Afghanistan, which is effectively outside the control of the Pakistani government. Not surprisingly, this militant stronghold has become a major concern for the U.S. military.

The area — known as the Federally Administered Tribal Areas, or FATA — covers more than 10,000 square miles of rugged landscape that sweeps down western Pakistan, hugging the border with Afghanistan.

It is home to the Pashtun people: An estimated 13 million Pashtuns live on the Pakistani side of the border and a comparable number live in Afghanistan. The Pashtuns were officially split up when the British drew the border between the two countries, known as the Durand line, in the late 1800s. The tribal areas have a long history of violence and resistance to outsiders.

"People say that the only time the Pashtun is at peace is when he's at war," says Thomas Johnson, director of the Program for Conflict and Culture Studies at the Naval Postgraduate School. "But I think, outside of certain types of interventions, the Pashtuns have been passive farmers. It's just they don't like people interdicting in their independence and their affairs. It always has been difficult for another power to come in and to rule these guys."

That's something armies over the centuries have found out, including the British, who came up against the Pashtuns as they tried to extend their colonial empire beyond India's western border.

"They fought in those hill for years and they just couldn't control them," says Selig Harrison, the director of the Asia program at the Center for International Policy in Washington.

"You go up in there, and you see these hills and the ravines and the valleys, and there is really no place I'm aware of on the face of the earth that's quite as geographically, topographically difficult to operate in from a military point of view."

Harrison says after years of fighting, the British and the Pashtuns came to an agreement, which gave the Pashtuns some autonomy.

"They reached a truce," Harrison says. "The tribes left [the British] alone, stayed up in their areas, and the British didn't try to conquer them and administer them."

When Pakistan was born in 1947, the new government decided to keep that agreement with the Pashtuns. It meant that Pakistan's central government had no major problems with the Pashtun, but it also had no real control over the tribal areas. The system worked relatively well until the terrorist attacks on Sept. 11, 2001.

After the U.S. military invaded Afghanistan in late 2001, fleeing Taliban and al-Qaida militants poured across the border into Pakistan's tribal area. Johnson says al-Qaida understood the Pashtuns and was able to integrate into their community.

The way of the Pashtun is called Pashtunwali. The code includes notions such as hospitality and giving refuge to strangers and people on the run, which Johnson says Osama bin Laden and al-Qaida were well aware of and have taken advantage of over the years.

The U.S. pressured the Pakistani army to push the Islamist militants out of the tribal areas. The Pakistani government says that more than 100,000 soldiers have been deployed in the area at one time or another over the past few years but, in many places, they have not gained control and have resorted to cutting peace deals.

That has allowed the militants to grow in strength and numbers, and build up cross-border networks in Afghanistan. Stephen Tanner, the author of Afghanistan: A Military History from Alexander the Great to the Fall of the Taliban, says this is creating a huge problem for U.S. and NATO forces there.

"Those people come back and forth, and our soldiers try to fight them off, but there is no way to block those mountain passes," he says.

Tanner says that the Taliban has had huge success in the past few summers of simply sending fighters over from Pakistan along with huge amounts of armaments.

"And then, when the going gets rough or winter comes, they go back to FATA," he says.

Since last August, the U.S. has been using Pakistani airspace to launch missile strikes on targets in the tribal areas. There have been more than 30 strikes since last summer. The U.S. will not publicly acknowledge the use of drones, but intelligence agencies say they have been effective against al-Qaida and the Taliban.

But Tanner says the cost has been too high because many innocent Pashtun have also died in the attacks.

"It's just aggravating the whole situation and it's uniting [the Pashtuns] in a national cause against us," Tanner says, noting that this is one reason why the Taliban has grown so strong recently.

"It's not just a group of fanatics any more, it's spreading throughout the entire Pashtun people," he says.

Yet, despite complaints by the Pakistani government, there is no indication the U.S. is planning to reduce its use of drones in tribal areas.