Accessibility links
In One-Man Show, Kirk Douglas Recounts Life At 92, film legend Kirk Douglas has returned to live theater for a one-man show that's a biography of his life and career. The last performance is Sunday at, fittingly enough, the Kirk Douglas Theatre in Culver City, Calif. 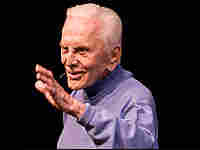 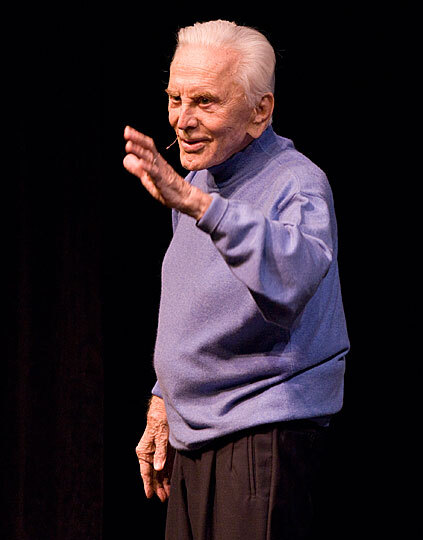 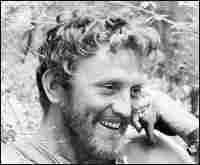 Douglas, shown here on the set of Spartacus in 1960, has acted in nearly 100 films. AFP/Getty Images hide caption 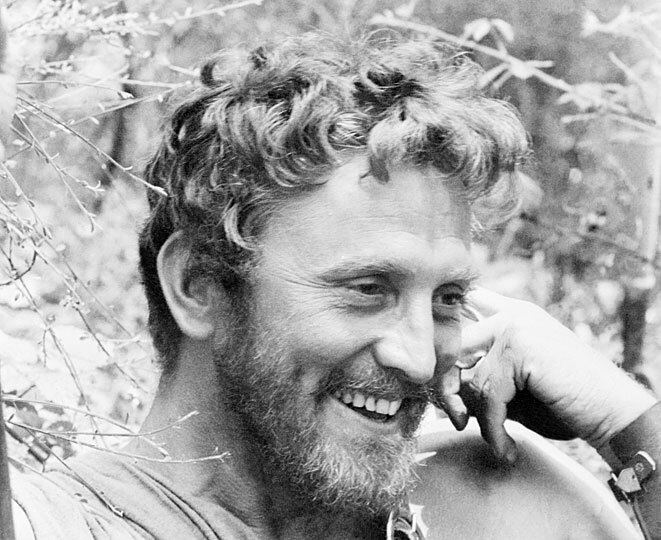 Kirk Douglas has shared the most memorable moments of his life with the readers of his several autobiographies. But since you can't hear readers laugh and applaud, he's now telling his stories in a live stage show at a theater named after him in Culver City, Calif.

It's called Before I Forget, but the 92 year-old actor doesn't seem to have forgotten much.

Douglas has a slight hitch in his step as he moves around the stage. Maybe it's from the two knee replacements or the debilitating injuries from the 1991 helicopter crash or the 1995 stroke that impaired his speech.

"When you have a stroke, you must talk slowly to be understood," he says. "And I've discovered when I talk slowly, people listen. They think I'm going to say something important."

Douglas' most important memories fill this nearly 90-minute show. Many of the stories are inensely personal and go back to his earliest days.

Douglas was born Issur Danielovitch in Amsterdam, N.Y. His Russian immigrant father sold rags from a horse-drawn cart. Other than that, the old man's main activities seemed to consist of going to the corner saloon and ignoring his son. When Douglas' mother and six sisters found a better place to live, his father refused to move with them.

"I wanted to be with Pa," Douglas says. "I kept looking at him, waiting for him to say, 'Issur, don't go, don't go.' He said nothing and went in the house."

But his father did attend his first acting gig, a kindergarten play.

"After the show, not a word was said. He bought me an ice cream cone. That ice cream cone was my Oscar," he says. "From that day on, I was determined to be an actor."

That determination brought Douglas to acting school in New York City, small parts on Broadway and finally to Hollywood. His breakout role came in the 1949 movie Champion, in which Douglas played the ruthless, ambitious boxer Midge Kelly.

Douglas was nominated for an Oscar for that role, one of three nominations during his career. But the only statuette he received was an honorary one, presented in 1996 by director Steven Spielberg.

"He has done nearly everything on film," Spielberg said at the time. "He has directed, he's produced and in the process, he's helped to hammer the blacklist to pieces."

In 1960, Douglas was one of the first producers to give a blacklisted writer screen credit when he acknowledged Dalton Trumbo for Spartacus, a film about the leader of an ancient Roman slave rebellion.

Douglas' stage show touches on a bit of everything: his deepening spirituality, for example, and his considerable role as a philanthropist, which included rehabilitating the theater in which he is performing.

But the show finally comes back to the topic of fathers and sons. Douglas had four sons. One of them, Eric, died of an overdose five years ago. There's footage of Douglas at Eric's grave, one of several filmed interludes that give the elderly actor a chance to sit down and rest during the performance. He also shows a clip from an HBO documentary about his relationship with his most famous son, Michael.

He asks Michael Douglas: "Was I a good father?"

After a pause, his son replies: "You have ultimately been a great father."

That pause, Douglas tells the audience, was all he heard. But there were no awkward pauses during this performance, just uncritical adoration and a long standing ovation at the end. As Douglas stood there, soaking it up, Michael walked out on stage and handed his dad an ice cream cone.