Accessibility links
Some Accuse Mexican Army Of Abuse In Juarez Thousands of troops have taken over control of Cuidad Juarez in an effort to win back the border city's streets from violent drug cartels. The surge in troops has reduced the number of drug-related executions, officials say. But human rights groups say soldiers are abusing detainees. 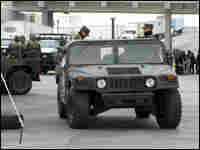 Thousands of Mexican soldiers have been sent to Ciudad Juarez in an effort to stop drug-related violence in the city. Jason Beaubien/NPR hide caption 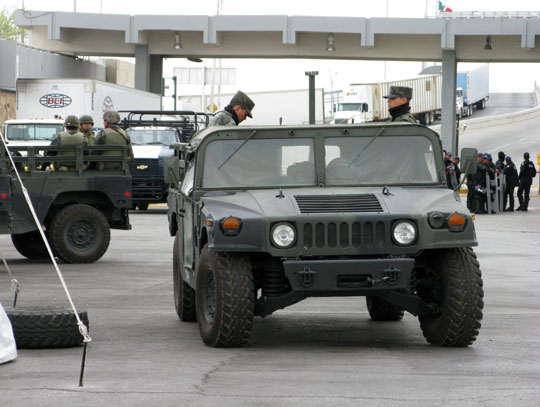 Thousands of Mexican soldiers have been sent to Ciudad Juarez in an effort to stop drug-related violence in the city.

In the Mexican border city of Juarez, thousands of army troops have taken over control of the local police force in an effort to win back the city's streets from violent drug cartels.

Local officials say the surge over the last two weeks has dramatically reduced the number of drug-related executions. But human rights groups say the military has been abusing detainees suspected of having ties to organized crime.

The Scene On The Border

As you come over the Bridge of the Americas from El Paso, Texas, into Juarez, Mexican soldiers with automatic weapons man a security checkpoint. They flag down SUVs and rummage through the vehicles looking for drugs, guns and money.

The army is now in charge of security in Mexico's most violent city.

It patrols the streets, runs the police department and oversees the jails.

Juarez Mayor Jose Reyes Ferriz says this is not martial law. He calls it a collaboration between the army and the city.

"We have to work to implement it, have to get many things straightened out," he says. "But at the end of the day, it's going to be a very helpful way to get crime down in our city,"

More than 2,000 people have died in Juarez since the beginning of 2008 as two of the nation's most powerful drug cartels battle for control of smuggling routes into El Paso. The gangs have gunned down their rivals, police officers and prosecutors in broad daylight.

While the thousands of additional troops haven't eliminated executions entirely, the murder tally has fallen from about 10 a day in February to only one or two a day since the extra soldiers arrived.

But Gustavo de la Rosa Hickerson, the ombudsman for the Chihuahua State Human Rights Commission, says the military shouldn't be in charge of security in Juarez. And he says the first wave of soldiers who arrived a year ago have tortured and even killed criminal suspects.

"We have registered 160 cases of abuse committed by the military here in Ciudad Juarez," Hickerson says. "And the majority of those cases were of torture."

Hickerson says that when the soldiers arrived more than a year ago, the new troops tried to quickly gather intelligence on the local cartels by beating information out of suspects.

"Abu Ghraib would be a kindergarten compared to the military camp here in Ciudad Juarez," he said, referring to the notorious U.S. military prison in Iraq.

A used car dealer who doesn't want his name used out of fear for his safety says he was held naked, blindfolded and handcuffed at the base for four days late last year. He says he was beaten along with dozens of other people who were being detained in a building there. He says the soldiers demanded that they confess to working for the drug cartels.

He fled to El Paso as soon as they let him go.

He says at 4 a.m. or 5 a.m. on his first day of detention, someone named El Tigre, or the Tiger, took over the interrogation and pulled a plastic bag tight over his head.

The car dealer says he was arrested after selling a car to two men from out of town who the army claimed were cartel hit men. When he insisted that he was just a businessman, he says, the soldiers threw him naked, handcuffed and soaked in water into a cold storage freezer. Other detainees, he says, were being shocked with electricity.

Hickerson at the Human Rights Commission says this man's account of the military interrogations matches the stories of other detainees.