Accessibility links
Marianne Faithfull Expresses Herself Faithfull's latest album, Easy Come, Easy Go, covers more ground than ever before. The veteran singer interprets songs by Randy Newman, The Decemberists, Dolly Parton and many others. To her, recording a cover is more about expressing the song than trying to emulate the original.

In Germany Before the War 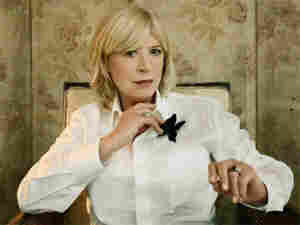 In a 2005 interview with NPR's Scott Simon, Marianne Faithfull talked about being thrust onto the music scene in the early '60s, at the age of 17. She was munching on hors d'oeuvres at a party and was approached by Rolling Stones manager Andrew Loog Oldham.

Faithfull recalled the story, in which Oldham asked, "'Can you sing?' I said, 'Mm, mm, I can. Mm. Mm.' And I think about a week later, I got a telegram from Andrew saying, 'Be at Olympic Studios at 2 o'clock at such-and-such address, London.' And that's where we did 'As Tears Go By.' "

"As Tears Go By," written for Faithfull by Mick Jagger and Keith Richards, was later recorded by The Rolling Stones. Faithfull had a famous and long-running relationship with Jagger, scraped bottom with a heroin addiction and eventually pulled herself back up over the years to record critically acclaimed albums, including Broken English in 1979. In 1987, she released a triumphant collection of covers called Strange Weather.

Before she released Before the Poison in 2005, Faithfull told NPR that she had set out to make the "darkest Marianne Faithfull album that's ever been made." By contrast, Easy Come, Easy Go is a different record.

"I know some of the songs are very tragic," she says, "but I don't think this is a sad record."

Easy Come, Easy Go features a broad assortment of cover songs — everything from old tunes like Dolly Parton's "Down from Dover" to newer songs by The Decemberists and Neko Case. Of all of them, Faithfull says, she found Duke Ellington's "Solitude" the most difficult to interpret. It's been sung by many, but Faithfull looked to Billie Holiday's version for inspiration. But she by no means tried to emulate Lady Day.

"I sing it as me. You just can't. It would be cheap," Faithfull says. "What I'm doing is expressing the song in my own emotional connections."

Featuring a wide range of collaborators and musicians — Rufus Wainwright, Sean Lennon and Marc Ribot, to name a few — Easy Come, Easy Go makes generous use of full arrangements. In particular, Randy Newman's "In Germany Before the War" gets a lush, cabaret-style arrangement in the style of Kurt Weill.

In an interview with host Liane Hansen, Faithfull takes her through the story behind singing Morrissey's "Dear God Please Help Me" and the beauty of Merle Haggard's "Sing Me Back Home."

An audio link will be available at the top of the page sometime around noon ET Sunday. Click the "Listen" link to hear the full interview.