Accessibility links
Rookie Dog Sledders Left Panting On Iditarod Trail The leaders on the 1,000-mile Iditarod trail to Nome, Alaska, are racing for fame and fortune. But hundreds of miles behind, a group of rookie mushers are slowly plugging along, just trying to finish the legendary race and make it to Nome in one piece. 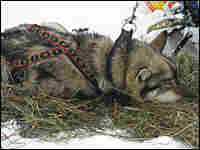 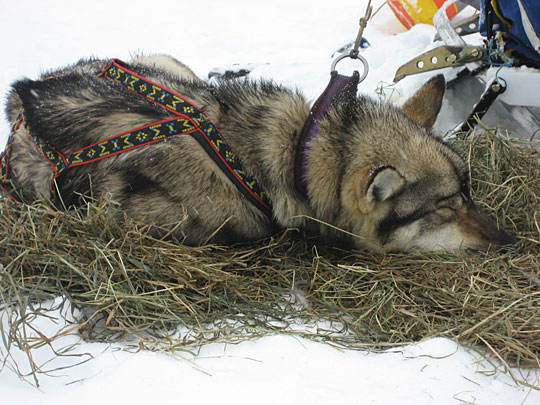 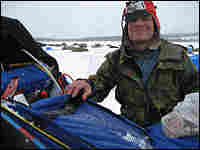 Packer is a physician from Wasilla, Alaska. This is his first Iditarod. Anne Feidt for NPR hide caption 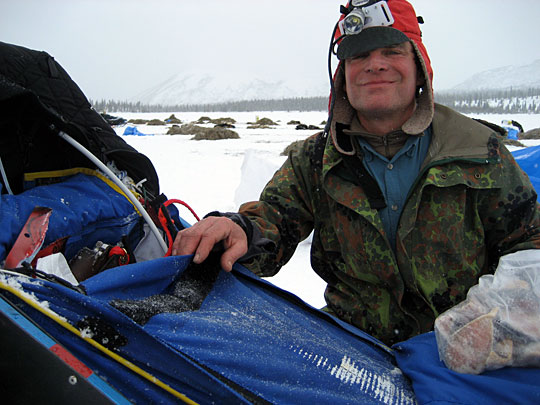 Packer is a physician from Wasilla, Alaska. This is his first Iditarod.

Dozens of mushers and their dog teams are making their way across the Alaskan tundra right now, competing in the Iditarod Trail Sled Dog Race.

They're traveling more than 1,000 miles over the harshest terrain in the state. The race leaders are a little more than halfway through the race. Far behind them, a group of rookies are plugging along, just trying to make it to Nome in one piece.

Dr. Lou Packer looks like your typical rugged Alaskan outdoorsman — he's even wearing an intimidating camouflage snow suit — but he doesn't sound like one when he starts cooing about his dogs.

On a normal day, Packer would be running an urgent care clinic in Wasilla, Alaska. But on this day, he's adding up his multiple bruises and considering himself lucky to have made it this far.

"It's just terribly steep terrain — you don't know where you're going," Packer says. "I mean, it's just whoosh when the dogs go downhill. They accelerate, and you're just roaring down these things at like breakneck speeds. It's pretty amazing."

Fourteen rookie mushers are making their way to Nome, more than 100 miles behind the race leaders. They are spending about two weeks running their dogs day and night, camping in the cold when they need rest. By the time it's over, they will have mushed over mountain ranges, up frozen rivers and along the icy Bering Sea coast.

The rookies arrive at the Rainy Pass checkpoint, an isolated outpost on a snow-covered lake nestled between high peaks. Kim Darst, a helicopter pilot from New Jersey, settles her dogs in for a well-earned rest. Then she takes a metal bucket over to a small water hole, cut into the frozen lake.

"This might be the most exciting part," says Darst, who has been dreaming about participating in the Iditarod for a decade. "I can't believe it. I'm sitting there on the trail and I don't think it's sunk in yet."

Jen Seavey, 22, is one of the youngest rookies on the trail. She crouches down in the snow to put tiny booties on her dogs' feet.

Her dogs look like they would prefer to keep napping, but Seavy is bright-eyed.

"I'm not tired, and [I'm] enjoying it and looking forward to each run," Seavey says. "It's really cool!"

Packer also seems to be having a good time. He even jokes about the potential danger.

"No musher has ever died doing this, but of course my wife is convinced I'm going to be the first one to get that dubious honor," he says, looking down and frowning at his overstuffed sled. It has a classic "rookie bulge" on top: bursting with a lot of unnecessary gear — including two sleeping bags.

But he says he's intent on surviving the experience, so some of that extra stuff might come in handy.