Accessibility links
Chris Brown's Assault Case Sparks Dialogue When the singer allegedly assaulted his girlfriend Rihanna on the streets of Los Angeles, the tabloids had a field day. But the case has also inspired a serious dialogue about domestic violence. This week, protests from outraged parents led Brown to drop out of a televised awards show. 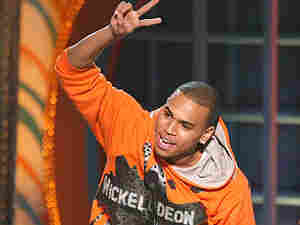 When the singer Chris Brown allegedly assaulted his girlfriend Rihanna on the streets of Los Angeles, the tabloids had a field day. But the case has also inspired a serious dialogue about domestic violence. This week, protests from outraged parents led Brown to drop out of a televised awards show.

And while reports have the couple in the studio, recording a duet, the public isn't necessarily ready to forgive and forget.

Brown, 19, looks like the nice boy next door. He fills concert halls with screaming young girls who love his music and his sweet face. Pop star Rihanna, 21, has been touted as the next Madonna. But these two young people in the public eye have become symbols of something bigger than their music. Oprah Winfrey raised the issue on her show for the second time Thursday.

Winfrey isn't the only one. Parents and children are discussing the couple's dilemma. And, while parents are clearly indignant about the assault on Rihanna, their children are often more measured.

In Los Angeles, Carlyle Davis, Erin Hill and Shalya Matthews are chewing over the latest details. All three girls are 17-year-old high-school seniors. Davis says that at her school, some refuse to believe Brown is at fault. Hill says there's a lot of speculation about the chronology of who hit whom.

"Chris Brown lovers defend Chris Brown till the day they die," Davis says. "It's like, 'I don't know what happened, but he must have had a reason. He must have been provoked.' "

When a photo leaked showing Rihanna's injuries, Hill says, "I was horrified. You know, there were a lot of stories going on at that point, and when people saw the picture, it really hit everyone how serious it was."

It was serious enough that Brown has now pulled out of this year's Nickelodeon Kids' Choice Awards, where he was an odds-on favorite. Matthews says she understands Brown's decision.

"I think the reason he pulled back was he just wanted to stop the drama," Matthews says. "He still wants to watch what he does and not affect other people, his fans."

It's precisely the role-model status of both Chris Brown and Rihanna that has domestic-violence experts worried.

Angela Parker does outreach with teens on domestic violence for the Jenesse Center in Los Angeles. She says that many of the girls she counsels don't see themselves as victims. She also says that people who think Brown was justified in beating Rihanna because she may have hit him first are comparing apples and oranges.

"A lot of the young girls I talk to feel like if somebody hits you and you hit them back, you're not in an abusive relationship; you're fighting each other," Parker says. "It's an unfair correlation that people are making. Okay, so maybe she hit him upside the head, but does that mean that she should have been punched in the face with her head up against the glass?"

Adrienne Lamar, associate director of the Jenesse Center, says she believes teen girls and boys have to be taught how to manage their anger and keep their hands to themselves — but they need help.

"These are the messages that are lacking because of the absence of strong role models," Lamar says.

While a few black male celebrities have stepped forward to condemn Brown's behavior, Lamar espresses frustration that so many refused to comment initially or decided to reserve judgment.

Brown will be arraigned on felony assault charges in April. Erin Hill, 17, predicts that Rihanna will eventually bounce back, but says a rebound will be harder for him.

"He's already getting labeled as Ike Turner," she says. "There's no coming back from that."

Maybe there is. Reports say the couple are currently in the studio recording a duet. The subject: love's challenges.