Accessibility links
Rebuilding Courtney Love, One Song at a Time Producer Linda Perry has worked with Christina Aguilera, Pink, Alicia Keys and the Dixie Chicks, and she discovered James Blunt. But Perry faces what may be a producer's most formidable challenge: rehabilitating the career of Courtney Love.

Listen
Rebuilding Courtney Love, One Song at a Time 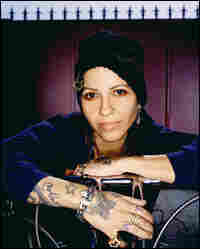 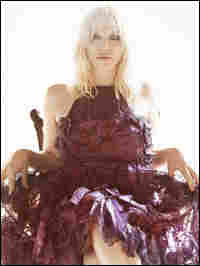 Courtney Love knows a little something about self-destructive women — the main topic of a new song about a working girl named Samantha. hide caption

Courtney Love on Wanting to Work with Women

Producer Linda Perry has worked with Christina Aguilera, Pink, Alicia Keys and the Dixie Chicks. She also discovered multi-platinum singer James Blunt. But Perry faces what may be a rock producer's most formidable challenge: rehabilitating the career of Courtney Love.

Love's subversive impulses made her career. Critics declared her 1994 album Live Through This one of the year's best. Leading her rock band Hole, Love would dive from the stage and crawl back, bruised and bleeding, her clothes ripped. But the singer always aspired toward mainstream success like that of her late husband Kurt Cobain's band, Nirvana. Love hopes a new song about a working girl named Samantha will join the canon of great rock songs about women, such as Sting's "Roxanne" or Fleetwood Mac's "Rhiannon."

Perry hopes this album will bring forth an older and wiser Courtney Love. Of late, Love's weight gain, arrests and drug abuse drew attention away from her talents.

The excesses of that culture drove Love to rehab a year and a half ago. While she was there, Perry sent her a guitar, and together they wrote all the album's songs.

Perry has known Love for decades. They became friends in San Francisco where Perry sang for the band 4 Non Blondes, remembered now for one massive hit, "What's Up."

Love says that Perry's ability to produce a wide range of music — from glossy pop to string quartets — gives her traction in the competitive boys' club of rock 'n' roll. Perry comes across as edgy and dark, but she has a need to write commercial hits — the kind that rebuilt the career of Christina Aguilera.

Not everything Linda Perry touches turns to gold, and not every rock star gets a second chance. Love has already had about seven of them. The album, called Nobody's Daughter, is expected to be released sometime this year.

Album
Live Through This
Artist
Hole