Accessibility links
Wooing A Blood-Thirsty Vampire Fish It costs $20 million to battle the invasive lamprey in the Great Lakes. The blood-sucking fish is killing off many species of native fish there. But scientists have developed a "love potion" made of the fish's own pheromones to lure the lamprey into traps. 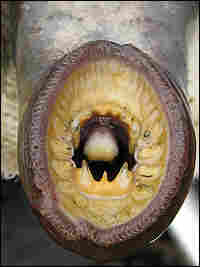 Lampreys latch on to fish or marine mammals with their sucker mouths and drink their hosts' bodily fluids. Ann Dornfeld for NPR hide caption 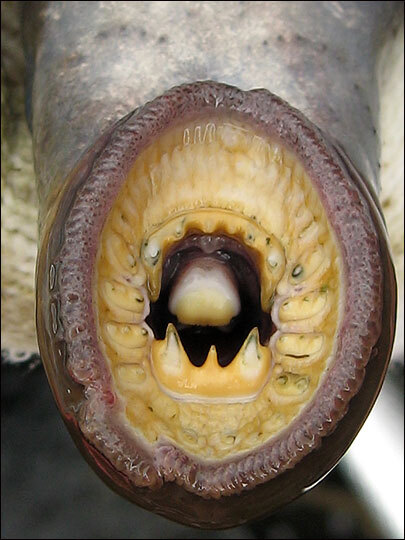 Lampreys latch on to fish or marine mammals with their sucker mouths and drink their hosts' bodily fluids.

A team at Michigan State University has discovered how to create sort of a "Love Potion No. 9" to attract an invasive species of fish out of the Great Lakes.

Originally from the Atlantic, the lamprey is usually considered a parasite. But in the Great Lakes it has achieved the status of predator. Researcher Nicholas Johnson says the fish is killing off other large predator species and has "completely changed the ecosystem."

Lampreys use their suction-cup-like mouths to attach to other fish and feed off their blood. Their prey is often left for dead, giving the lamprey the moniker "the vampire fish."

The U.S. Fish and Wildlife Service spends $20 million annually to control the jawless fish. Now they may have a new weapon to combat the invasion — lamprey perfume.

The substance is created from the pheromones the male lamprey releases to attract females during mating season. Johnson and his team are using it to redirect the females into traps.

So far, the perfume has worked well at test levels. "We're going to expand our research and look at 20 different streams in the United States and Canada," says Johnson.

He says the chemical is not unlike what fragrance makers create to help humans attract their mates. Instead of floral or food scents, however, Johnson's perfume is the fishy smell of blood-sucking love.