Accessibility links
Edmar Castaneda: A Jazz Harpist Who Wants 'A Party With The Angels' Colombian emigre Edmar Castaneda came to the U.S. as a teenager and fell in love with the music of Charlie Parker and Chick Corea. So he decided to use a traditional instrument of Colombia's cowboys to play his own form of pan-Latin jazz. 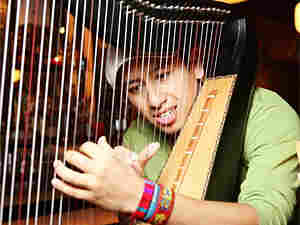 Edmar Castaneda plays a traditional instrument of the cowboys who work the plains of Colombia: the harp. It's much lighter than the harp played in symphony orchestras, and it plays a key role in Colombian country music, where songs can become elaborate boasts or cutting contests.

Castaneda says he fell in love with the instrument as a boy in Bogota — and that, save for a few weeks of lessons, he is self-taught.

When Castaneda was 16, though, he moved with his family to New York. There, he discovered jazz — Charlie Parker, Chick Corea. He started playing in restaurants and toting his harp to jam sessions. He's created a personal style that blends elements of both kinds of music.

"My father always wanted me to be a trumpet player," Castaneda says. "Then I came [to the U.S.], and in high school here, they have bands. They didn't have harps. And then I wanted to play jazz. So I went to college playing the trumpet, and it was great, because I learned all the jazz improvisation, and I just passed it to the harp."

These days, he performs with the likes of singer Lila Downs and Latin jazz bandleader Paquito D'Rivera. Castaneda recently tried to describe his approach to playing to independent producer David Schulman for the Musicians in Their Own Words series.

"Rhythm, the groove, you know? I like a lot of groove," he says. "Sometimes, [audiences] think of the harp as, like, angels' music. So I say, 'Oh, we're going to have a party with the angels.' "

Click the link at the top of the page to hear the full feature with Edmar Castaneda. 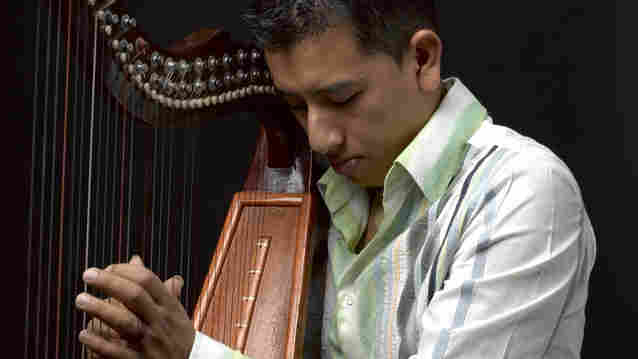 Ozawa Hall is a lofty, beautiful barn in the Berkshires -- or maybe a riff on a country church -- with natural wood and great acoustics. For the big concerts, the Tanglewood Jazz Festival throws open the back doors to listeners on the lawn. And tonight, the superb acoustic music of Edmar Castaneda and his trio fill the hall and beyond, mesmerizing the people in the seats and the picnickers on the hill.

Looking in, they see an intense young man on his feet, his body wrapped around his Colombian harp -- slightly smaller than the classical harp. There's a lone trombonist and, sitting on a box with a hole in it, surrounded by drums and toys, a quick-handed percussionist. That box, by the way, is the South American cajon, energized by slapping. Finally, to be regarded with anticipation, there is an unmanned set of vibes.

Castaneda -- born in Bogota in 1978 -- is humble, and his story impressive. His father is a musician, and his mother took Edmar and his sister to classes in joropo dance: folkloric dance, accompanied by the harp. At 13, young Edmar began to play. Then, like many Colombians, his family moved to the New York area. Castaneda's official instrument in high school and Five Towns College was the trumpet.

But nights, he worked in restaurants as a solo harpist. While people enjoyed their dinners and his music, Castaneda was inventing himself as a one-man band -- melody and harmony, bass lines, percussive effects and all.

Trombonist Marshall Gilkes and drummer/percussionist Dave Silliman are ideal bandmates for Castaneda. A wonderful melodist, Gilkes dispenses funny sonic surprises. Silliman was a longtime member of the late Blossom Dearie's trio. Joe Locke is a four-mallet man. On his most recent JazzSet, Locke led a quartet at the Bach Dancing & Dynamite Society in California. He instigates and participates in projects both diverse and international. Only 48 hours before our Tanglewood concert on Aug. 29, 2008, this group played at a festival in Eilat, Israel. They traveled like crazy to get here and offer this set of beautiful music.

Our Surround Sound recording is by Duke Markos, with assistance from Tanglewood Technical Director Tim Martyn, as well as Yujin Cha and Jeffrey Dudzick.